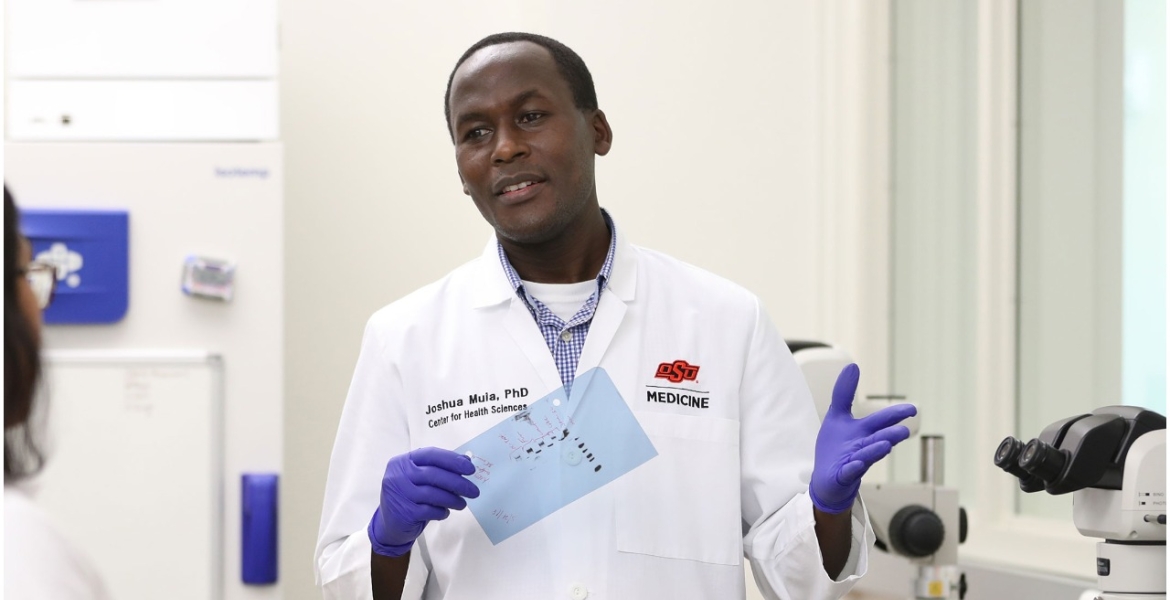 Kenyan biomedical scientist Dr. Joshua Muia (Ph.D.) has been awarded a $1.67 million research grant in the US.

The researcher, who joined the faculty at OSU Center for Health Sciences’ School of Biomedical Sciences in 2020, hopes his research into two tiny enzymes can help identify and possibly treat a rare blood disease as well as the most common form of heart disease.

“Applying for a grant takes a long time and a lot of work. Getting a grant isn’t easy, especially an NIH grant,” said Muia.

His research focuses on two enzymes in the ADAMTS (A Disintegrin and Metalloprotease with ThromboSpondin motifs) family — ADAMTS13 and ADAMTS7.

“It’s a delicate balance of bleeding and clotting. We need clotting to stop a bleed, but we don’t want to form blood clots,” added Muia.

Whether through genetic mutations or an autoimmune response, a person’s ADAMTS13 can become dysfunctional and can cause serious health issues, including the rare blood disease called thrombotic thrombocytopenic purpura (TTP) where blood clots form in small arteries in the body.

Muia has already developed an ADAMTS13 test that is compatible with human plasma and plasma from any species.

“You can research similarities and differences between humans and other species in terms of the ADAMTS13 protein. For example, right now, there’s no known natural inhibitors of the ADAMTS13 enzyme, which can be exploited as therapies for bleeding disorders caused by too much ADAMTS13 activity. By looking at other species we see the differences and we can understand how the enzyme is regulated and if there are other avenues to inhibitors,” he said.

Muia previously worked on a research team at Washington University School of Medicine in St. Louis, where they discovered how the ADAMTS13 is self-regulated as well as developed a novel ADAMTS13 test, which was used to screen patients for a TTP clinical trial.

The grant will facilitate further research into ADAMTS13 across species and tests that could hopefully be approved by FDA in the future.

“The grant means turning the ideas we have into a reality. What we discover can eventually help patients. That’s the ultimate goal — how can our work help patients in the future,” he said.

The other ADAMTS enzyme Muia will study is ADAMTS7, a lesser-researched enzyme in that family. Muia says there seems to be a strong connection between ADAMTS7 and coronary artery disease, the most common type of heart disease.

Haya yote ni mazingaombwe ya kisayansi. But whatever it means, Congrats to Doctor Muia!!