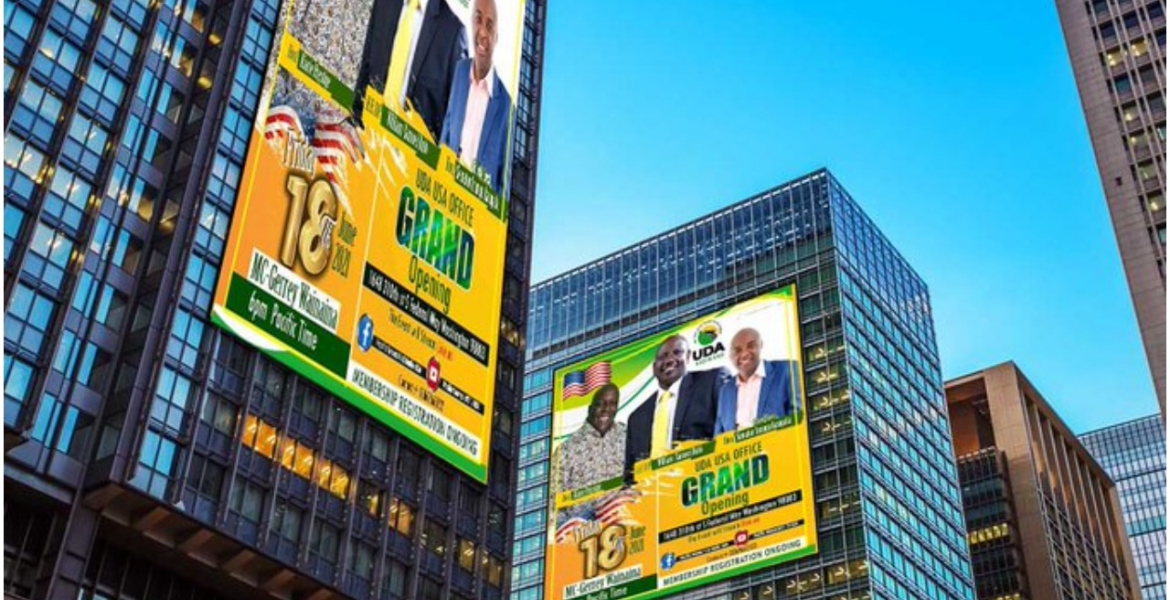 The United Democratic Alliance (UDA) party has officially launched a liaison office in the US.

The office was opened in Seattle, Washington on Saturday in a ceremony graced by Murang’a Senator Irungu Kang’ata and attended by Kenyans both physically and virtually.

Deputy President William Ruto, who attended the event via video conferencing, pledged to support Kenyans living and working abroad if he is elected president next year.

Some of the promises he made include setting up a ministry that will exclusively deal with issues affecting Kenyans in the diaspora.

"We believe that the diaspora should also participate in the politics of our nation. There is no reason why the diaspora does not have representation in government," said Ruto.

He added: "...a clear ministry that strictly works on matters to do with the Kenyan community in diaspora. You should have an opportunity to contribute. There is no taxation with no representation."

The opening of the office is part of Ruto’s strategy to widen his networks and reach out to diaspora voters ahead of next year’s general elections.

The office is expected to coordinate party activities, including registration of diaspora members and mobilization of campaign resources in the US.

On Saturday, Ruto formally announced he will run for the presidency in 2022 on a UDA party ticket.

"Tuko rada. Tuko na chama cha mahustler, (We are ready with the hustler party.)," Ruto said while in West Pokot.

… i am sure he intends to fulfill these promises just like the ones he and Uhuru made when they ran for election the 1st time.

TIME FOR SMALL TRIBE TO EAT

Obstruction of beauty to the building..peleka huko NBO...Who allowed foreign politics in the Land of the free and home of of the brave..vice versa.

Kubafu office to siphon diaspora money from the dummies who line up with the most corrupt DP in Kenya.

The diaspora have no much effects in Kenya politics! Diaspora Kenyans will not vote for a murderer and a thief! Kenyans are looking into the good future of the country away from the hands of those who have stolen from Kenyans in the past! Ruto is not part of the future equation to lead Kenyans!

The Kenyans in Seattle are mostly Kikuyus. They’re not even that many.

Diaspora has no votes. Maybe they are looking for money.

Votes are in Kenya.

Kenyans are full in Kenya.

The money stolen by Ruto is being wasted across the world! Those in Ruto’s team like kangata are not worthy Kenyans to chart a away for the future for the Kenyan people!

They are all interested in filling their empty stomaches and blatantly stealing our Coffers! DP Ruto has no vision for the future! All he wants to do is to be in a position to steal more and to kill those who tend to block his stealing!

Just make sure diaspora can vote online, IEBC.gov.co.ke at least and have access to all citizen benefits. Issue them diplomatic passports to make life easier.

Guest777:diplomatic passport to the diaspora is not a good thing. There are legal complications that may arise. Private citizen is the real deal.

Who is insane to elect Ruto as president of Kenya.?