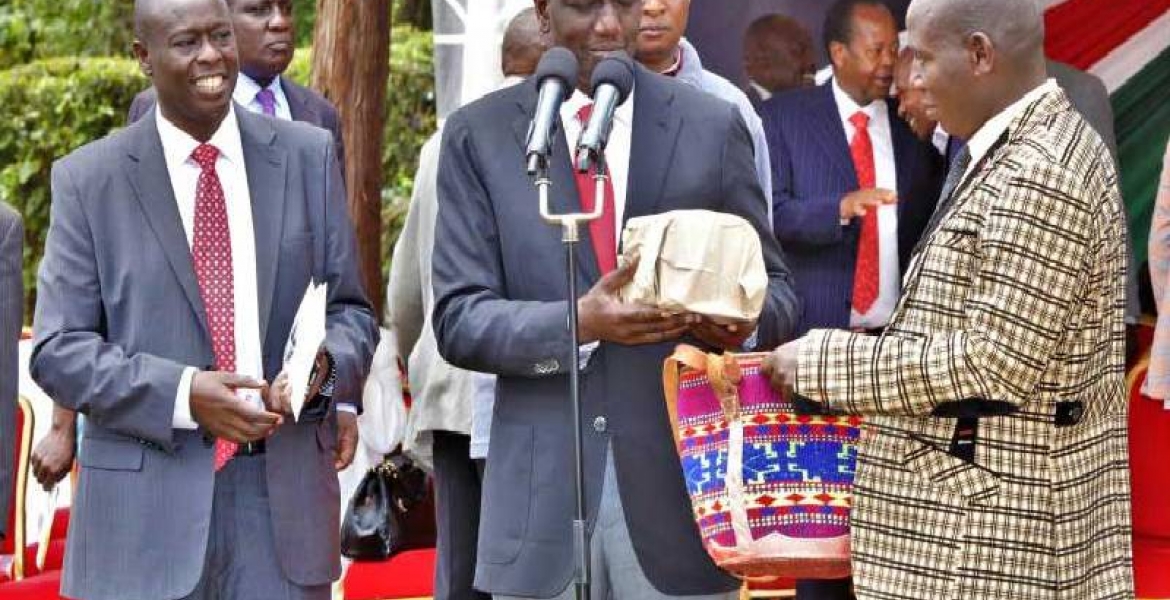 Prof. Mutua particularly raised questions over the colossal donations DP Ruto makes to churches in different parts of the country during weekends.

“William Ruto, the country’s numero dos, has been the main “benefactor” to the Kenyan Church. Every weekend, and sometimes twice on Sundays, Mr. Ruto carpet-bombs churches in Central Kenya and Luhya country with wads of cash. The clerics have received the loot as though it was manna from heaven. The mullah isn’t in the thousands, but tens of millions of precious shillings,” said Mutua in an article published in a local daily.

He added: “I should be forgiven for thinking that Mr. Ruto has more money than God. That’s one of the reasons why one would dump such colossal sums in the house of God.”

The author further noted that Ruto’s failure to publicly declare his wealth could be translated to mean that he is hiding something.

“Mr. Ruto himself hasn’t helped his case by failing to produce an audited account of his wealth and patrimony if any. The law requires that every public officer declare their wealth on the pain of perjury.”

“That Mr. Ruto hasn’t done so leaves the impression that he has something to hide. More importantly, it would be foolish for any shrewd businessman to drop money as though it was useless confetti. But when challenged, Mr. Ruto avers, tongue-in-cheek, that he’s investing in heaven and no one should tell him how to tithe,” Prof. Mutua added.

Last Sunday, Ruto made personal contributions amounting to Sh4 million in two church fundraisers in Murang’a and Laikipia. Speaking in Laikipia, Ruto told off those who continue to criticize him for his acts of generosity towards the church.

“There are some people who want to correct the Bible by saying that blessed are those who receive rather than those who give,” Ruto said at Nanyuki Stadium on Sunday.
He warned a section of opposition MPs who are planning to enact a law to cap the maximum amount politicians can contribute in church fundraisers to Sh100,000. Ruto said by doing so, the MPs were inviting God’s wrath.

All the money he has are Kenyan Citizens' money! he acquired through dubious means while Uhuru is high on meth, green weed and Etoh!

All these churches need to be banned and religious education removed from the curriculum.

Please never compare a human with God. No comparison' God is the giver of life and every success a human has achieved.
And Mutua never judge.

Men and women of God walk in the light. If one cannot declare his/his wealth then it means there’ something fishy about it. It’s clear what Ruto is doing. He’s hoodwinking the churches to vote for him as president. He’s buying the presidency. That’s called daylight bribery. You may remember his father Moi used to do the same. If Ruto loves God, improve the life of the youth, education and health of the people of Kenya. I challenge you Ruto to build a cancer center for people with cancer to get treated locally. Wacha huu upuzi wa kanisa. Do something that benefits a wider population.

Thanks Mutua for calling out this ujinga of Ruto. Let's cap church contributions at 100k and prove to Ruto that the only wrath we incur is his. God has no time for such nonsense.

I have always followed Makau Mutua's contribution to National Debates. What I have always observed, is a Common Denominator. Some may see it as 'lack' of a Common Denominator. Before Kibaki was elected President, Mutua 'predicted' it would be Kalonzo. Before Uhuru was President, he not only again predicted that Kalonzo would again win, but he declared that he would not recognize the validly elected President of Kenya, if it was Uhuru. I have followed his hypotheses, and Judgements. Societies are different. His arguments are American, not Kenyan. But American Law does not work in Kenya, and Kenyan Law does not work in America. My take? He is a 'fraud', trying to take maximum advantage of both worlds. He is respected in the US as a distinguished professor, because he was trained there, and in Kenya, as a 'human rights activist'. He has always had 'catch phrases', like Raila. And like Raila, he never wins at his game. Yet the lesson that team Uhuruto taught us in 2003, and in 2013, that Insanity is repeating the same thing, and expecting different results, has never dawned on Mutua, Kalonzo, or Raila!

kenyan American, that is a simple comparison since the guy acts so "holy" while we all know that he's a damn thief and the Kenyan church is corrupt!

Makau,you have never told us how much you earn. Neither have you ever asked your mentor Raila where for example he got the 300 million he brought to Kenya once or the 80 million that had been stolen by his former driver from his office. You political activists are hypocrites.
Imagine one of your friends resigned from a rich organization here in the US to work for the poor nation Kenya. Was he not going to steal from the government to make up for what he left here. Instead of you asking him why he did it, you applied to take over from him.

easy....is the money drawn from a bank account? If not, what/where is its source? Follow the money..

This fellow Wananchi, good people of this earth, is called Moi re-incarnation. He is taking us back to the Moi era and nothing good will come out of it. If elected, everyone will pay back all these generosities he is doing a 100 times more. Just wait and see!!

Ihave no problem with Ruto giving the church millions. Where it ends is my concern. Does it take care of the orphans, poor children without school feels,or clothing?.Does the money pay for hospital bill for those unable to? Or does the money go to lavish life styles of preachers,and their mistresses...
If true that Ruto is buying votes,then the sellers are worse than Ruto for they are crooks hiding in the house of God.No voting with their hearts,but pockets...
Churches should go back to spiritual work.And that work does not need a building.much less afancy one.I dont believe that Jesus built any house of worship.Shouldnt christians follow Jesus,by example?May be except not the "unmarried"part?Yes it would be nice if preachers could heal the sick,and make cripples walk,and blind see, just like Jesus did.That would send alot of people back to church.How come it does not happen? Dont they pray well?Or Jesus never really did what he is purpported to have done...My two cents.

I couldn’t just imagine a whole professor making such a comment “Ruto has more money than God” Did he lack a simple comparison fact? I’ve heard this Mutua is trying to run for an office. We should be careful as what he said doesn’t portray smart leadership skills!

I feel that much i I would like to ignore Mr. Mutua’s article, I have the urge to make a short comment or is it a question? Does he know who God is that he can compare Him with a human being. Why would he think of coming up with such a headline?