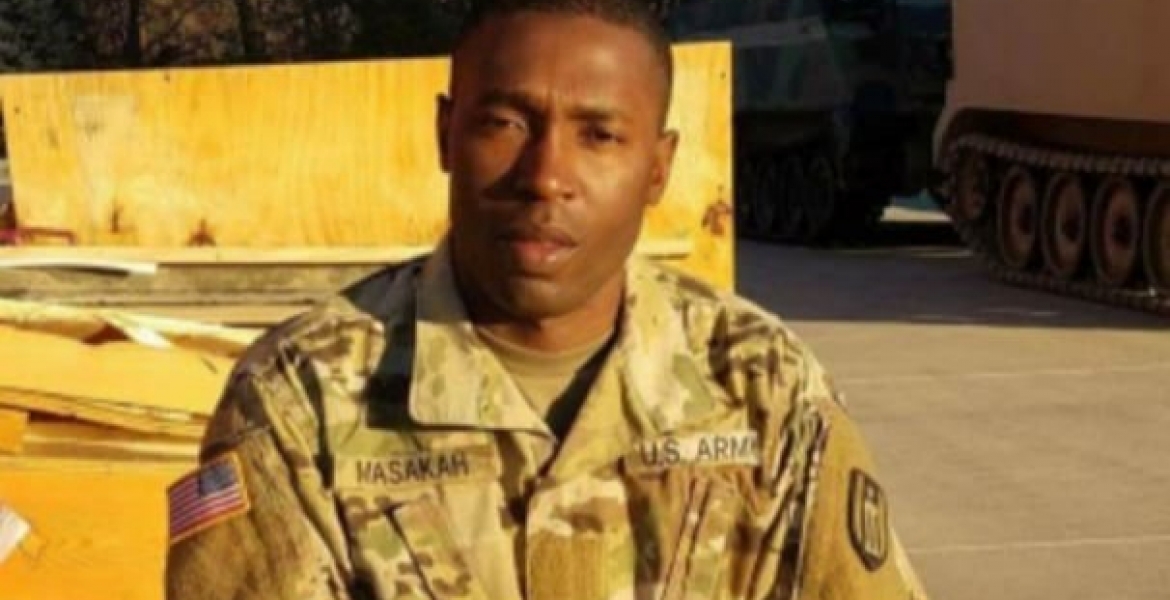 Ikolomani Member of Parliament Bernard Shinali’s first-born son has a passed away in the United States.

35-year-old Chris Atema reportedly drowned in a swimming pool in Arizona on Friday afternoon while attempting to rescue a young girl of Canadian descent from suffocating in water.

Doctors said the girl Atema was trying to rescue was taken to hospital after divers removed her from the pool and is in a stable condition. Divers did not manage to save Atema’s life as it was too late.

Until he met his death, Atema was serving in the US Army as a marine soldier and was reportedly on holiday with his family when the incident happened.

Atema’s wife is nine months pregnant and was expected to deliver before the end of this week.

MP Shinali’s elder brother Robert Ayisi told Daily Nation that the family cannot explain the death of their son at the moment.

“We received the news about his death from a relative who works with him in the Navy. Masaka stays and works in Illinois State but had traveled to Arizona for a holiday with his family when he met his sudden death,” said Ayisi.

Plans are underway to have the deceased’s body airlifted to Kenya for burial.

It is too painful....God have mercy for immediate family.

Condolences to the family and friends. With all due respect, how does a US Navy/Marine drown in a swimming pool? I thought they were profession when it comes to masses of water. Possibly MI in the water or something else? Kiulizio tu.

That’s like asking how lifeguards die in water..or how experienced hikers die while hiking.
Death happens even in unexplainable situations. May dude RIP

Here's your answer: How and why do drivers with 20 years road driving experience die while on the road? Especially when they are all by themselves? Answer this simple, common sensical question and you gona be in the know

So we are conditioned not to think or query when things are not adding up?

To answer your question, one needs to be a trained life saver to know how to handle such a situation. It is one of the first thing they train you as a life saver. It is almost impossible to rescue a person who is still vigorously struggling to catch air, because they will drown you no matter how good of a swimmer you are. Instead, you throw you in
floater, or go in with a floater/raft/wood etc.. to help you stay afloat or last result you wait until the person calms down so you can pull them them up. My condolences to the family. Poleni sana.

Condolences to the family and friends. With all due respect, how does a US Navy/Marine drown in a swimming pool? I thought they were professionals when it comes to masses of water. Possibly MI in the water or something else? Kiulizio tu.

"Atema was serving in the US Army as a marine soldier" John Wanjohi. For your information, A US Army Soldier is not a US Marine. Those are two different branches of service. US Army=Soldier, US Marine=Marine and US Airforce=Airman, and US Navy=Sailor. Please post accurate facts.

There is more to this story than its being reported. When i read the story; 1. Marine drowning in a swimming pool??? As someone indicated above, Marines are not typical military group,'The Few, The Proud' is a special & elite branch of military because of their 1st class training. The other issue is he was able to safe the kid from drowning but could not safe himself; so how did he do it? My only 2 cents tells me the guy was intoxicated or probably killed and thrown into the pool to seem like it was an accident. Otherwise it does not make sense, my condolences to the bereaved.

So sad. Pole to the family, that’s got to be very painful.
Hearts broken. We don’t know the circumstances but it’s so Sad that they were able to save the mzungu kid he was trying to rescue but they couldn’t rescues him? #StayWoke people 😭

Poleni sana sana to the family and friends. May God give you strength to endure this loss. By the way, bwana editor, please note that the guy served in the US Marine and not US Army as a marine soldier. The two are totally different. Army is Army, Marine is Marine, Navy is Navy and Coast guard is Coast guard. If in doubt, wait till you meet a Marine soldier and then try calling them an Army guy, we! utakiona.