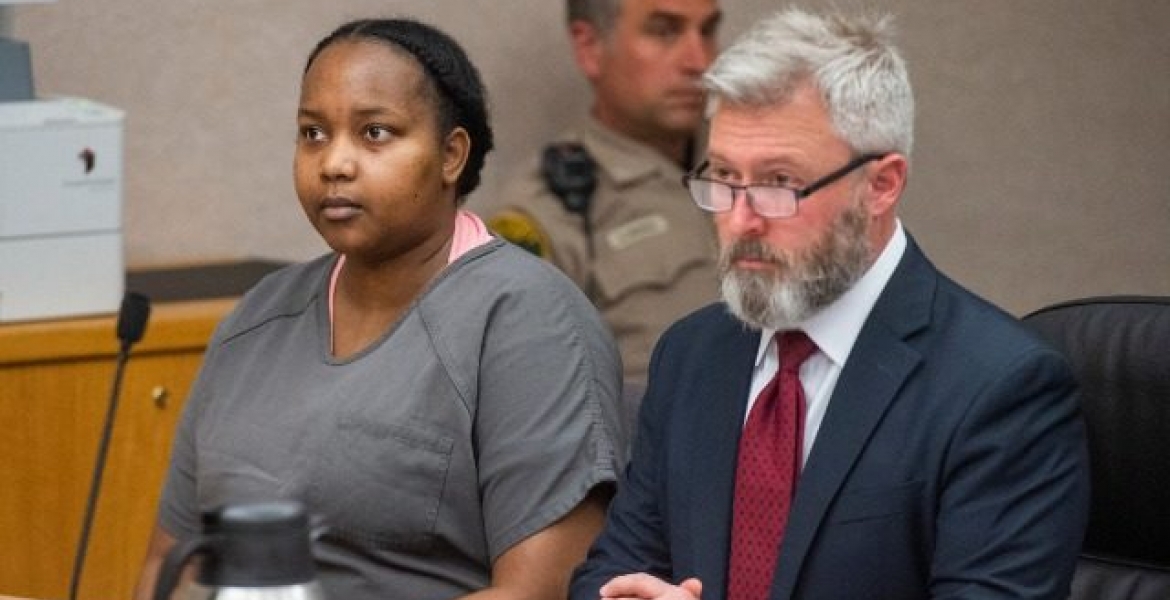 A Kenyan woman charged with vehicular homicide in Tacoma, Washington has pleaded not guilty by reason of insanity.

26-year-old Win Gikonyo  was driving her new Hyundai Elantra near 84th St and McKinney Ave on April 18, 2018 at a speed of more than 100 miles per hour. As she tried to pass two cars, she hit a car being driven by 60-year-old Marianne Burton, who was delivering pizza. Burton died at the scene.

Blood tests conducted on Gikonyo at the time indicated she was not under the influence of drugs or alcohol at the time of the crash. Instead, her lawyer says Gikonyo was suffering from hallucinations and was hearing voices shouting commands in her ear.

“She was hearing voices shouting commands in her ear.. She felt that she could communicate with the traffic lights,” defense Attorney Michael Stewart told the Pierce County Superior Court on Tuesday, adding that as such, sh was not legally responsible for her actions at the time of the accident. A report by a psychologist at Western State Hospital earlier this month diagnosed Gikonyo with “unspecified schizophrenia spectrum or other psychotic disorder,” and she is said said to be taking medication for her diagnosis.

Meanwhile, Burton’s children say Gikonyo stole her mother from them, and question her claims of insanity. Amber Falaschi, Burton’s daughter, told the court that Gikonyo did “things that insane people don’t generally do,” such s holding a job and buying a car. “She stole my mother’s life from everyone who knew her,” Falaschi added.

Buton’s son James Burton said his mother was less than two years away from retirement when she died.

The judge noted that Gikonyo has prior hospitalizations for mental health treatment but that for some reason she had stopped taking medication at the time of the accident. He ordered her held without bail pending a hearing to discuss possible mental treatment options going forward.

Hehehehe anyogwe aache hizi maexcuses za going insanity ndio aachiliwe.Why do 100miles in a busy street in city??This is serious case but as we know the usa system is broken she will walk free especially if she continues yapping insanity n mental.

What's Going on with Jubilee. Now Gikonyo's DWI stands to Serve her Time of Years (if not Life) in some US prison.

Nb: If it were in Texas: She would have had to Forget the Rest of her Life.

Why do you take joy in other's misery. I'm not a psychiatrist but I am well aware mental illness is real. I am not saying you are I'll but anyone who who relishes the misery of others needs help. Please seek help. By the way do you take the same joy in these headlines?
https://nairobinews.nation.co.ke/life/nairobi-dangerous-place-for-women
https://sokodirectory.com/2019/04/crime-rate-in-kenya-increased-by-13-2…

Every group or forum has a mentally disturbed person who says all kinds of weird things. On Mwakilishi, Mkenya Halisi is our madman.
He ropokwas ovyo ovyo and is very entertaining sometimes. Let him be.

FYI, your deportation is not proof of a broken system but rather proof of a well functioning system. While wealth gets you better lawyers, murder is not something you get away with. If judged insane, she will not see the outside world for a long time if ever. Unlike that lawyer who killed his son, she will face justice, the consequences are the only unknown here.

Do you guys ever take anything seriously? Mental health is more prevalent than most people realize and should not be a subject of jokes or ridicule. You pray and hope you are not afflicted by the disorder. And may your children and siblings escape the malady.
May the Lord help this poor lady during and after her ordeal.
And please, stop the juvenile comments.
I wish Mwakilishi would sensor some comments.

"Love Of or Pressure for Money in US is Source of Stress (especially Mental stress) that leads to INSANITY.

She might End up in a Psych prison for Life.

She is wearing nursing uniform. Is she treating patients? That is even more dangerous.

Nope. She is Kirinyaga governor.😕

# Kenya I take it that you are joking.That's a prison uniform.

This is just white people being haunted by the system they created where people do mysterious things and get away with insanity plea!
This is a miracle she will be afforded🤔

heeeeee this is funny Gikonyo ati you were hearing voices and you thought you could communicate with the traffic lights.And tell them what???

All four of you 1st responders, ...your ignorance is nauseating. I hopen to God that you never ever have to deal with mental illness, especially schizophrenia. FYI, schizophrenics are highly intelligent people: part of the reason they stop taking medication because it slows them down. For your ignorance, pleaae check out "the soloist" or "a beautiful mind". I write as one whose family members have this "genius complex" (thought to be hereditary).Two have topped Kenyas KCPE and KCSE. One was admitted for Medicine & Surgery at UoN... which he excellently rejected in a wonderfully written essay. He even refused a scholarship to Havard! Who does that?. But God is great, after 5 years of family aiming in the dark, he took on IT and goes to MIT yearly for conferences courtesy of his US based employer. One of pioneering African innovators and developers. Both did try suicide a couple of times - they said Life is useless and explained how. All this running around, rat-races only to die. Read the Ecclesiastes, says the samething. The lady: the bible prophets talk to her. And when they do, after she has skipped meds for a while, the lady can outrun 4 men and fly over the family high fence. Because she is getting commmands to go save the world. We have not found a normal with her because she skips meds at times and never tells the doctor everything. She is a linguist and CPK-2. It is one hell of a frustrating disease. For you guys to rubbish Gikinyo, I pray that you NEVER ever experience it. Now imagine some of her family members probably think like you do...and she is thinking "this is white people stuff" until she starts hallucinating. God forgive you.

@YawaBaane, thanks for enlightening people on this disease. There is no doubt this woman in question has a mental issue going on and unfortunately she will have to spend some good time in jail. I wish your affected family members well.

I'm glad , cops and others had gotten away with blatant murder, why should our sister rot in jail. Pretty sure she didn't do it on purpose

Only in usa u can become anything u want anytime.One hour ur somber other one if ur caught killing pple u state it's mental or insane.One day u have kids with a woman other year u state wewe ni shoga!One day u rape ye daughter or yr sons then u state ur mental??Bure kabisa to this so called heaven countries full of mental n devolish societies.

"It is better to keep your mouth closed(write nothing) and let people think you are a fool than to open it(write something) and remove all doubt." - Mark Twain

And none of that happens in Limuru, right?

My heart goes out to you, Win. It is really hard to get a good balance with the positive effects and the negative effects of the meds. Even though this awful thing has happened to you, I pray you and the Burtons will find peace and forgiveness. There is schizophrenia in my family and it is hard to understand and live with it. You are still a valuable person and don't ever forget it. Love, Doris

just one question @mkenyahalisi how many times did they deny your visa? your bitterness is beyond me. live and let live. if u not financially responsible of the so called shoga why does they bother u this much? You must be having some kidda disorder too because its not normal to be in such kidda hate. too much negative energy.... I hope one of ur kids,siblings or a relative will come clean and tell your ass wao ni shoga. snap out of whatever ur issue is this shogas aint going anywhere period!

Upon further reflection he may be engaging in self loathing like some anti-gay Republicans who are themselves trying to suppress their true selves. Halisi, in 6 days you might be able to share a big announcement with the denizens of the diaspora. If you have a coming out party, post a link and share with us. Ww aren't haters here.

What? Who taught you KiMARAGOLI?

It’s mentioned on the story that this lady was taking Medication prior to this accident. Do you guys read or you’re just too quick to judge? United States don’t lie. They will Supoena those medical records.