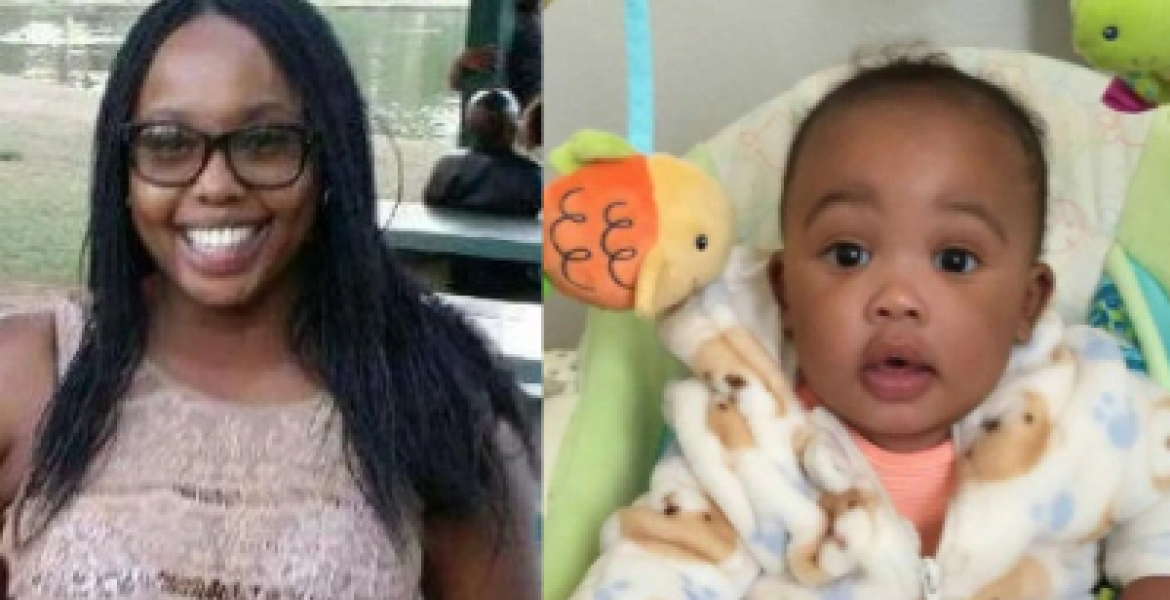 A 27-year-old American man has been sentenced to life in prison after he was found guilty of killing his Kenyan wife and son.

Kwame Adom Carpenter of Anaheim, California is said to have stabbed his wife Moureen Wanjiku Gathua-Carpenter, 24, and six-month-old son, Kyan Carpenter on June 22nd, 2015 using a butcher's knife after an altercation.

Kwame was handed the sentence on Friday by Orange County Superior Court Judge Richard M. King after he was convicted with murder two months ago.

“This was a horrific case. The image that is in everyone’s mind is the child crawling with a knife in his back," the judge is quoted by Orange County Register.

While making his submission before the judge, Deputy District Attorney Steve McGreevy stated: "This case has put the victims’ family, and the defendant’s family, through significant heartache.”

Ms. Wanjiku succumbed to multiple stab wounds at the scene of the crime while her son died at the hospital.

"While Carpenter brandished the butcher knife, Gathua-Carpenter held their baby and begged Carpenter not to hurt her," the court was told.

"Carpenter grabbed Gathua-Carpenter, threw her to the floor, stomped on her head and knocked her out, then stabbed her “over and over again."

Kwame was a Marine and was based in Camp Pendleton at the time of the killings.

Why not execute him?

violence to blacks is in DNA, some might use PTSD as an excuse to this case, but in real sense black Americans don't like Africans at all ( I had been thru that in my marriage with a Negro wife, just 5 years of our marriage it was a hot hell ) likewise when it comes to racism , the worst racist person in America is not white man, it is a black person my friend. If you want to prove me wrong, move out your neighborhood, go to neighborhood where you will hardly find a white neighbor then start life, or simply try to have neighbors left & right all blacks.
You are more likely to get asked by a black person " why are you here?" White neighbors will try learn about your country of origin , culture and even appreciate your hard efforts of achieving the american dreams blacks will simply look at you down, call you african shit but they want to be recognized as AA.
lastly, I would frankly say ,Sir God made a huge mistake in creating blacks, some thing some where was screwed up, no wonder blacks are the last grade of mankind anywhere you go,chief complainers and master jokers.
i know some might think " kichwa yangu mbaya" No no no!! prove me wrong !!

I beg to differ. Most Kenyans spousal homicides and grievous bodily harm has been perpetrated by fellow Kenyans. One only needs to look at recent stories from Minnesota, New York, Georgia etc. In the general US population white men are more likely to murder spouses than any other race. So spare us the bs of blacks having violence in their DNA.

It's happening here in Kenya too and it's not BA perpetrating the murders.

There's always two sides to every story. May I just remind you that the rights you are enjoying in America were fought for by the same people you have expended lots of energy demonizing. Oh, the irony!

...but Miros have played such a big role in helping the negative image around the would...they are so uncultured.

pole sane for your experiences...
"..no wonder blacks are the last grade of mankind anywhere you go" sorry you think that way about your mom and dad, kids, brothers, sisters, relatives and kin

I do not understand why because politicians are stealing in Kenya then all black people are low grade humans. Or African Americans are a lower grade because an AA woman treated you bad. Its important we educate ourselves what the African Americans have gone through for generations to be able to survive. The luck of trust, anger and violence is a sign of helplessness and hopelessness. If an A.A and I had a job interview today, you can best believe I would get the job. That is the tactic the mzungu uses to divide people and rule. Bottom line is all people not mzungu are left scrabbling for the little resources left and fighting amongst themselves. And yes all people have faults but if you are going to paint all with one brush then they(white pips) have succeeded.

I concur,.."Its important we educate ourselves what the African Americans have gone through for generations to be able to survive."
Unfortunately there is a lot of sterotypes perpetuated by people of color against other people of color.

You just painted white people as ALL bad and out to destroy the African while telling someone not to paint all blacks in the same way.

I'm not sure how the white man is at fault in this case or the case of Africans being poor. The man who carried out this act is fully responsible for his actions and not the mzungu you imply. It is not the wazungu's who have handicapped Kenyans in Africa but African leaders who have enslaved their own people. America is the land of opportunity, I have many friends who moved here with nothing and are now living their dreams as nurses, pharmacists, lvns, and engineers. The opportunity is there, stop blaming the white man.

It’s good to see justice is done albeit after such horrendous act! I’m saddened to say that if this would have happened in Kenyan, justice would have been bought if the guy was white with money. No wonder children predators are molesting kids with bibles in their hands and the government don’t seems to care. And dug dealers are only getting jail time in the US while the same are traffickers are getting a pat in the back in Kenya.

I'm glad my sensible fellow Kenyans have rejected the anti-Black comments of the demon above. We are all African people brought here at different times by the pressures of this white man's world where he has conquered us. Let's not attack one another. Let's build each other up

Don’t be dismissive of the entire community because of the sins of one. Kenyans kill Kenyans and that’s not OK either, were it not for our brothers suffering you would be riding in the back of the bus.

There is something common in all Americans, white or black, that that leaves me amazed and a little bit scary. Americans in general have some animalistic behavior that runs across color, while nyeuthi have serious and elaborate mental health that awaits to snap any moment. Their temper tantrums are incomparable with their white counterparts, who have some kind of self-control. I have had to talk to the management on several occasions not to fire some nyeuthis and rednecks owing to unusual temperaments in my work stations. I know three of them in my work place who have gun shots and stab wounds some cutting through their groins. But am sure if they get fired, they will find their way in our work place and do what they know best: mass shootouts. Nyeuthis, just like rednecks, have a I-dont-give-a-damn mentality, most of whom have been inmates at one point during their lifetime. Its no wonder Kwame Adom, vented his marine life frustration on his innocent family, to the detriment of her relatives, who are now left to pick up the pieces. I know of many Kenyan ladies who have married nyeuthis and rednecks before they actually dig deep into their backgrounds. One redneck I know had to throw out a Kenyan lady's belongings on the streets after she refused to get out, worried about loosing the paperwork deal. All in all, murder is murder and life in prison is not suffice to serve justice to one's daughter, sister, niece, aunt and friend: death through lethal injection migjt give some closure to bereaved family.

Agreed! "Animalistic" attitude would be it, and it is cultural and American by nature not race based. Look at their movies. Very violent in nature and murderous beyond belief.

every one of us is capable of doing harm it needs a second of madness white, yellow, black . we are not discussing which race is worse than the other forgetting the grieving family it is not in our power to know what goes on in the minds of murderers .

Well, @mjuaji just proved he only knows one thing, NOTHING, rumbling nonsense. Jeez. Was it an American that killed the med student in Kenya? Was the stupid governor an American? C’mon man. Quit thinking local.

Sad story. Human beings are capable of committing the most heinous criminal acts. It doesn't matter what color you are. Please stop generalizing. Criminals comes in all shades. We have had genocides committed in all continents through out the history.

Got you MjuAji. Well said. Used to reading your authetic Swahili posts that balances maturity and Ken motley's hot air, that is the kind of people who write s... that one cant comprehend. Give us more but swahili, pliz.

So is it Americans committing all those crimes in Kenya? Mjuaji and Kikuyu Wamjomba both paint with a broad brush with nothing to back up asinine assumptions. Why are so many Kenyan homes behind walls, gates and guards. Why the iron bars on windows in those homes? Most American suburban homes have none of the above. Thankfully, ignorance is not a crime. For the 2 of you ruminate on the following
https://www.nationmaster.com/country-info/compare/Kenya/United-States/C…

I immigrated in USA, went to accelerated nursing program, did some literature on a book called, "JAZZ" by Toni Morrison, she explains the hidden bitterness of slavery... Please excuse the A.A and understand their scenario. Learn about the memory of the deep wells, and the empty "something" in them, says Toni. We immigrate and go over racial discrimination in school...they are too bitter to succumb to the racial white man's stigmatization of the black...yet not all whites are racial, not all black A. are nasty...some have gone over it.