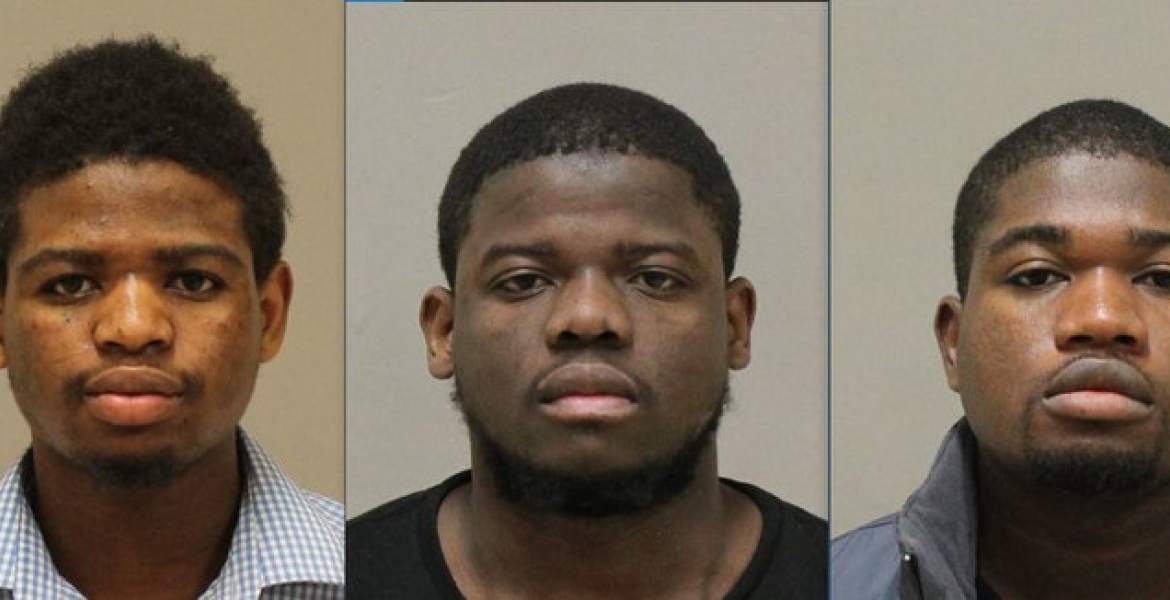 Officers from the Federal Bureau of Investigations (FBI) have arrested three Kenyan-Americans who are suspected to be members of the Islamic State of Iraq and Syria (ISIS) terrorist organization.

The three Kenyan-born men, who are residents of Lansing, Michigan, were arrested on Monday at the Gerald R. Ford Airport in Grand Rapids, Michigan.

The suspects were arraigned in Grand Rapids court on Tuesday where they were charged with conspiring to provide material support to ISIS. If convicted, the accused persons, who are in their 20s, could be imprisoned for 20 years.

The Department of Justice says the three are naturalized United States citizens who immigrated from Kenya.

They are alleged to have recorded videos of themselves pledging allegiance to the terrorist organization and are accused of threatening to kill "non-believers" by mowing them down with a car.

I will not call them sleepy looking low lives or losers but I beg to ask why they would be in the radar in the first place. What a shame! They are tainting the good name of hard working doubles-driven-plots buying Kenyans in the mud!!!

Our brothers the Muslim leaders need to come together and correct what’s wrong with their religion. Which god requires humans to kill innocent women and children for him and yet it’s described as a religion of peace? Poor ,lusfull youth with low self esteem are falling prey to this evil minded Islamists with the promise of virgins in ‘heaven’ when they die in their cowardly acts against their own communities.

You've mentioned the killing of "innocent women and children" only. How about Innocent men?

Too soon to comment. They are suspects not terrorists yet.

Corruption in Kenya's immigration sector put our nation in danger. Many Somali born men and women fraudulently purchased kenya's Birth certificates, IDs and Passports. All they needed to part with was cash.

One just needs to go to Nyayo house passport section band you'll think you are in Mogadishu. The crowd you see there should be representative of the Kenyan population but majority are of Somali origin - young & old ... some older than your grandparents. They first acquire IDs the n passports to enable them to travel abroad.

They let in the Ethiopian and Eritrean Bandits too; well known as the SHIFTAS.

Am so tired of fighting terrorism and fighting anti-terrorists people.

Where are the parents, friends, family of all these people-children or whatever?

Am taking a one year break from anything terrorism.
AM TAYAAAAD!

@ Imara Daima, isitoshe, Mohammed mwenyewe married a 9 year old.And we also know that he loved women.Worse, he raided christians and other non- believers and forced them to become muslims.He even single handedly killed afew.Now tell me why would a loving God tell someone to do such athing?
At least the son of mariam was not violent,or a womenizer,neither did he engage in child marriage,from what we read.
If only people would question .Ayaan Hirsi Ali was a staunch muslim till she did the questioning,and became an theist...I while ago, I watched Ali Mazrui's tripartite heritage programs,and at one point he said that one muslim country was killing pigs,and selling them to survive (could have been algeria -forgotten)But before handling the pig,they would pray to their God for having sunk so low as to hand this filthy for bidden animal,and ask for forgiveness.
Now at that point shouldn't muslims be questioning why God would allow them to sink that low,while infidels around them are thriving?
Or even better, muslim somalis running to kenya for safety,acountry they says is full of infidels.Why cannt they call upon their rich muslim brothers and sisters in Saudi,Barain,Quatar,and others for help,instead of shaming themselves by accepting help from the infidels.Yes question.That's how we find the truth,and That's why we were given brains.The truth shall set you free.

Mimi nataka kujua...hii miafrika jeuri who just adopted Islam, why the need to die for a religion that thinks of Africans as kafirs? Leave Islam to Arabs and Christianity to Mid-Easterns/Europeans. Why do Africans take on burdens that are not theirs? Wapi Ngai, Enkoro, Nyasaye or Gumende amesema uuwe watu?

These guys don’t look Kenyan to me. Hawana kisogo. Looks like those west Africans who buy Kenyan’s passports.

That label of them being identified as “Kenyans” causes a big impact to those Kenyans with good morals.

Quite honestly, this religion I don’t understand it.

This is hurting , stinking to see somebody born in Kenya and fortunate to live in United States as citizen stopping down to a violent religion whose believers take life as nothing to be enjoyed but only to God's soldiers.
There perception of life is very narrow that killing people believers, moderate and other who don't believe as non human therefore their God has recruited them to other human regardless of , This religion should be banned or confined to certain areas like SAUDI their Headquarter and their Black stone MECCA THROWN SOMEWHERE IN THE DEEP SEA.

@ Muchang’ang’a, I agree with you. They don’t look Kenyans. This shows how corrupt Kenya is. They might have bought IDs from kenya. They don’t have any similarity with any Kenyan tribe.

Their names speak for where they are from! Kenyans don't do terrorists stuff!