Miguna Miguna to Blame for His Woes at JKIA, Says Kenya National Commission on Human Rights 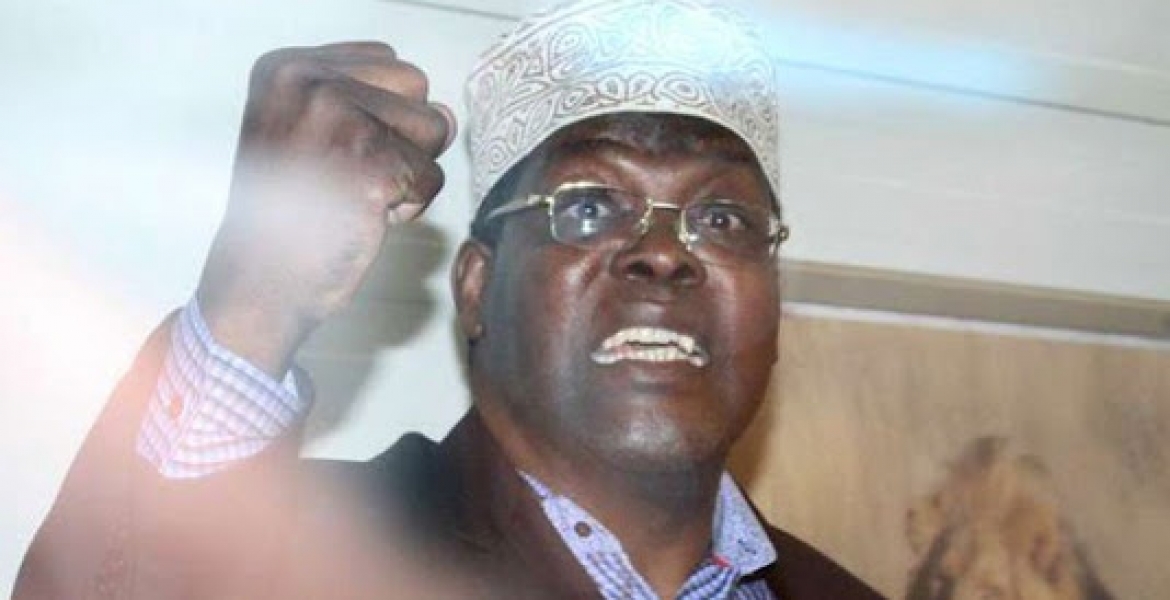 Speaking to the media on Thursday, KNCHR Chairperson Kagwiria Mbogori said that the lawyer declined to provide his passport for clearance at the JKIA.

"The commission was disappointed with Miguna because the court orders had allowed him to use the Canadian papers he had traveled with to gain entry in the country."

"He, however, adamantly refused to use the papers in a situation that boggled us," Mbogori said.

She said that the situation would not have gotten out of hand had Miguna cooperated with the airport officials.

"We tried to salvage the situation hopping that if he produced the papers, he would be granted entry on gratis basis until the hearing of the petition was concluded," she said.

In a statement on Tuesday, the Immigration Department insisted that Miguna lost his Kenyan citizenship after becoming a Canadian naturalized citizen prior to the promulgation of the new constitution and must therefore apply afresh to have his citizenship restored as the law requires.

"To enable Miguna regularise his citizenship status, the department has this morning dispatched the requisite application forms to the JKIA for [him] to fill [them] for processing," the department said on Tuesday.

I agree Miguna Miguna should blame himself. His refusal to comply is what got him where he is today. His advisers are as naive as he is.

Wajinga ndiyo waliuwawa. This fool created all this mess for himself. Thousands and thousands of people showed up in Uhuru Park on Jan 30. They went home safely and are enjoying hot meals with their families as Miguna sleeps in the JKIA toilet. The people's president eat Ugali of $25B and is enjoying himself to the maximum when the fool rots in Dubai.

Aiyaa Mmelipwa ngapi Instead of addressing why GVT had not facilitated his passport as required you wanted him to surrender the Canadian..so that they mess with it too..you have to think and act like a criminal that is what Miguna did he has exposed the daylight impunity in this gvt..,, KNHR hope someone misquoted you.

Paid or not it does not negate the fact that Kenyan ID and passport were illegally acquired by Miguna. They would have only been valid if he had applied to regain his citizenship. Hii ingine ni panganga. He invited scrutiny by engaging in subversive activities including treason. The lawyers shopped for Judge Odunga who made an illegal ruling to pander to a willing audience, you being exhibit A.

Jambo Kenya
I Am Sending This From Toronto Canada And Just Wanted To Say That We Have All Been Following The Turn Of Events On MIguna Miguna. I Am Born, Raised And Went To School In Kenya And Just Moved Here About 15 Years Ago...When I Got My Canadian Passport More Than 12 Years Ago, I Automatically Knew That When I Am Going Back Home, I Will Use My Canadian Pp As A Travel Document And Have Traveled Home Using My Canadian Passport With No Issues Whatsoever. It Is No Brainer That I Am Traveling International And At The Point Of Arrival I Need A Valid Travel Doc. Miguna Is A Lawyer And An Immigration Lawyer N Shud Know Better! Kenyan National ID Is Not A Travel Doc. Miguna Knows ID Here In Canada Is A Drivers License And He Cannot Use It To Travel By Air To USA Unless He Drives Across The Boarder....I Feel Like I Am Wasting Time Saying All These To Orengo, Havi, Soweto And Miguna....Miguna Is A DRAMA QUEEN And Only Seeking Popularity And Sympathy...Ok...Let Him Travel To Canada Using His Canadian ID At Toronto Airport And We Will All See If He Will be let In Or Not....He Knows IATA Will Fine Kenya Millions Of Dollars If They Allow Him In Without A Valid Travel Doc. Even If He Goes Through Uganda Or Tanzania, At The Airport He Will Still Need To Show Immigration His Passport....Then He Can Proceed To Kenya With His Id From Kampala...I Am Not Into Politics And I Dont Hate Miguna But I Hate It When He Behaves Like A Little Kid!
Kenyan In Toronto

@jeri uspoke like 5 maumau gikuyu men.Pewa chai na mandazi nitalipa!Miguna amenjua sasa kenya sio ya mamake!Ebu mtafutie job ya manoki huko Ama ya cna juu I heard he cannot practice as a lawyer anyway.If he want to come back to this beautiful shithole relaxing lessstress majuu to us then anjaze the right documents!Jeri I worked in Alberta for 7months snow bado iko na baridi.

@Jeri, Beautifully said! Encapsulates everything! The so called Kenyan lawyers and judges are just mediocre. Miguna knows it and is milking their ignorance to his benefit. Well said! If I was Matiangi (or his lawyers) I would appeal against the fine imposed by the courts as the orders could not have been enforceable to someone not in the country yet!

Some of you have shit comments. Kenya will forever remain to be a tribal country, where ordinary people and leaders do not adhere to the rule of law, corruption is part of the society. Kenya will never be able to compete with the developed world.

@bronx Kenya has 43 tribes n yes it’s tribal country which to me is not that bad to to leave than leaving in a racist,descrimination western countries where ur seen as an ape,devil,useless,dark skin,stupid,idiot n they call u straight on yr faces as shitholes n yet u do nothing??Please there is no where beta than home?N for those who hates kenya so much please invest on a graveyard ndio hata ukikufa why bother pple bringing yr body to a country u hated yet ur born there.Zikwaa huko hapana sumbua watu na harambee kuleta mwili.

The government of Kenya has Miguna's Kenyan passport.

Yes Guest3, CONFISCATED. Miguna has his CANADIAN RIGHTS. Get the drift? Not hard to figure really, if you place your ill placed emotions aside. @Bronx, Miguna's plight has nothing to do with tribe...he has been globe trotting calling anybody and everybody an idiot. Even insulted the British when he was held up at the airport. He is high on arrogance and the Kenyan media has put him on a pedestal. Jeri has encapsulated everything violated by Miguna that we are all required to abide to.