Kenyans in Maryland, USA Hold Rally in Support of Jubilee, Pray for Peace 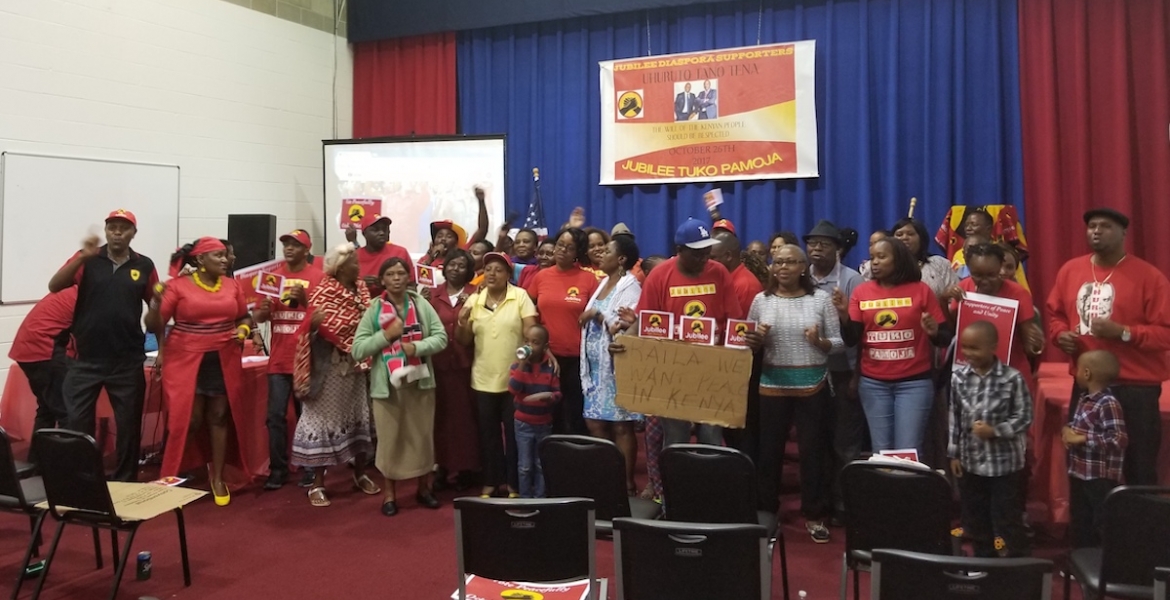 The Kenyan Diaspora residing in Maryland and surrounding states on Saturday, October 14th held a rally in support of the Jubilee Party government.

The event was also billed as a prayer rally for peace in Kenya. Speaker after speaker at the event asked for Kenyans to maintain peace and unity as the country gears to the October 26th repeat presidential election. “This is a prayer meeting first and foremost. It is a prayer for peace,” said Karanja Mwaura, the Master of Ceremony at the event.

Kiguru Kimani, who immigrated to the US 27 years ago, highlighted the various major achievements of the Jubilee government in its first term in office. Among the achievements are the launching of the SGR Madaraka Express which has cut the travel time between Nairobi and Mombasa by train from 12 hours to 4.5 hours, launching a new container terminal at the Port of Mombasa, and the launching of Huduma Centers that have taken government services closer to the mwananchi.

Comfort Mwangi, an educator, urged the National Super Alliance (NASA) coalition to respect the various government institutions and to stop dividing the country. She asked NASA leader Raila Odinga to declare his clear intent on whether he intends to contest in the repeat election, adding that he has publicly announced he will not be contesting the election but has refused to officially withdraw by not signing the statutory Form 24A. Mwangi said the various mixed messages being sent by the coalition, as well as the ongoing demonstrations in various cities have created a state of anxiety in the country that is affecting both the economy and the unity among Kenyans.

Vincent Mongare, an entrepreneur in Baltimore said the Jubilee government has brought a lot of development in his native Nyamira County, and that this was evidenced in the high number of votes President Uhuru Kenyatta and Deputy President William Ruth received in that county in the August 8th elections.

Julie Weche, an educator and proprietor of Elimu Tutoring and Training Center in Baltimore, highlighted the progress that has been made in the education center. She particularly pointed out the increase in the number of public universities  from 4 during her times at Kenyatta University to the 25 current public universities currently and several more private universities. She said this has given a lot more Kenyans across the country access to higher education, coupled with the HELB loans provided to students . She also credited the government in its commitment to provide free education up to the high school level. Additionally, she credited Education Cabinet Secretary Fred for the reforms he has introduced in the education ministry, and in particular taming cheating in national examinations.

Geoffrey Kinyanjui, an entrepreneur and owner of African Flavors and a resident of Lancaster, Pennsylvania, said the Jubilee government has made the country business friendly both locally and internationally. He pointed out at agreements between the Kenyan government under the leadership President Uhuru Kenyatta and the US government that have it easier for Kenyan products to be exported to the United States.

Bishop Robert Lumbasi of the Life Source International Church - Kenya, prayed for peace in the country. Having witnessed first-hand the 2007/2008 post election violence that occurred in the Rift Valley, Bishop Lumbasi said he would not like a such a situation to recur and urged leaders to ask their supporters to remain peaceful. He also encouraged the Diaspora to remain in touch with their motherland and participate in the running of the country in various ways including running for office.

How come Jubilee supporters in diaspora are only Kikuyu's?

We had the Kikuyu Tribe and Other Tribes: Jubilee SUPPORTERS and ESCORTERS respectively.

Guest1, sorry Doreen...ehh, sorry Peter: take time to look at the details, especially the little ones. Many a downfall occur because we gloss over issues in the rush to make our point and don't see the finer/intricate details. Onge? Picking on kyuks all the time will not get you far. Tibim. maybe it might make sense to you if i use it; tibim that is. Tialala. or maybe umelala kazini...

Cha Guava. Vincent Mongare SAID that: "the Jubilee government has brought a lot of development in his native Nyamira County, and that this was evidenced in the high number of votes President Uhuru Kenyatta and Deputy President William Ruto received in that county in the August 8th elections."
The TRUTH: There was Massive RIGGING in Nyamira (and Other Counties All Over Kenya."
ALSO: The "Development that is Being Taunted by Kenyan Baltimorians is NOT Development; it's Huge IDEBTMENT to Donors and MASSIVE Lenders to Kenya (at Massive Expsense to Kenyans and Future Generations).

You have to think outside the box. Kenyans voted, and that's it. Otherwise, continue looking for excuses.

Mongare, Weche, Lumbashi.......I know a few Kiuks who are vocally NASA supporters. Do a little more independent thinking away from Raila and Orengo's warped view of the world!

Nani. How warped? Educate us.

I'm agikuyu but I totally disagree with my fellow gikuyus in Maryland. First, this reporter is biased. This was our gikuyu meeting NOT Kenyans. Next, Raila has done wonders like the new constitution, devolution such that now our county is doing better. What has uhuru done to kenyans? Nothing. The SGR is white elephant project. In the new world who needs diesel engines? Tanzania is building a longer electric railway line at aquarter the cost Uhuru spent in SGR. We are robbing kenyans in broad daylight. Next, in this election, Uhuru is not a legitimate president. He can't sign any bill into law. Next, he can't change electoral laws in the middle of the game. This is what has provoked Kenyans. Next, killing innocent Luos will kill our businesses. Luos are not the Chebukatis who messed up election. Uhuru is surrounded by sycophants who just eat but can not advice him. These include Ruto and Murkomen.

....and you are exhibit A of the reason why Kikuyus are mentally liberated. Try being an Uhuru supporter in Luo Nyanza.

Sorry for the above message, Im so warped up can't think for myself. My head rings Raila all the time. I write nonsense sometimes can't help myself especially when I skip my medications. Im a tribalist, oh god Ngai ndeithia maitho makwa mahinguke.

hahaha........I wonder whether this Njeri Rose Kamau is the one who wrote the previous comment.

'This was our gikuyu meeting NOT Kenyans'. FYI kikuyu are Kenyans

Rose Njeri Kamau. You are the EPITOME of a Delivered of a True and Peace Loving Kenyan. Thengiu. Ngai MWATHANI Akuraathime. Amen!!!

Your prayers and demonstrations will not guarantee a free and fair election.Fake demos so as to see yourselves in the newspaper hata wengine wanna ji promote so and so who owns this and the other kwani hawa wapumbavu wanafikiri raia and by that I mean people not from central province do not own property majuu na Kenya.The time for this tribe to rule Kenya is over there are 43 other tribes in waiting.We are tired of being bridesmaids and this time we will be the bride.Raila tibim!.

For example: Pick a random name like Milli. If I do not want to show support for my party or hold prayers for peace in Kenya for the next elections, I can hide behind "Anonymous" handle and tusi those who have done so. Call them fake and then show bitterness for tyranny of numbers affecting the Kenyan elections. In a democracy, the majority rule. It is sad though. Time for tribalism to end and people to make coalitions based on shared Principles. That can birth a new Kenya. If you say that this time its Tibim's turn, you are asking the other 43 tribes to be bridesmaids too. Think beyond being a pumbavu who does not come from Central province but must announce that you own property majuu na Kenya. Pathetic. Sad.