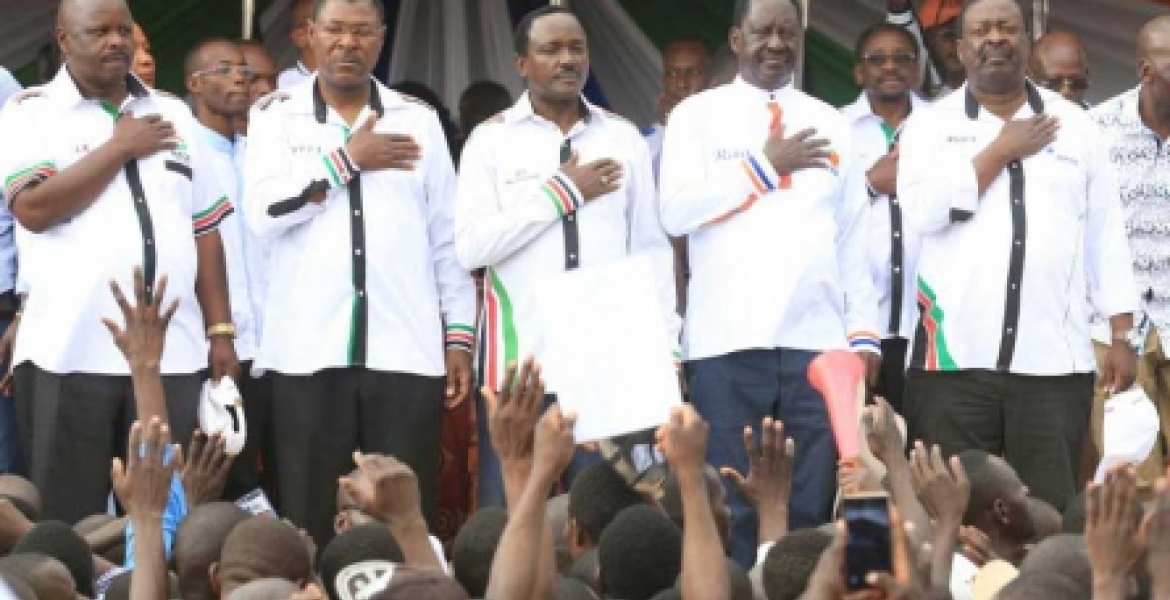 Two people have reportedly vanished with millions of shillings raised by some Kenyans living in the Diaspora for opposition National Super Alliance (NASA).

The cash was allegedly raised by a group of Kenyans residing in Minnesota, USA and was meant to bolster former Prime Minister Raila Odinga’s campaigns as he gives his fourth shot at the Presidency.

The diaspora community through the GoFundMe online platform contributed millions of cash for the opposition coalition, but two individuals trusted to deliver the cash to NASA in Kenya have since disappeared.

The two left US for Kenya last month to deliver the money for Raila Odinga presidential campaigns, but despite Omweri traveling to Kenya to trace them, their whereabouts is still unknown. They did not deliver the money.

“I contacted Orange House (ODM headquarters in Nairobi) to verify whether the party had received our contributions but I was surprised to learn that the money has never reached there,” Omweri said.

One of the men is said to be a one-time parliamentary candidate in Kisii County, while the other hails from Luo-Nyanza.

Omweri said that a diaspora team living in America teamed up and agreed to raise the funds to bolster Raila Odinga and NASA campaigns and help “adopt- a polling-station” plan, a strategy NASA is planning to use in guarding its votes from being ‘stolen’.

“Our intentions were good but it appears others sometimes have sinister motives,” he said.

Not very long ago and I as a NASA WhatsApp forums follower, I (on this Mwakilishi forum) WARNED people against contributing to this GoFundme thing (for Raila). And it's because I sensed Vested CONMAN Interests by the Solicitors. And I rested My Case.

I surely remember reading about that. You were spot on.

How do you give a dog steak in place of a bone? Diaspora must wake up! You get taken by all these fortune hunters from Kenya and you seem to never learn. FEP, University Project,
Kahawa, pyramids, and now political aspirants. And you end up losing your monies. I assume Omweri and company were looking for seats in the NASA government but it ain't gonna happen. The NASA field is quite crowded. Omweri, you need to refund anyone who contributed. Learn and be wise.

It is not that dogs like bones; but it is only that nobody ever gives them steak.

The word 'Diaspora' is such a broad name. Not unless 'diaspora' has a specific name, specific location and registered. Hiyo ingine yote ni matope. You see people write 'We the diaspora...' with no specific name. You are not representing the entire world

About 99% of Diasporans are Users and Conmen/Conwomen. What GOES around COMES around. KARMA.

This Diaspora drama is comprised of individual would be leaders who claim to represent those outside kenya but the truth is they are very local they link up with these "go to meeting phone sites and thump their chests.. the truth is all eaqual to hog manure, belief me I have been to these meetings and I speak from experience.So give your money to these suckers at your own peril... However I still support NASA!

I was a member of these Diaspora Groups that Turned into Once a Month meetings (after which DRINKINGS would follow) that were Pure Hogwash. I quit; and they haven't brought any MAENDELEO to their "Kenyan Community" 5 yrs later.

Hongera ndugu zangu kwa kutapeli wanjinga.Only a mad person can raise money for murderer Raila to sponsor Al Sabaab.And this snake-Omweri should know that not all diaspora Kenyans raised money for those murderers.

OMERA.Your UNEDUCATED arguments as Usual. Do you suffer from Depression? You sound a SAD case all the time.

Haiya-UNEDUCATED.But i stopped your mum from aborting you.She was my std.eight pupil when she accidentally conceived you.

See? Now you're HALLUCINATING and CONFUSING Your Mama with My Mama.

Omweri,you need to do what you were destined to do....slither under the thorny bush, you know like the real Omweri and you just might flush them out

Lots of money can be attempting to anyone. Could have been a good idea to send the money directly to the beneficially

Omera. (Kamau)
Don't make such serious allegations all the time loaded with hate speech.
You were never raised with people so you act and respond to issues with dung from your mouth?
It's sad that you vomit such for reasonable consumers but being a coward you still a name from your uncles place. Take a DNA and your ancestors in Nyalgunga are waiting to cleanse you

Pole sana Ngunjiri for being conned while HARAMBEEING for billionaire murderer Raila.Hata akili huna that you can contribute money for a person who can afford a shs.1.5 billion mausoleum for his expired father,Jaramogi and son,Castro?And the money was to pay arrears to Al Shabaab for Westgate,Mandera 1 & 2,Lamu 1 & 2,Garissa killings.

Kwani Diaspora has never heard of Mpesa. Even the nyanyà's and babu's in mashinani know how to use it. How do you trust an individual with money today .

@OMERA,I totally agree with you - Only a mad person can raise money for murderer,inciter and big cry baby like my uncle Ojinga who supports and sponsors Al Shabaab.And this snake-Omweri should know that not all diaspora Kenyans raised money for those murderers.
In fact,I suspect he may have been involved in the scam and now crying wolf to divert our informed and intelligent attention.
My uncle will NEVER be a resident at the House on the Hill and he will die trying and dreaming.He has to live and suffer long enough and pay the price for the 1982 attempted coup,killings and spilling of innocent Kenyans' blood in the 2007/2008 clashes and all the other myriad of killings caused by his blood thirstiness.

I apologize to everyone. I made this fake news to get back at some diaspora leaders who would not give me space to lead. I was supposed to be the Chairman but they took away from me.
This was not the best way to do it I realize, someone would have been in jail or at least I would have had the courage to mention them.
Again, I take responsibility for the dirty game intended.