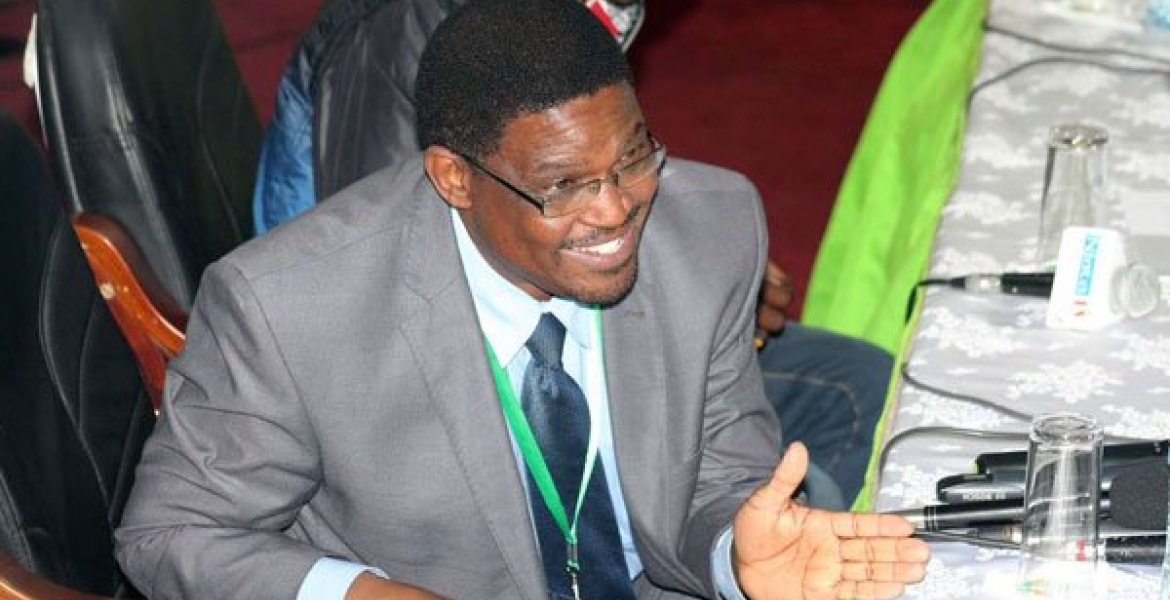 Former US-based Kenyan Presidential candidate Japheth Kaluyu has come out to defend himself against claims by some of his former classmates, who accused him of being an opportunist using his American drawl to cast an image of sophistication and class while his extended family languishes in poverty.

The aspirant said that while some viewed his pursuit for the country’s top seat as a strategic plan to divide voters from the Kamba community, the descriptions misrepresent who he is. He prefers to be referred to as a village boy who circumvented poverty to take himself to the US and is returning to his country to seek the presidency. He said his bid for Presidency is more than his American accent.

“Most people do not know what I am all about. I do not blame them because I have been away for a long time,” says Kaluyu.

Born of a businessman (father) and a teacher (mother) on October 20 1966 in Kakuuni village, Kaluyu worked as a banker to save cash to travel to New Jersey, US in 1993 in pursuit of greener pastures.

While in the US, he enrolled for a Bachelor of Finance and Economics degree at Ramapo College and later pursued a Masters on the same at New Jersey Institute of Technology. He also holds a PhD in Urban Health Policy from University of Medicine and Dentistry of New Jersey.

The desire to become Kenya’s CEO struck him five years ago while on a visit to Kenya, after realizing how the youth suffered from unemployment. He would then assemble 21 student leaders drawn from different universities in Kenya for an address on how to go about unemployment in Kenya three years later.

“The more I talked to them the more they told me that my kind of brain cannot be wasted and that I should be part of leadership here,” he says.

Kaluyu plans to employ ‘Six-point Plan’ to win over voters. This includes investing in the diaspora, cutting taxes and ending corruption

“Kenyans need to start on a clean slate,” he says adding that allegations that his campaign had an impractical approach are false. “I have been campaigning, walking around slums and holding meetings with voters,” he said.

“If I start holding the kind of rallies Uhuru Kenyatta and Raila Odinga are having, I would die,” he continued.

Hehehehe please go back to mayuuu n continue leaving the so called fake American dream.It seems somebody here knows you n has said the way yr parents leaves in poverty??First u have to make sure yr parents leaves a beta life?Hio slaverly English don't work here in Kenya;We have corrupt phd thugs governors who pple thot will change the counties but wapi,kumbe masomo hio mingi doesn't mean that somebody's thinks upright???Its good u dreamt about becoming prezzo which is a good thing but not this time bro??Try mp,mca or woman rep???Watu wamajuu wanakuwanga na chumvi mingi sana.

@Mkenya I think you have a short sighted way of looking things. You seem to have a problem with people who have anything to do with the diaspora . You may just come out clean and say if you were deported from these majuu places you seem to talk about.

You are telling Mr Kaluyu to start small as a MCA. That's how you expose your self. I personally know Mr kaluyu but won't vote for him, however Mr kaluyu is smart. He starts at the top even though he won't get a lot of votes but it makes him known by those he is targeting - the count folks in kitui. When he runs for that MCA or MP , work will be much easier for him. Try to see it Formosa that vantage.

@MKENYA HALISI Mbona machungu mengi namna hii kwa wanadiaspora especially wale waishio Marekani jameni? Your comments always contain a streak of hatred and contempt for the States forgetting that despite all the evils you associate the country with, It's been a huuuu....uuuge blessing to hundreds of thousands of Kenyans, Africans and many Third Worlders out there. Personally, I may not agree with everything in these United States but man, I love the country. Calm down and take it easy man!

Mkenya halisi, I have to say that you appear just a tad negative.....give the brother a chance. We all have to start from somewhere and he clearly has made his way up. What do you have against people in majuu as you call it? Why don't you accept that we may be away, but we still love home. Period. If this guy can try to make it, why not? Personally, I would like to see an overhaul of these leaders who have been around for generations. They are part of the problem in kenya not the solution. So set in their ways... we need fresh ideas.

Hehehehe guyz I love Usa n I leaves there for 8 yrs n I come there atleast yearly to bring my kids there coz they were born there n I can afford 2wks holiday anyway.Trust me I don't hate Usa,actually how can I n yet it gave me a big stepping stone in my life,I worked saved n thank Mwene nyaga for expanding my pocket when I was there??What I don't like about this majuu is the way most Africans have bin brainwashed that it's a beta country than African,Pple in diaspora don't tell pple in Africa the truth problems they go thru wakiwa hii mayuuu.They lie to them they make them leave their good jobs nawakifika hii majuu they regret.This majuu life is for somebody who don't have a good job??So let's b telling our pple the truth.Unaacha job ya lecturer which unalipwa poa then u move n become a truck driver,cna,disability or watchman??Am not saying such jobs r not good but let b advising our pple right n let's not hide what u/we do.I use to tell pple the truth of what I do n what others do??So I don't hate Usa bro thou I returned their pp.

@Mkenya Everybody has a choice to make. Me like you left a teaching job, making KSh 1200.00 a month many years ago. I came to the USA and worked those jobs you talk about. I worked as a security during the night and went to College a during the day. In summer I would double working at night and working at a golf course during the day for almost 100 hours a week. Today, I work as a computer engineer at a Forbes 500 company . Been there for more than 20 years. I have heavily invested in Kenya and in a few years I will join there. I don't have to work if I don't feel for the rest of my life because my residual income from my investments in good enough to keep me and my family. I have not even talked about my retirement income. So Mr Halisi, choose your target wisely. Don't look down on someone in USA because they work at MCdonalds. Working at McD in USA is not equivalent to working at a McD in Kenya and you know it, beside, who made the standard or judge to judge others?

@mailimbili, you can tell from how he (Mhalisi) is fokotharing that he is one of those guys who came to the US, landed himself a CNA job and when he got deported, he landed Kenya a bitter guy....then happened to, maybe, build a few houses and sell and slowly can now afford to drive and have a rugged house of his own... and some land inherited from his parents.....which adds to the self-worth and sense of accomplishment....although still bitter with mayuu coz he sees what his friends and others in diaspora have achieved. His is the lamentations of the black sheep that still aches deep inside...and lets out on his targets in a disguised inferiority complex that comes out as if superiority.

Mkenya halisi, you are full of contradictions. Your initial post, you bashed the poor guy for abandoning his mother, then majuu people add kajumvi in everything. Now you tell us that actually majuu gave you a hike up in the wealth you acquired?! Please.... I remember as a child my mother always told me in kikuyu (forgive my vocabulary): "Wahona humbera nda". Loosely translated, she meant to be grateful of what you have acquired and not forget how you came to be. If you feel people in majuu need inspiration to return, don't bash as you do, but maybe join forces with this guy to uplift the youth whose hopes need to be uplifted and who are more likely to be brainwashed as you claim. For me, I was never brainwashed, I knew what I wanted and still stick to my home base values. To call us brainwashed is an insult. Come on now!

@Mkenya halisi, you have been to stato and you know people do those jobs when going to school or trying to get settled in USA. Why don't you write about those people who have good professional jobs? The central bank governor came from usa, Machakos governor was in USA before Kibaki gave him a job of government spokesman, Uhuru was in usa before Moi called him and gave him a job and the list go on and no

Guyz my point is n will always remain that when we criticize about home let's point the positive things which r happening coz in mingi sana then we comment about negativity.But diasporas pple r again so brainwashed all they do is comment negatively all the time.All that u see in this wazungu countries mtaziacha huko n remember u pay higher taxes working yr asses off to build this stuff e.g roads,railway tracks n so on.Am not pressuring anybody to come home juu it's yr life but Kenya has changed for better n more more opportunities keep coming up as long as ur using yr brains well.Life quality is better here than Hii mayuu if u have something small here to do!Always remember rich,comfortable Kenyans walk Hii Kenya sip mayuu where pple worry all the time if they gonna loose their jobs coz u gat to pay many bills zenye haziishi.So work smart,don't b cheated by diaspora retirement age limit @75yr Juu hata ukiretire na Hii miaka how long ru going to enjoy the saved money???Work smart retire early by 50 if u can n enjoy yr remaining life with less stressful life thou sip hapa majuu.Even if ur employed in big companies u still have to pay those bills n mortgagesfor a long time.Karibuni nyumbani where there is less stress ukiwa umenjipanga.

@Mkenya halisi, talk about yourself because that is the only person you know. People have good jobs and have invested well. People do not talk or parade what they have. If you get to know what most majuu people have you will faint. What you boast of might be 2% of what a security, driver or CNA might have. Just as somebody said earlier if you have a big stomach cover it. It might be full of uji or minyoo tupu