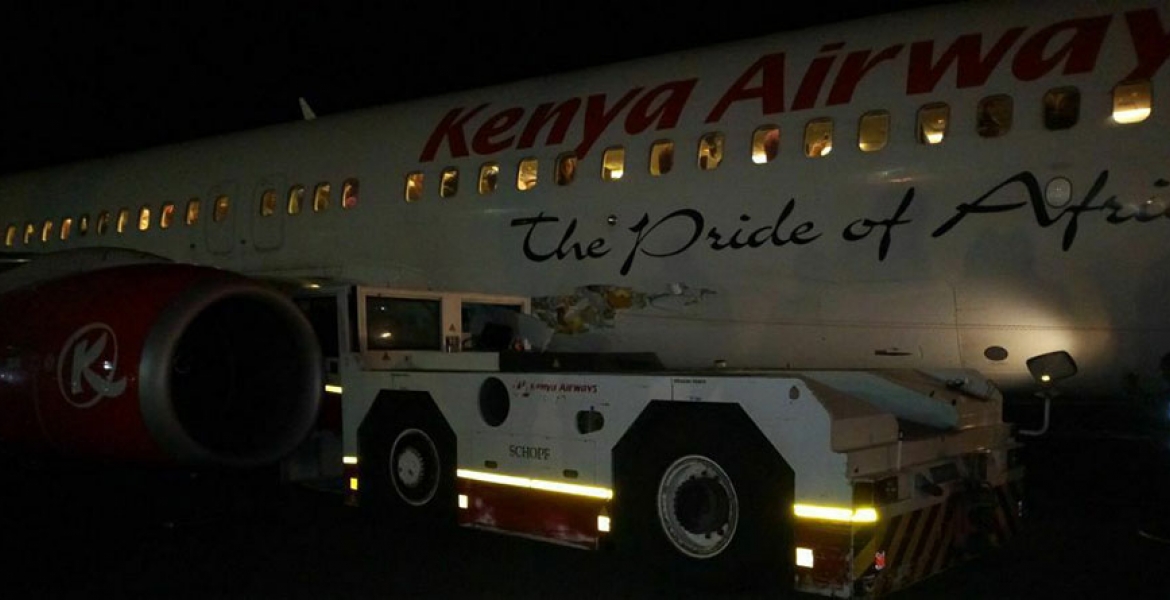 Kenya Airways was on Sunday night forced to ground one of its aircraft and book the Johannesburg-bound passengers on other flights following an extensive damage on it prior to take-off.

In a statement, the airline said that its eight Boeing 737-800 aircraft suffered extensive damage to its main body (fuselage and engine) when a tow truck dragging the plane from the terminal bay to the runway rammed it.

This accident occurred at 8:50pm when the flight, which is the last of the three daily Kenya Airways flights to Johannesburg was scheduled, forcing Kenya Airways to cancel the trip and rebook passengers.

“Kenya Airways confirms that one of its aircraft was involved in an unfortunate incident Sunday evening,” the airline said in a statement. “There were no injuries. Flight KQ764 was later cancelled to allow for further investigations and all guests were accommodated on other flights.”

Experts said that the accident will likely cost the airline’s insurers a tidy amount of money, especially the engine, one of the most costly single parts on an aircraft.

Kenya Airways next generation Boeing 737-800 plane is run on an engine manufactured by Ohio-based CFM International and costs about $10 million (Sh1 billion).

So it's issured so it will b fixed.Not a big deal but wait n hear the diasporians commenting negative about it.Thank mwene nyaga it was in the air???Issurance ilipe that's why we insure??

@Mkenya you keep lowering your value every time you post. Do you take time to think b4 you write? No diasporian wrote anything about this issue. You were the first to comment....as usual.You should change your name to Mjua Yote! Who is we? What you need is a cure for the phobia you have for anything diasporian. Was the deportation that bad?

Yep! This jamaa must have been deported because he sounds miserable with mauchungu mob every time he yaps about people doing madoubles and how he supports trump. He wants people returned home ndio tufanane.. angry and bitter. For most of us hatukufukuzwa jamhuri and Kenya isn't going anywhere.It was a personal choice to go to the US. We can't all be farmers or whatever you claim to be. I don't recall anybody on mwakilishi knocking his hustle.
@ mkenya halisi.. Fuda wewe!!

Mtalii when the kitchen get too hot for yoo please get out?Am writing that coz that's the best the diasporas in USA knows best!!Talking shit negative all the time about their country n yet they r slaves in this usa diaspora languishing with doubles left n right buying houses which they don't sleep on.Please all am asking is be positive when there is something good happening n be negative too but when u see pple who r always commenting negative that's shows how behind our black brains are!!