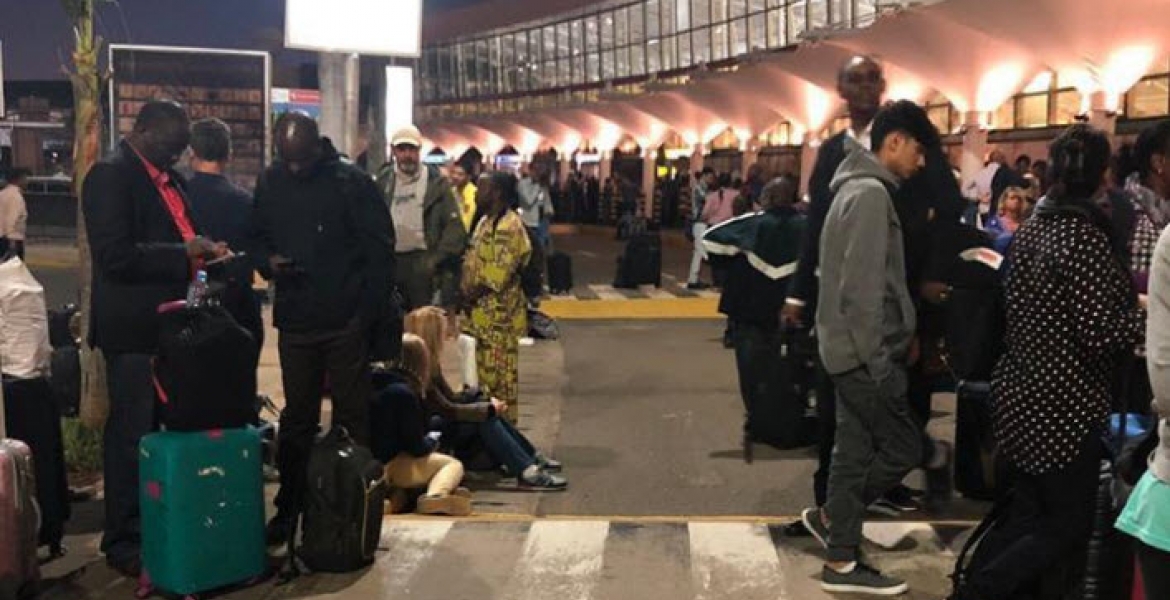 Thousands of travelers who had booked tickets to various local and international destinations remained stranded for several hours at the airport.

KQ saw at least 24 of its main flights affected and struggled to fly out hundreds of passengers who were still stranded at the airport on Wednesday night.

The airport staffers are protesting the planned takeover of JKIA operations by loss-making Kenya Airways.

The union argues that the payments are a sign that the management of the national carrier is averse to financial prudence, hence incapable of managing JKIA.

“These people are here to loot. Why duplicate services that are already being offered by Kenyans,” said Ndiema.

Currently, JKIA which is the country's main airport handles about 13,000 passengers and 230 flights daily.

"Cancelled and rescheduled flights come with costs including refunds and hosting passengers, not just here but in other airports whose flights were to terminate in Nairobi. This will cause an untold financial burden to airlines,” Transport Cabinet Secretary James Macharia told the Daily Nation.

Normal operations have since resumed at the aerodrome following the deployment of military officers from the Kenya Air Force to assist in various duties done by the striking employees.

That is what happened when you make foolish decision. KQ has mastered in loss making. A loss making company cannot take over JKIA.

Uhuru wake up..how are this major decisions made without carrying out effects plan A B and C a few people are here to loot all Kenya public resources so as they can be rich forever...who is in charge of Kenya as a country hii sarakasi ni mob..education new system rolled and cancelled after a few days...matatus are banned from CBD and a few days cancelled now a major one someone wants to enrich himself by privatizing JKIA...Kenyans wake up they are testing people reactions...nurses and doctors strike they are threatened and new ones hired??? NKT. RAO how much did they buy to silence you

When a country is led by a person without a single positive accomplishment of their own then this kind of stupid failures are routine. The boy in statehouse is in way over his head. Tusker tu! Bure kabisa.

Stage being set for "privatization." A perfect storm.

Just asking.. how much profit do they make per day when there's no strike given that they made a 300m loss as a result of the strike? Hiyo mahesabu haiingiani!