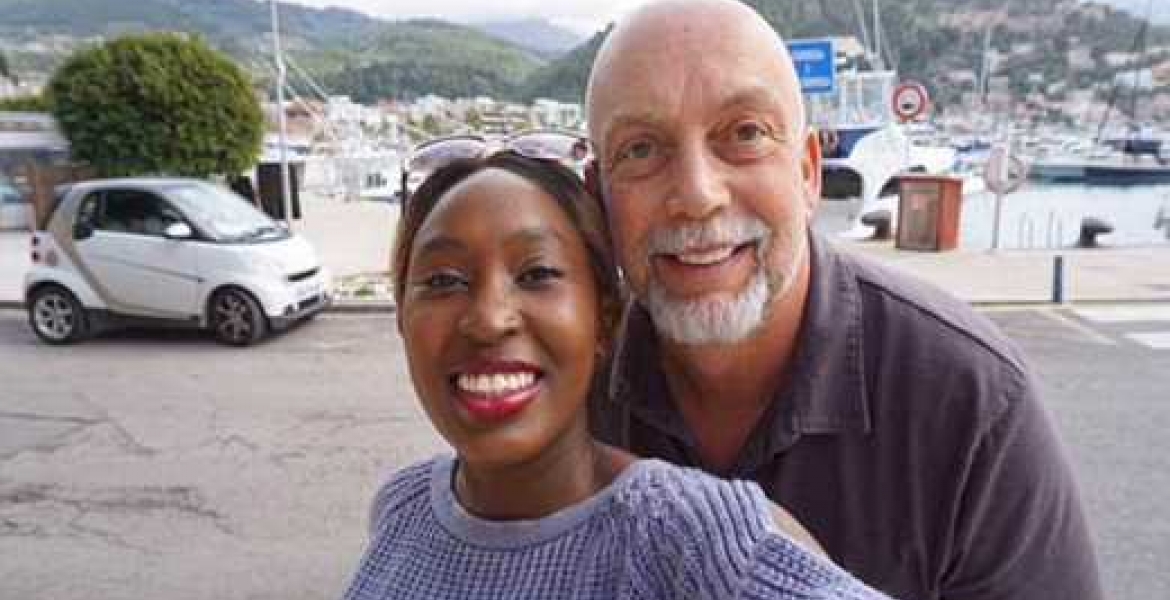 A Kenyan student in the United States is ready to marry her 54-year-old American lover after a year of dating.

In an interview with Mail Online, 21-year-old Rahab Kimani said she met Joe Singiser a year ago while working at a nursing home in New Jersey. Rahab, a student and a home health aide, however, says that her friends got disgusted by her choice of partner due to the age difference between them.

“I thought he was very attractive and immediately wanted him,” she revealed. “I really liked his big muscles and that everyone at work was afraid of him.”

She also says that her family was not impressed after learning the age gap between them, but she says that she feels comfortable with him.

“I just see him as my boyfriend and my best friend. If anything, the difference is that I take this relationship as more serious than previous ones. It took everyone a long time, but they are finally understanding of us being together.” She said.

Singiser, who is Rahab’s supervisor at work is a father of four and says that he fell in love with her at first sight upon noticing her beautiful smile from across the room.

“We get looks while in public all the time,” Rahab said. “Someone even came up to me once and said I should be ashamed of myself because I just want his money. I did get sensitive, but I just walked away.”

She said they live in the same house and are now planning to get married and have children together.

Am checking the Sex offenders database

This seems to be a Girl looking for Fatherly man (Father figure) she Never had.

@Karinga. Wewe umeongea. Remember also wambui otieno and the way Kenyans got all twisted when she married a much younger Mbugua. The heart wants what the heart wants. Kwani Kenyans want to be consulted before someone chooses a mate. This is a matter of personal choice and its no one business. Ms Kimani, if you are happy, TOSHA. I wish you a fulfilling and loving life. Wachana na watu. Wataongea. Watachoka.

The 54 yr old Guy is Cooked I am telling you.

Young lady you are 21 years old you know what is good for you. I think he will be just right right for you. Go a head and get married and have them babies right now. And let people look at you both. They just want someone to love them. Sending Blessing to you both.

Kwani what is the problem. You fall in love with whoever you please. King Mswatis and other Kings in Africa marry 14 yr olds. Go Rahab, marry him if you are in love. There are those who marry their age mates and tear day and night. It is your life. If he is rich, the better, so you can stop working for a minute and concentrate on your studies. NB: people will always talk whether you marry him, marry a 21 yr old, marry a poor or rich man. Wataongea tu.

Step 2 = you have to be psychologically prepared because you do not know what you are getting yourself into.

Kenya. I agree with you. You could be 100% right; Fatherly love.

Please let the girl choose a boy who is good rather being a widower earlier.

Strongly disagree! Emy Kosgei the singer married the Nigerian old tycoon and she came from a very functional and wealthy family. Rev Koskei is the father and is very popular more so in RV. Let's quit being judgmental and let people exercise their rights and judgment. It's her live. Those of you in relations with "age appropriate" spouses, are your relationships perfect? Are you guaranteed you gonna die old holding hands together? Anything can happen and we should thank God everyday and enjoy life.

This is called bed wenching. If anything,you should only have makaratasi kwa akili. This old racist Whittier men have been known to do very bad things to their fetishized black women. Makaratasi alafu mlango.

Not all light-brown are racists.Ndakika hii i am heading to US/Canadian border,50 miles north of Detroit MI transporting two 200 lbs.electronic machines worthy more than $900000 all the way from Los Angeles.I wonder whether any racist can entrust a person he hates to run such an errand for him/her?

They control your wages and can fire you in their own discretion.

Even kina Kirubi & Co sexually mis-use your body leave as they like leave alone wages in companies started with taxpayers money.

You always work at the employer's discretion,whether it's your father's company or private/govt one.Or can you tell me where to get an employer who will be under me,i.e,obeying my orders?

Go girl. Get the papers. Don’t know if the marriage will last two years, but if you get a baby, you will get enough child support money to take care of your manicure, pedicure, underwear, and feed baby on Uji only. That’s my experience with cheap women

Talk about counting the chicks before they are hatched. His kitu nikama hesabu ya polynomial equations. You can plug in a parameter into this relation and the answer is? Variable

The old adage that the affairs of two people sharing a blanket are difficult to decipher, rings quite true in this case. Let people be....consenting adults.

There is no love there my friend. That girl is looking for papers and financial help from the guy. You can’t love a man 33 years older than you. First of all he will really control her and treat her like a little girl or one of his own daughters. He is definitely not sexually active either. Erectile dysfunction has already kicked in. Very common syndrome in white men.

Ha ha ha atia atia? But you are right, wherever one finds happiness, life its damn too short , go for it!

I have got one question for you, the author of this, and the many people who’ve made negative and shaming comments here:

If it had been a 13-year-old girl married off forcefully to a 60-year-old African man, would this have made the news?

Stop being hypocritical and let people who are over the age of 18 to make their own decisions on matters of the heart, which don’t in any way interfere with anyone’s life.

Mzungu says that he fell in love"at first sight". Is it really love,or lust for a firm youthful body? I wish there was a "abarometer" to measure love.What people call love I have come to understand it as"trade off".
This is what the girl gets:
The girl love his big muscles= protection
Most people fear him. = intimidating to rivals
Supervisor = Financial comfort.
Change of status = makaratasi
This is what the Mzee get:
Firm sexy young thing
Envy from young studs
Insecurity(later) when young lions smell pheromones.
Hey if they are happy with the union,lets bless them.This is not the first and the last time you will see this kind of seemingly uneven "coupling".As far I know,adults can marry at any age .And choose whomever they want. Even in arranged marriages,one is not forced to live with the partner they are paired with.
What I would like to know is,did the fellow being a mzungu play a big roll in the choosing? Just curious.And if it did, I am sure the lady would not be forth right knowing the backlash that would follow.

Ati firm body , wewe wacha, have you seen Jlo, Janet jackson and many other over 40s with bodies to die for. You live in FL and I'm sure you have seen over 40 sexy women on those beaches and can floor this young woman and with money to boot. That analysis is old fashion kidogo. The Mzungu amekataliwa huku majuu ( even I would not touch that ha haha) and went to poach the poor African girl, who is in it for money perhaps, society admiration as when African chics see this - a mzungu they salivate big time lol , admire and imagine all sorts of romantic gestures being offered by this muzungu.We are the only ones here giving her backlash, I bet in nbo she revered and bowed upon when arm in arm with that Mzungu at Sarova, Pana Africa, ol sereni etc . I bet her family are so glad she is with a mzungu with a lot of money (if he really does) - I just hope when she comes back she will not be thrown in some burbs' in ArkansaS or some place and no beverly hills type of living . Either way wish the young woman well

@formerly guest2.What are the chances this mzungu would land Ill in his arms?Idont know him,but hanging around foreign student working in a nursing home won't cut it.He does not have much for Jlo or the likes to trade with.Talk of imbalance of trade

J Lo, Janet Jackson have done plastic surgery. They have the money to do all sorts of stuff to stay young including hiring personal trainers. First of all JLO has done a lot of plastic surgery from her butt, to boobs, to everything.

Yes.ihave seen plenty of 40s and 50s who would run circles around many 20 and nineteen year olds.However,this is a case by case situation.This fellow here likes her youthfulness,which generally entails firmness.Thats all.By the way Halle Berry looks pretty good at 51...ithink,and not because she is mixed.

Hehehehe yes she is over 18 n that’s makes her an adult n 1000000 times sure hii ni mapapers bana big time.But I would like to pose the same questions to the commenters who r statingbits ok.If ur sister n that age brought an old guy would u support it???If it was yr bratha who is 18 n brot an old women that old would u say hallelujah.To me she is an adult n I won’t support it.

Good luck to them. It's a win win situation. For her: mapaper. For him: Well, she's already experienced working in a Nursing home so he won't have to shop around when the time comes! Lakini he looks older than 54 and if he is...boy, has he lived!

It doesn't matter whom you choose/marry, people will find something negative to say and ruin it for you. I wish to find her courage soon.

While I have no hard feelings for this, my advice is that the age difference might be disturbing to either both of one of them. The girl is in the morning, while the guy is in the evening so the energy levels are different and this is the time unfaithfulness Knocks.mbugua didn't love wambui He found help in wambui so he was bound to do anything to keep her. However if your love is real then good luck because all marriages have challenges.

Please sister if you are looking for makaratasi come I give you for free iam not interested anything back from u but to remove you shame.

Altogether love is blind and strong than death. Whoever says one is morning and the other is night!, the evening will all balance to mid day as they are all dwelling in true love. Happy wedding and a happy life guys.