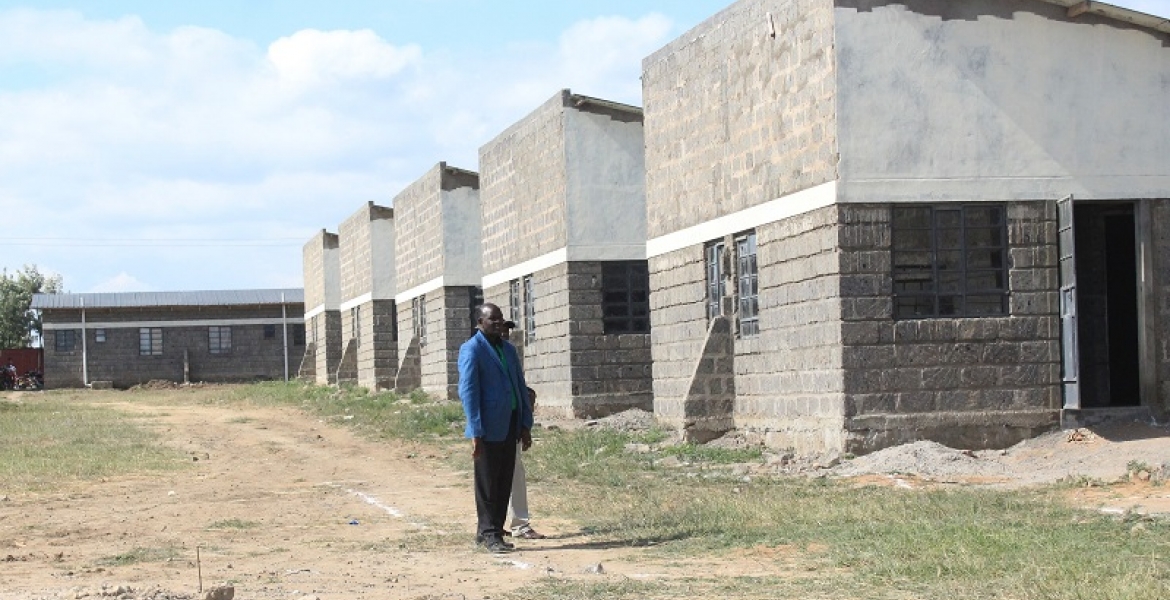 A group of Kenyan boda boda operators are putting up an ambitious Sh95 million housing project from Sh50 daily savings.

Members of the Nanyuki Bodaboda Saving and Credit Society (NABOSA) are building the houses at Sweetwaters area on the outskirts of Nanyuki town.

NABOSA chairman Patrick Waithaka tells Daily Nation's Mwangi Ndirangu that the group started in 2009 when motorbike riders from Nanyuki formed a chama dubbed the Nanyuki Motorcycle Umbrella Body (NAMUBO) under the patronage of Bishop Simon Ndegwa of the Word of Faith Church.

Initially, the formation of the group was inspired by the need to address frequent  harassment by traffic police, theft of motorcycles and murder of cyclists.

“We met and formed NAMUBO to address these problems affecting the business, bailing out of our members in court cases and buying spare parts for our motorcycles,” Waithaka notes.

The dream of owning houses was conceived in 2014 after learning that a bodaboda Sacco in Kitengala was doing a similar project.

“We approached the former county government under the leadership of governor Joshua Irungu, and it financed a trip to Kitengela for bench marking,” says Mr Waithaka. “We were fired up on the housing venture and on our way back we sought financial insights on savings from Kenol United Bodaboda Sacco whose model was doing well.”

After this, members agreed to start saving Sh50 per day or Sh350 weekly to jump-start the project. Sh300 went to the project while Sh50 catered for administrative costs.

“We also approached National Cooperative Housing Union (NACHU) Ltd, who have been financing the project and they promised to inject 80% of the total cost, while members contribute 20% including purchase of the land,” Waithaka tells Daily Nation.

The Sacco first identified a six-acre land at Sweet-waters, purchased it and began constructing 60 housing units, 50 being bedsitters each valued at Sh700, 000 and 10 one-bed roomed houses each at Sh950, 000.

“Most of the members in NABOSA could not have imagined owning their own residential houses. It’s a dream come true,” Waithaka says.

George Macharia Gichimo, the NABOSA Housing vice chair says: “Now I am anticipating to leave my rental house and occupy my new house in August when we are expecting the project to be completed."

Heko kwao! Proud of them!

Wow wow Kograts after owning yr own hse in that shortest time u will no longer be a slave comparing with many who r held enslaved by mortgages around the world.This shows how far u can go as a group than going solo.Watu Wa Diaspora majuu mnaona kenya yetu inaendelea Sawa Sawa to those who r willing to work hard with determinations.This Guys didn’t use degrees or masters,to come up with such a projects.They used their brains n focused?Kograts Bodaboda pples.We visited women in Murang’a too who had come together n they have build big estate around Murang’a town n the educated woman alifika class 5 n they r worth 260million ksh after selling sokos they came together.Such stories keeps me going in this beautiful kenya of ours.

You really didn't the story. Did you. In your rush to stupidly attack the Kenyan Diaspora which is totally irrelevant, you forgot to note the project is financed by a BANK. Hiyo inaitwa mortgage.

Heads Up: NABOSA's contrubution to the Project is 20% of 195 million Shillings. This 20% translates to 39 Million; and 156 Million from it's Lender. If they Ever DEFAULT on Paying back this 156 Million: the Goose is Cooked and the Houses REPOSSESSED/foreclosed. Finers crossed.

@Guest where r u getting 195m.I thot it’s 20% of 95m which is 19m unless am confused like u dude.19m is equivalent to about 190,000$ which is about a townhouse in Philadelphia In a shoddy stinky neighbourhood.Trust me this dude will easily raise 19m to the lender not 156m but am happy to b collected.U didn’t even kogratulate the Bodaboda folks @guest1

Actually I ment they owe the lender about 75m ksh juu wametoa 20% Which is 19.Soory for that calculation.But hii 76m watapata bana.