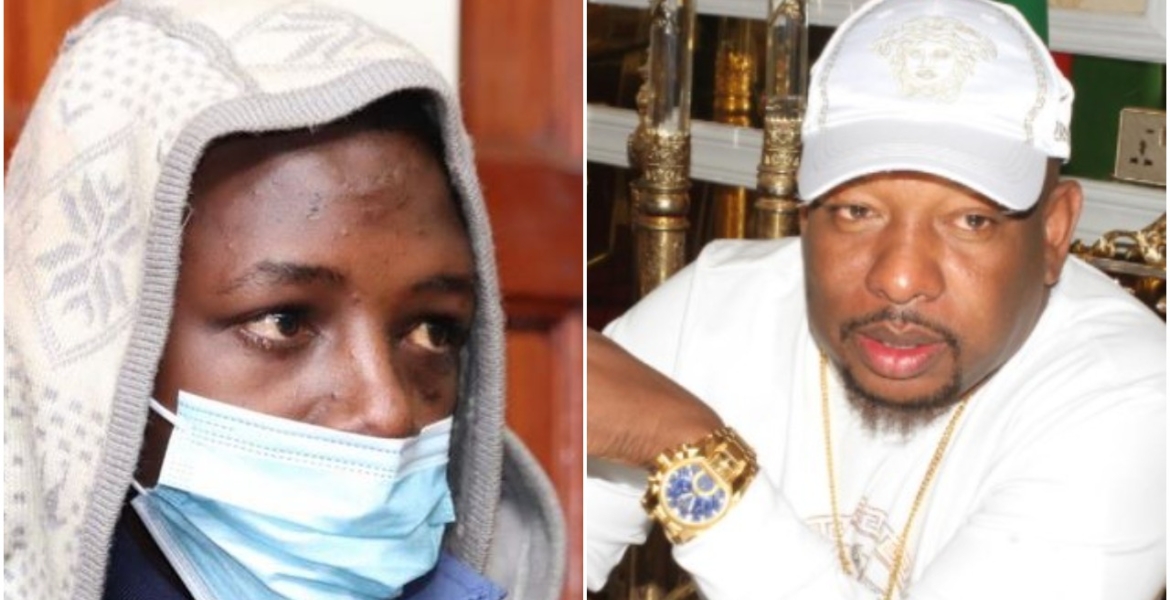 Alvin Linus Chivondo, the man who was jailed for shoplifting food items in a supermarket has been set free.

Chivondo was released from custody on Thursday after former Nairobi Governor Mike Sonko paid a Sh100,000 fine slapped on him by the court. Sonko also promised Chivondo a monthly stock of food in addition to a job.

The 21-year-old man was sentenced to a year in prison or pay a fine of Sh100,000 after he pleaded guilty to stealing 5 litres of cooking oil, 5kgs of rice, ½kg of honey, ½kg of tea leaves, and 2kg of sugar worth Sh3,165 from Naivas Supermarket located at Development House, Moi Avenue in Nairobi.

The court heard that the accused posed as a customer before picking the items from the shelves and packing them into a non-woven carrier bag.

Chivondo was intercepted while attempting to exit the supermarket without paying for the goods.

On Wednesday, ODM leader Raila Odinga demanded an unconditional release of the man, saying he was only trying to put food on his family’s table.

Odinga, who is the Azimio-One Kenya coalition presidential flagbearer, urged the justice system to go after serious criminals who are roaming in the country freely.

“Let Alvin Linus Chivondo be released unconditionally! Criminals are now getting a reprieve to campaign freely, while petty offenders are being jailed. Let the courts get their priorities right, for once, you can’t jail a man for trying to feed his family,” Odinga said.

While pleading for forgiveness, Chivondo told the court that he lost his source of income, adding that his family, including a four-month-old child, slept hungry for three days.

Those who are going along with what Sonko and Raila are dong, are applying situational ethics at the wrong time. It's all intended to garner political mileage.We cannot replace the law by ethics... or religious principles.There are many women who prostitute just to put food on the table for their children,and some are hauled to jail for that. I dont see that being any different.
If these two politicians are sincerely,they should call for releasing of all petty thieves who were caught under similar conditions as those that led Chivondo to steal. Let them apply the "doctrine" evenly,and fairly.What do they propose doing for those who will come forth with heart wrenching stories that would make chivondo's look like a child's play?
Politicians should stop taking advantage of stories that would put them in headlines,or breaking news slots for self aggrandizement. The good books says," when you give to the needy do not let your left hand know what your right hand is doing, so that you giving may be in secret..."
And yes, I never denied that the good book has some words of wisdom,and excellent ethical and moral directives to live by.-Just in case some smart-aleck says."hey Maxiley,I thought you were a kaffir..."

Ndugu Maxiley, you seem to forget a few things, 1) all politicians are attention whores and will use any excuse or incident to get attention.
2) laws in Kenya and many countries are applied unequally based on money, power and influence. In Kenya, the rich can even get away with rape, assault and murder.
Does the crime the young man allegedly committed justify a fine more than 30x greater than the value of the property he is alleged to have taken on top of jail time? In addition, if he is already broke, where and how will he come up with the cash to pay this fine while in jail? Wouldn't it make more sense to garnish his wages once he got a job and wouldn't it make more sense for Sonko to hire the young man and pay him rather than just bail him out. Naivas gets paid, the young man gets a job, learns skills and gets paid, Sonko gets a loyal butt kisser and burnishes his image. Win, win, win.

So, what are we saying, Bw. Raila? What message are we sending? Ndo Mimi naogopanga huyu mjamaa...most of his supporters get this message loud and clear..... Not good!!

Guy is broke how is he bailing someone out