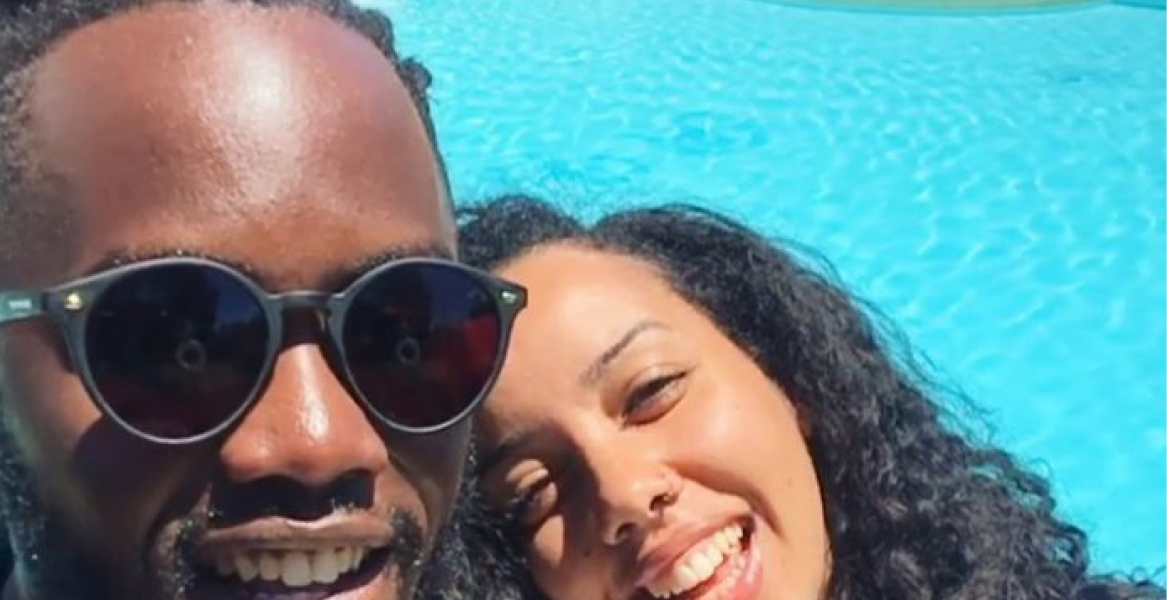 Junior proposed to Ms. Wahoro during a private engagement party attended by close friends and family on Saturday.

Among those who attended the party are Karen ‘Kaz’ Lucas and Deejay Kace. Karen shared photos of the party on social media.

The two are said to have purchased the engagement ring at the same jewelry shop that made the famous ring that was used in the Lord of The Rings Blockbuster trilogy as they are huge fans of the best-selling book.

During the engagement party, Junior wore a blue and white floral skirt. 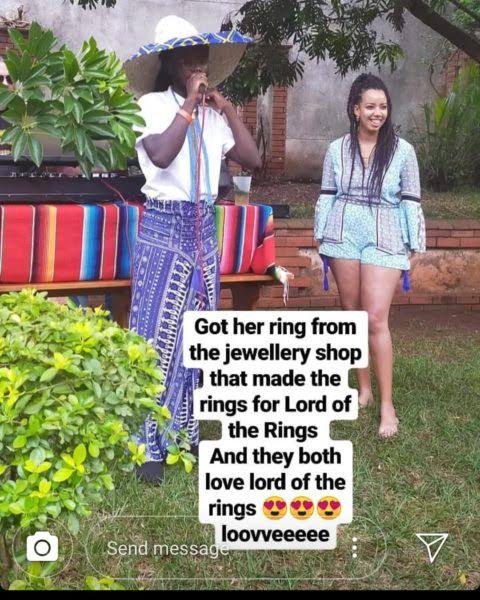 Junior was on several occasions in the past photographed wearing female attire including thongs and dresses, sparking rumors that he is gay.

In May, Junior responded to an online user who claimed that he is gay.  In a tweet, a user identified as @jamrick_m alleged that both Junior and his sister Lupita are gays.

Responding to the user, Junior noted: “You didn’t even have the COURAGE to @ me. At least I live my life with the self-love and confidence you’d only dream about. Simply hate to see it.”

This prompted another user, @jackrobinz to ask Junior to set the record straight about his sexual orientation.

“Okay..so @JuniorNyongo just to put things clear for me with no intention of offending you..are you gay? A cross-dresser? transexual? Semenya-like? or just a man fascinated by female wear?” posed @jackrobinz.

In his response, Junior refused to give a definite answer and simply said: “I’m a proud Luopean.”

Iam always attacked when I point out that dark skinned people,particularly men for some reason go for light skinned women.I just report what I observe.Look at the picture,and tell me its not true. Those who make this choice will not of course agree with me,but trust me Skin color plays aroll in their selection.
Unfortunately as advanced,and objective as we may pretend to be, we still discriminate based on skin color. What is so unfortunate is black people doing it to other blacks...
Lupita her self has openly stated that growing up she was ashamed of her dark skin hue,and it wont be stretching to see the brother with the same mentality.
To make matters worse, even Christians,and Muslims who claim that the creator made all skins beautiful fall for skin lighteners,that are dangerous. Would it not be wise to just love the way one was created?

Lol But that is what beauty is. The lighter the better, otherwise how will a negro show he has arrived, the optics are all is required to have the natives bow to the enlightened negro. In his defense, the "light" skinned chics have learnt the darker negro man weakness and therefore do not need to gain any other skill but just use her "lightness" to lure him to her and she can live happily ever after. Majority of successful black men in US and world over cannot be caught dead with a melanin in case the upper society mistake him for the "help". He must get a wife who is close to his master complexion to be allowed in the main house, "django unchained " :-):-).

Maxiley lakini wewe, si ulikuwa na mehican lady - kwani it not her "olive " skin that drew you to her :-)

@ Formerly guest2.Yes I had a mexicano,but I would not call her light skinned.She was I guess brown skinned .
I just saw some article that one of the Kenyan socialite has been spending quite aforture on skin lighteners.I believe her name is Achieng. Well,Ithink she should be a sales lady for one of these companies that produce these products,and get free samples...
Hahaha,... the darker negro man's weakness is desire for light skinned women.That's funny. You made my day.

A negro ain't a Negro and arrived until he "busts nutt."

No wonder women bleach because they feel being dark skin is ugly. And it's true all these famous black men will marry wazungu and yellow yellows. To the dark skin ladies left behind like me, I ain't feeling sorry for my skin coz my skin 100% healthy inashine spotless kabsaaa

Oh I do not feel left out at all. My man is a very secure proud African Mandingo Kenyan black MAN who is proud of this Melanin kinky hair African woman and our kinky haired children who are doing very well ahead of fair skinned ones..hell I would never want anything different!

True. It's just as much as some Tall men like short women and Skinny men like Fat women. And even some More educated men like less educated women or vise versa.

Not all of us are alike. If he do like men what dark woman would allow that. I'm a brown skinned brother who is attracted to brown or dark women.That because they identify with my experience and struggles as a black man. Then some feel when I was down and out dark women didn't do a thing for me but look down upon me and nag me. Im getting a light skin or white women but by they always return to dark women.

people should ask wanja if he is gay

Wanja knows he is not gay. The rest of you mind your own.

@Nonyabusi; how sure? Maybe he is double-dipping!???

Guys you realize that the color of a woman don’t define what she becomes in the mans world. Reality is wanawake wote or most of them over 90% are just some sort of headache to men. Hence if we go back to square one, you would rather be stuck with a beautiful looking problem than an ugly looking problem... hence the tendency to hang on white chics...! Going dark doesn’t guarantee a man any better success si he might make himself happy while at it

Hello yall contributors.... These topic is fired up I agree..

I am neither blackskin/Yellow yellow or bleached skin

So who am I

While you all chat of the above... I want to bring attention to the hair.....

Sasa my sisters from another mother.......

Hii to me imekua worse than skin lightening products +bleaching=skin change....... Now when you lighten u then get pregnant what's the end result ya mtoto.... Brown skin, cancer infested crying nm any with kinky.... Hizi DNA/mitochondria Hai change honey

Back to hair........ Waaaa. Sisters plse...... Do you know wangu Wa makeli didn't have no long hair, no weave/wig..... She only wore hangi (earrings) my twa Twa Twa collected me. Coz we are everywhere twaaaa twa

Sasa why wear this tails on your head? It takes all your beauty away sister.... Please stop 🛑

Wear a shot hair. Just don't stress... Come Tha k me later honey after u take b4 after pics

Anyways let me thin on my own problems

And junior nyongo by the way could have Alot of maasai blood in his body and wanting his mjulubeng to get longer than be suffocated by those undies and men trouser...

If u don't know his truth just take couple steps back brother....

Do we have issues with our morans..... I see ya men go maasai maracas just dress 👗 up and take pucs🙄

These life is a circular ball ⚽ has no start or end... Munless u are investing one 🙄🏐🏀💪🤔

Anyways Christmas mood is on fire.... So let us Rollam