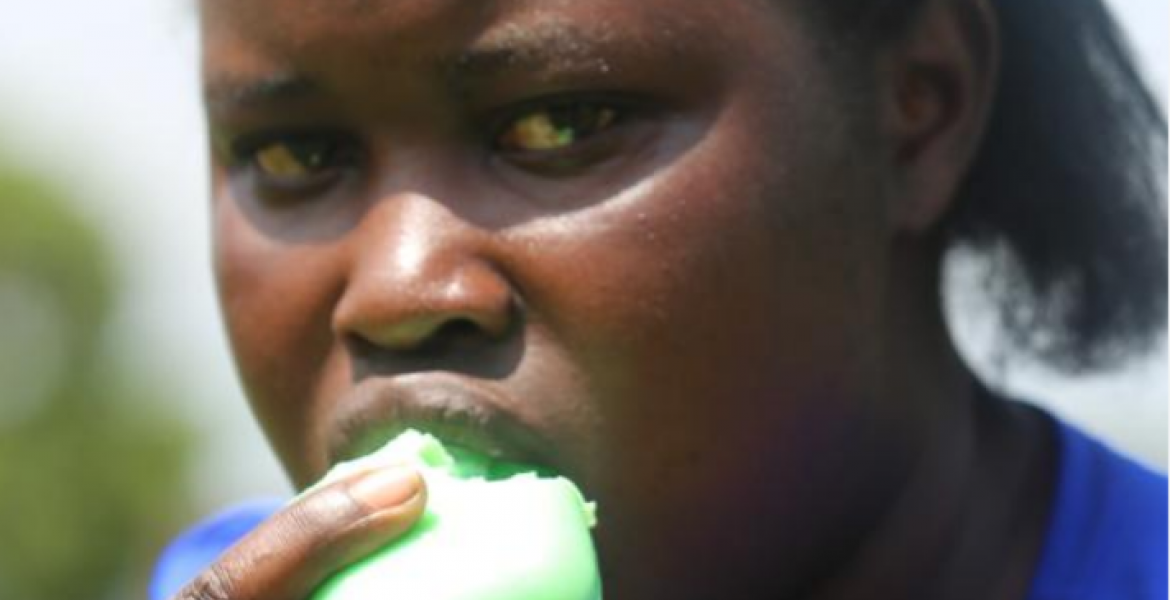 Two Kenyan sisters from Nandi County have shocked many after they revealed their insatiable appetite for soap.

In an interview with KTN News, 24-year-old Sharon Chepchirchir from Kibochi village, Nandi said she began eating soap at the tender age of five. She has been eating soap for 19 years.

“I don’t know why I eat soap but I enjoy it. I discovered my appetite for soap when I was five years old,” said Chepchirchir.

Chepchirchir said this has never caused her stomach upsets, irritation in the mouth or any other health problems.

She sayd she discovered she is not the only one in their family who has an appetite for cleanser. Six years ago, she found out that her younger sister Lydia Chepkemboi, 17, had also been eating soap.

“My younger sister lived with my aunt and we rarely met. One day, I noticed she had a bar of soap in her pocket. I asked what she was doing with it and she said she eats soap. This brought us closer because we borrow soap from one another,” she notes.

When she was pregnant in 2014, Chepchirchir says she asked a doctor whether eating soap posed health risks to her or her baby.

“The doctor said it was the first time he was encountering a person who eats soap. He also said he was unaware of any condition that makes people eat soap. He, however, said soap is not poisonous,” Chepchirchir, a domestic worker, says.

She says the appetite for soap would not go away despite receiving a beating from her mother and grandmother.

“They would beat me but I didn’t stop eating soap. I continued stealing soap until they gave up. I would sneak into bathrooms, even neighbors’’, and steal soap.”

Chepchirchir adds: “Eating soap has never affected my health. I also eat any food. If I can’t get a bar of soap, I lick powder soap.”

She visited two preachers in a bid to end her habit through divine intervention but the problem persisted despite the two charging her Sh5,000 each.

“I recently visited a hospital in Kapsabet and I was told my health is perfect. I’m yet to understand why I eat soap,” she says

She adds: “While in secondary school, I would sleep in a secluded cubicle because I didn’t want my colleagues to know I ate soap. I would buy less of what was considered necessary so I had extra cash for soap.”

Her sister Chepkemboi says she cannot explain how she found herself enjoying soap.The Form Three student says she always has a bar of soap in her pocket.

“I am also shocked that I eat soap. I have worked hard to hide the habit but some of my friends know about it. They say I am not normal. I want to stop but I just can’t,” sayd Chepkemboi.

Their mother Monica Jebet say she unsuccessfully tried all means to stop her daughter from eating soap.

“I did all I could to stop this habit, including hiding soap and caning them but it didn’t work. I am asking specialists to help us understand this mysterious behavior. Some medics say eating soap could be genetic,” Monica, a mother of four, notes.

Solomon Komen, a nutritionist at Tophill Hospital, says the two may be lacking some minerals in their bodies.

“We need to carry out tests to determine the minerals the sisters may be lacking and take remedial measures.”

Oncologist Mark Kiptoo warns chemicals used in making soap, including potassium, are harmful and may lead to long-term effects in key organs.

“The chemicals can damage the kidney and liver if consumed in large quantities for a long period of time,” Dr. Kiptoo tells KTN News.

“Eating soap is strange. The girls should seek medical specialists for tests. They should also undergo blood and tissue analysis to establish if they lack some nutrients.”

This condition falls under the PICA DISORDER. Her liver is already showing signs of disease...look at those eyes. She needs to see a doctor asap. Doctor-me thinks...

Warning! Lady it is high time time to get a new doctor! Signs of liver damage are all over you ( yellowing in your eyes are clear as day)! Of course you are NOT healthy! Did you ever go to school? And even if you didn't, do you really think taking in all the chemicals inside the soap via your mouth makes you healthy? Think again! Time to wake up and smell the coffee or you will be paying the ultimate price very soon. Don't be another fool that we will love to talk about!

Look at those yellow eyes... they may be a sign of a disease. Her liver, kidneys, and pancreas need to be tested, before she is given a clean bill of health.

Warning! Lady it is high time time to get a new doctor! Signs of liver damage are all over you ( yellowing in your eyes are clear as day)! Of course you are NOT healthy! Did you ever go to school? And even if you didn't, do you really think taking in all the chemicals inside the soap via your mouth makes you healthy? Think again! Time to wake up and smell the coffee or you will be paying the ultimate price very soon. Don't be another fool that we will live to talk about!

@Just me is right. That is Pica in action. I have heard taking Iron supplements improves it. Boy, soap! He membrane bits must be foaming! Doctors in Kenya, jamani.