Uhuru: I Will Campaign for Raila in Mt Kenya 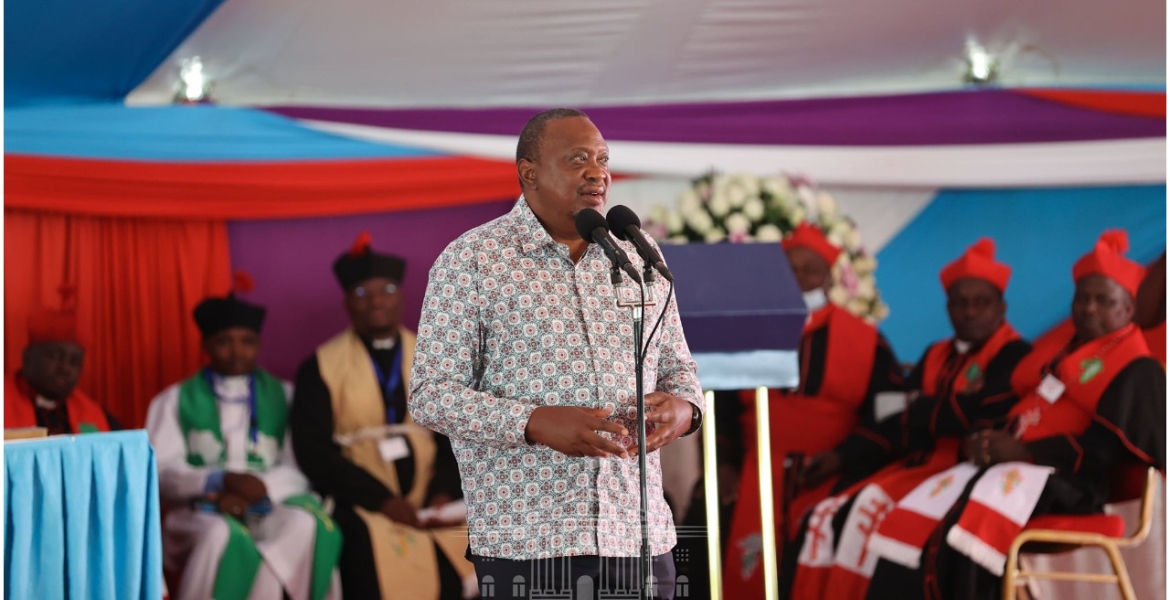 President Kenyatta has reiterated his support for his preferred successor Raila Odinga ahead of the August 9th general elections.

Kenyatta says he will soon start a tour of the vote-rich Mt Kenya region and the country at large to drum up support for Odinga, who is the Azimio-One Kenya coalition presidential flagbearer.

The president stated that he is not afraid of his detractors and will be traversing the country to seek support for Odinga and the Azimio outfit.

“Those who think I will not be on the campaign trail should hold their horses. They will soon see me traversing the country, telling the people my truth. Where do they think they can take me?” Uhuru posed.

Speaking at a church function in Kandara, Murang’a County on Thursday, Uhuru also praised his handshake with Odinga, saying it has brought peace to the country.

“There is nothing I want to benefit from personally. Those who are criticizing the handshake I did with Raila know that we now have peace. Then you hear some people say I should not have had a handshake with Raila? I tell them, I will shake hands with anyone who is interested in peace,” he added.

Uhuru, who was in Murang’a for the AIPCA church’s joint holy oil consecration ceremony and prayer service, also helped the church leadership to shake hands after 17 years of division.

“The way I have brought together and unified these AIPCA archbishops is the same way I want to unite the country,” he stated.

I hate u with passion . looser. Hauna wafuasi mt kenya

You will be surprised. Prepare for Pres. Raila.

Please do not lie because is the Mount Kenya Kingpin with a big K. You can keep hating all your damn want but the pools in your primaries says Kikuyus are not interested in your damn thief Ruto. Hi poor you bitchy dog @maurice, hating Uhuru won’t change a damn thing in your poverty driven life. Suck it up and drive on with your freaking wheelbarrow motherfucker!

Kenyans must stay United to beat the odds of poverty, diseases, ignorance, and the perpetual divisions WSR is deliberately creating among the members of the kikuyu community.

Ruto wants to destroy the kikuyu financial and business empire by using those kikuyu members who are mentally weak and very short sighted.

We can allow Ruto to divide us and then put kalenjins in charge of us. The kalenjin community has no best interests in Kikuyus, and our huge wealth across the country. Ruto wants to have a chance to kick Kikuyus out of the Rift Valley and grab the land owned by Kikuyus.

Ruto double speaks by telling Kikuyus to fragment our tribe while he tells the kalenjins to stick together. Ruto is worse than the clinical masters who used religion to divide us and then stole our land without much resistance.

The kalenjins are all interested in weakening the sources of our (kikuyu) wealth by using stupid folks like Moses kuria, ndindi nyoro, Wahome, Rigathi, Waiguru, Faith Gitau, etc. these line central thugs have received bribes worth millions from Ruto to betray and sell the Kikuyus.

We must never allow these conns and traitors to destroy our community. The kikuyu youths must declare a stand against WSR. They will be the biggest losers if Ruto wins in August 2022. The truth about Ruto must be told to save kenya.

Kikuyus are waking up quickly based on what happened to that ugly woman Cate Warunguru and Gathoni wamuchomba in Laikipia and Kiambu. Kikuyus can’t not be stupid to allow Ruto to divide them.

We must defeat everyone of these traitors anong us and send them to Surgoi to steal from the kalenjins who have taught them the art of stealing.

You kalenjins steal and kill together, all the reasons you are being accused together as a tribe. The theft and corruption tags are in your blood. Change your ways of stealing and Kenyans will respect you.

We see how learned the kalenjins who steal certificates are. Go talk to your uneducated Guy scar Sudi and Ruto with a stolen PhD. Your nonsense stinks to high heavens.

Wesley, you have spent so much of your time writing nothing but gibberish and hoping that Kikuyus are such credulous as you. Why am I saying this? Businesses generally around the country are motivated and run by entities not tribes. There no communal business for Kikuyus or Kalenjin or any other tribal sect in Kenya. What would benefit Ruto for example if he weakens what you say kikuyu business? Absolutely nothing. Everyone knows there’s no such thing as supremal tribal business competition in Kenya. It can only be imagined and created by shallow thinking idiots.
Kikuyus are way smarter than your mischief.

@asssta - tell it to the birds within your kalenjin tribe. Other tribes know Ruto wants to weaken them as he hopes to strengthen the kalenjins who are known thieves. He wants to weakens Kikuyus so they don’t have a chance to fight back when he starts to kill them especially in the Rift Valley. When you drink mursik in the dark Allie’s plotting to destroy the Kikuyus, don’t think Kikuyus are stupid not know Ruto’s skimming to get power. Ruto will never be president in kenya because he is greedy and arrogant.

Please don’t speak on behalf of the Kikuyus because you are the enemy and have no moral voice to air our concerns. Tell your Ruto to go lie to kalenjins and leave Kikuyus alone. We don’t want a thief for president. Since when did a kalenjins speak for a kikuyu?

Njambi, just because I diligently and fairly defend that or those that I think are wrongly accused does not qualify me to be from a certain tribe. Being in favor of for example Ruto does not make me a Kalenjin. Assuming things is squarely inept.

Kikuyus are very smart. They will eat Ruto’s money but vote for Raila for stability in kenya. Ruto is nose diving every place and toy will be surprised how bad he will lose the presidential elections. Ruto is a an unelectable conman. A guy who have killed so many Kenyans - Yebei, Juma, Muteshi, Kenei, Mwikali, etc can’t be president….

You are the last fella to advise Kikuyus @asista. We have you very well. As a matter of fact you will be the first person to kill Kikuyus if by bad luck Ruto Ruto’s presidency. You have no moral authority to address Kikuyus. Where were you when Ruto burned kikuyu women and child inside the Kiambaa church? Every @Wesley says is very true that your folks have always been enemies to Kikuyus. You have blood of our children in your hands. So shut up.

Asista, Businesses might not be ‘tribally motivated’ but can be choked, resource wise, based on tribal biases.Ask the other 40+ tribes or read up

Kenyans are a very hardworking and innovative people. That is supported by the the country's GDP even though the difference between the rich and poor is big. The only problem in my country of birth is; most people tend to use emotions when looking at matters politics instead of hard facts and logic. Uhuru means well for the country. Has any president in Kenya been found guilty of stealing someone else's land other than Ruto? Vote wisely my people.

He couldn't campaign for himself but can do for others? Hmmmm

How much campaigning can you do for your stupid self except yapping here for your big thief Ruto?

Kenya is not ready for a Ruto presidency. It’s not humanly possible to trust Ruto with any kind of power rest kenya goes the somalia way in a year’s time. A thief can’t lead a progressive country.

Cast the 1st stone if you are clean