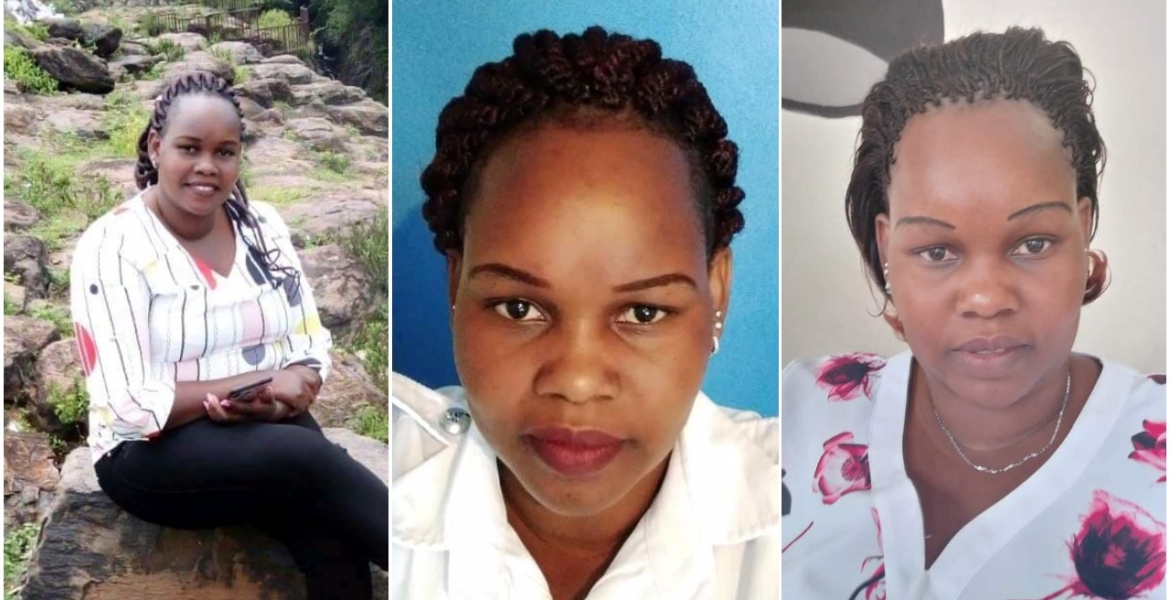 Caroline Kangogo, the police officer wanted over the murder of two people has reportedly sent a threatening message to her estranged husband.

Reports indicate that the 32-year-old suspect warned her husband, a senior police officer attached to the Maritime police unit in Mombasa, that he would suffer the same fate as her other victims. The couple has two children together, aged eight and 11.

Corporal Kangogo is suspected to have shot and killed Police Constable John Ogweno, 28, in his car parked within Kasarani police quarters in Nakuru on Monday before fleeing with his loaded Ceska pistol.

The suspect allegedly emerged in Juja, Kiambu County on the same day where she also shot dead another man identified as Peter Ndwiga Njiru, 32.

She is said to have lured Njiru to a room at Dedamax Hotel in Kimbo at around 4:00 pm and shot him on the head at point-blank range before leaving at midnight and fleeing to an unknown destination. The man’s body was found lying in a pool of blood on the bed.

Kangogo reportedly told an attendant working at the hotel that she was going to buy toothpaste, only for her to escape. CCTV footage captured Kangogo, dressed in a yellow hoodie, leaving the hotel at around 12.30 am on Tuesday

Workers at the hotel told detectives that they did not hear any commotion or gunshot during the period when the crime was committed.

The Directorate of Criminal Investigations (DCI) has warned members of the public about the suspect, describing her as armed and dangerous. Detectives have intensified a search for Kangogo, who was stationed at Nakuru central police station.

“We are cautioning members of the public especially men to be on the lookout for the rogue officer, who is luring men to her trap before executing them in cold blood,” DCI said.

“Let nobody trust her since she is armed and dangerous. Should you spot the suspect who is covering herself in a buibui, do not hesitate to contact us.”

This ind of Insanity happens when a Woman takes Viagra or Cialis meant for Men. Hata huenda ikawa ameanza kumea Ndevu na Misuli for Mezaring the 2 Enhancers meant for Men only.

She's a woman with real balls, I agree.

If true then for sure,"hell knows no fury than a scorned woman"....from Maxiley..
Let's go back and read all we have commented on this story.

“We are cautioning members of the public especially men to be on the lookout for the rogue officer, who is luring men to her trap before executing them in cold blood,” DCI said.
Men ,you have been warned,should you be a victim and survive with life threatening injuries,we dont want to here"I did not know..." Dont even for a minute think that you might our smart her and get some free action...Too risky.
So Men, keep your libidos in check.This should also be a remind to men that they should curtail their wondering eyes and groping hands.Stay home with Madame.

This one woman outsmarting the whole Kenyan force...hahaha! These Kenyan men are just tolerated...the day Kenyan women will go
Medieval on their behinds, watajua hawajui

Both muguruki and possessed by the worst demons! She is surely going for men alright!

I'm hearing alot of deaf silence from criminal psychologists. Mediocre analysts giving useless comments. Only way out is to bait the lady using a player but unfortunately all players are no longer venturing out after 7pm. Lol

What make you think that she will take the bait?Its just amatter of time before the get her.How far can she run anyway,without "cash".She may have afew criminal connections,but these fellows are also watching their backs.

From the few videos we saw kwa mtandao from policewomen, I can say, without doubt, that women in the police force are undergoing some TRAUMATIC EXPERIENCES from their male BOSSES and peers... and since they were silenced and ORDERED NOT to post their grievances, without being given a SAFE alternative route to air their grievances, THIS seems to be the easiest OPTION.... SOMETHING IS NOT RIGHT on how our POLICEWOMEN are being handled. Ask their BOSSES.