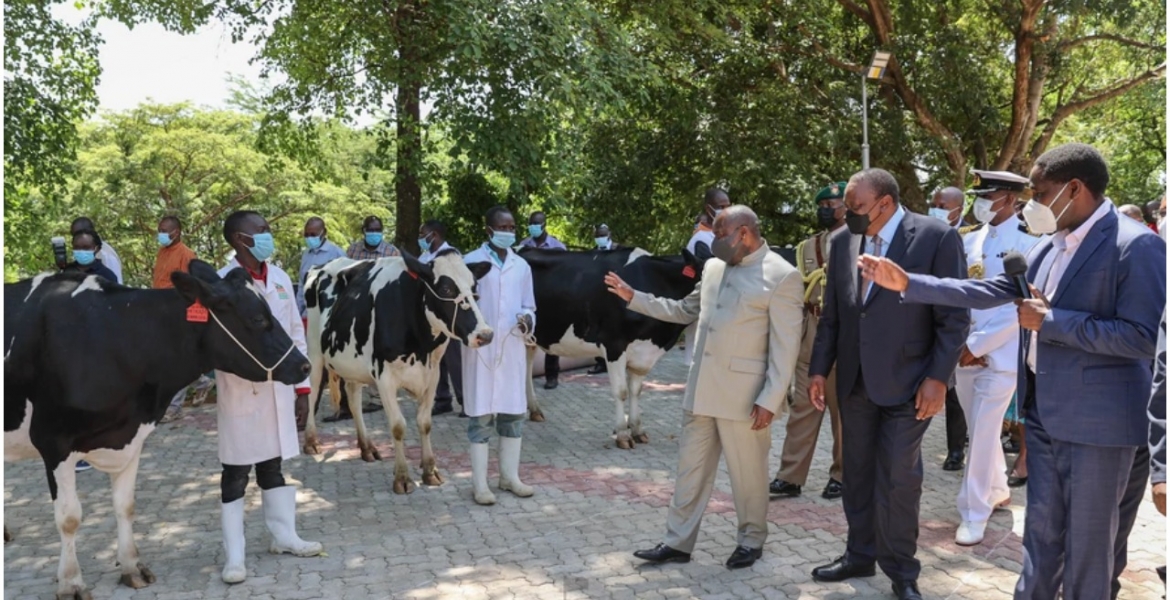 The Friesian heifers were presented to Ndayishimiye at Kisumu State Lodge, where the two held bilateral talks earlier in the day.

Ndayishimiye, who arrived in the country on Monday for a two-day State visit, is the guest of honor at the 58th Madaraka Day celebrations that will be held at Kenyatta International Stadium in Kisumu on Tuesday.

At the State Lodge, the two leaders witnessed the signing of bilateral agreements on trade and investment to strengthen economic ties between Kenya and Burundi.

Kenyatta and Ndayishimiye directed their respective trade ministers to address barriers inhibiting trade between the two countries, including the use of Lake Victoria as a means of transportation.

The two presidents also agreed to review the 2018 Joint Permanent Commission for Cooperation agreement to expedite the implementation of signed deals.

This is President Ndayishimiye’s first State visit to Kenya since coming to office in June 2020. He is accompanied by Burundi First Lady Angeline Ndayubaha.

You don’t hear much about Burundi. First time I’ve it mentioned in the news in a long time.

Those cows had better have come from Uhuru’s farm and what gift was he given in return.Are we self sufficient in milk production now that we are giving out live cows

Go raise your own one cow to get your milk! Are you not a man enough to provide to your needs, especially the need of milk?

Why always whin when others extend a kind gesture to others? @gurst you should know better! In kikuyu land, we give al the time because we are rich and we have pretty through our hard work! Where are from by the way - somalia? I get it!

It is better fir Uhuru to give than to receive; and yes all the 50 Frisian cows came from Uhuru’s farm! Any further question @guest?

Is unyatta looking for a second wife for post retirement? 50 cows smells fishy

The way I've been hoping my own tribesman will one of these days think if me and gift me kasomething.... He should have gifted 50 kyuks with each a cow and their lives would have changed forever. Huyu hata maisha take hayataskia any difference. Charity begins at home mundu was nyuumba..

Uhuru vision is expanding brookside past Burundi. Sungura mjanja but again its biz