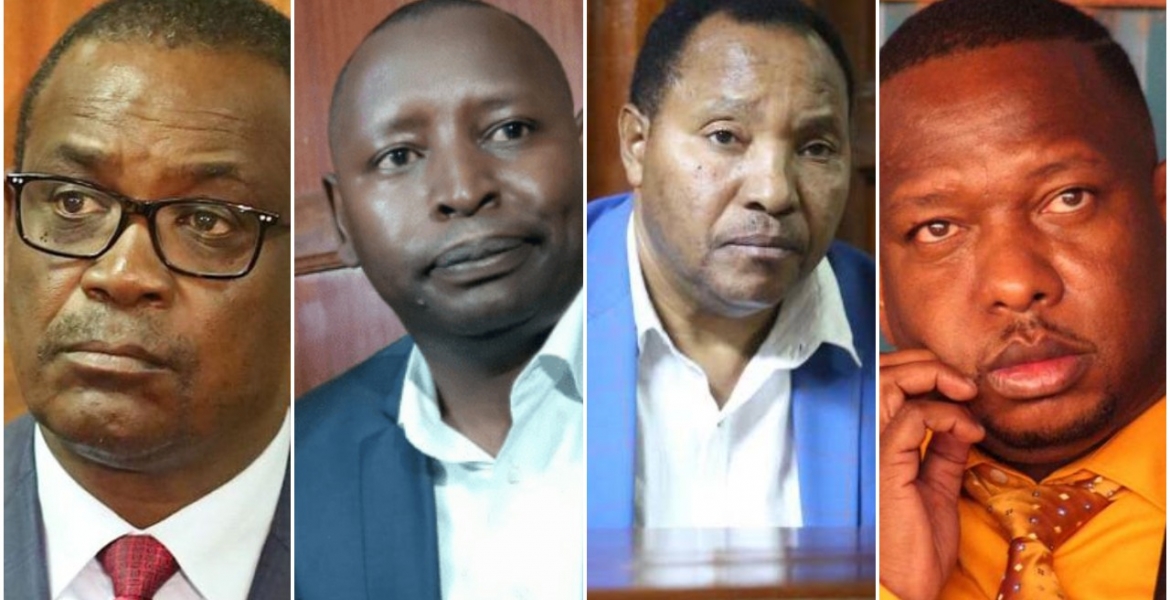 The Ethics and Anti-Corruption Commission (EACC) says it is probing three former governors and one sitting governor over unexplained wealth amounting to Sh11.5 billion.

Appearing before the Senate Justice and Legal Affairs Committee on Tuesday, EACC CEO Eliud Wabukala said the four are under investigation over the alleged illegal acquisition of properties worth a combined Sh11.5 billion.

All the four are currently facing graft-related charges, which saw both Waititu and Sonko impeached while Lenolkulal was barred from accessing his office until his case is heard and determined.

Wabukala told the committee that the commission has seized assets worth Sh25 billion stolen from the public over the last five years. EACC also presented the loss of more than Sh30 billion during the same period.

Over the past five years, the anti-graft watchdog investigated 1,000 corruption cases, with 269 of them being prosecuted in courts.

He mentioned budgetary constraints, politicization of the fight against corruption, and a weak legal framework as some of the main barriers hindering EACC’s work.

HUSTLER'S at their best...yet we elected them in office...
Something is wrong with us Kenyans.
Electing Thieves and murderers in public office just shows how we get manipulated.
What happened to the ethics commission?
I bet it is as corrupted just like the president.
REVOLUTION will be key to clean this house once and for all.

EACC,you can use all kinds of fraud investigative words there is in human languages to appear like you are doing your job.You can probe,investigate, under-investigate, over investigate,inquiry, under-inquiry, over-inquiry nothing will tilt corruption icebergs in Kenya. Execution style revolution will bring to an end this greed to get rich illegally by any means!

Line them up at Uhuru park.

EACC,you can use all kinds of fraud investigative words there is in human languages to appear like you are doing your job.You can probe,investigate, under-investigate, over investigate,inquiry, under-inquiry, over-inquiry nothing will tilt corruption icebergs in Kenya. Execution style revolution will bring to an end this greed to get rich illegally by any means!

Legal frame work- is euphemism for corrupt judges lawyers,magistrates,advocates,and AG. We have known this all along. If you lay down laws,and dont follow them,then who are you making them for?It is said that laws are made for those who obey the laws.It gives them aframe work. The problem we have is what do we do with those who break these laws-with impunity?
Ofcouse,Iknow jails are full of criminals,but these are not the law breakers that can bring down the country. We need the untouchables to be touchable and jailed.
Nothing is wrong with the laws we have. Only if they could be applied equally,and fairly,then justice will have been served.

Wabukala & Co.should have first investigated the number of Committee meetings the senators themselves sat with deliberate intentions of earning shs 10000 sitting allowance.They should also be investigated for increasing their pay by shs 450000 per month house allowance.I wonder if Wabukala’s boys have probed the theft of shs 720b.per year Uhuru confessed three months ago.

EACC?? It should be DCI.
These are notorious thieves.

I can’t wait to reading the findings.

These four thieves have no shame! Waititu was pretending he did not have the money to pay some loan. What a shame.