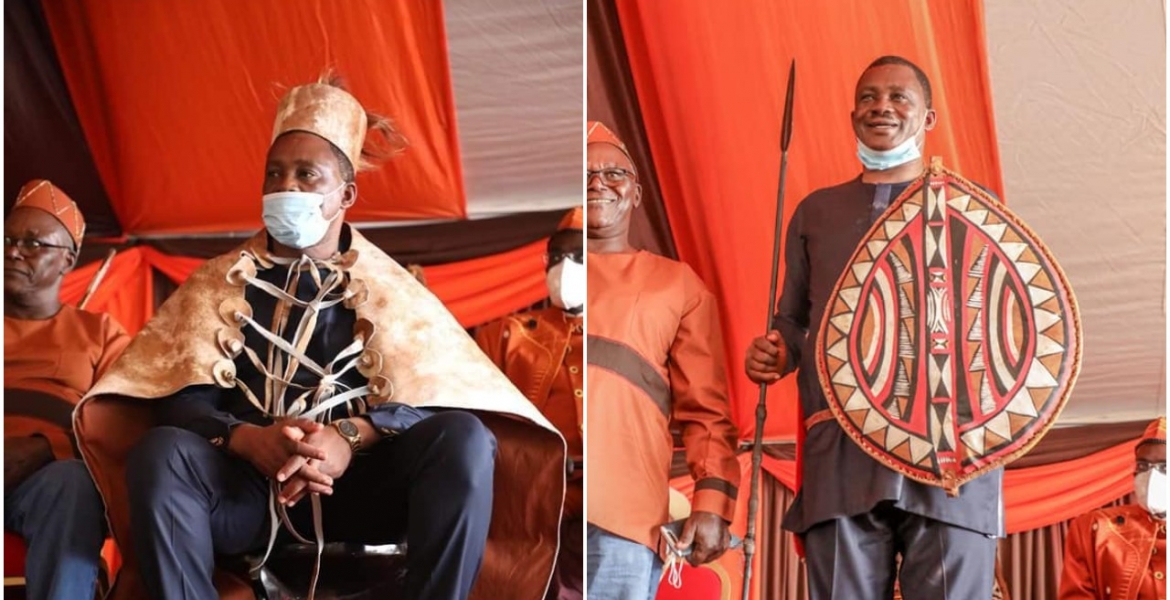 Muturi was installed during a ceremony held at Mukurwe wa Nyagathanga shrine in Murang’a County on Saturday.

"In the shrine, the top most elders of Kikuyu are called Maturagu. They are holding a prayer for Mr. Muturi and also blessing him because the journey he is about to take is a tough one," an elder at the coronation was quoted as saying.

His coronation follows eight-day seclusion in his house, where Muturi underwent cultural cleansing, according to reports.

During the period, he was allegedly restricted to a special diet and only met with elders who have undergone cleansing.

The ordination prepares Muturi to take over as the region’s kingpin from president Kenyatta, who retires next year.

"There will be all forms of opinions but the idea is to be able to reach out to everybody through persuasion, consultation, and discussion," Muturi stated.

The decision to install Muturi as Gema spokesperson has caused sharp divisions among Kikuyu elders and political leaders.

Ndung’u Wa Gaithuma, national chairman of ‘Kiama Kia Ma’, and his deputy Njoroge wa Mugo distanced themselves from the ceremony, saying it was inspired by greed and is against the Agikuyu culture.

But Kiama Kia Ma Murang’a branch chairman Kiarii Rugami, who presided over the ceremony said, “Muturi is the one to unite the region since a majority of politicians have failed to give direction to the people.”

“We have other places that can be used for political activities but not the shrine,” said Governor Wa Iria.

I think that @Mwakilishi is sleeping at work. The quality of response is low, because the quality of information is also low. I think that John Wanjohi has delegated this role to someone who is less competent.

Can you re- write the whole story @nomad and ask Mwakilishi to pay you, or you just want to whin like a menstrating she dog without a solution?

Whose spokesman?Who elected him?When?Which seat?Where?What is Kiama kia MA?Why does thug Uhuru send proxies to install thugs to GEMA?I even heard Murithi Kang’ara lecturing and demanding all AGikuyu to respect his president.The idiot does not know respect is earned.How can I respect thug Uhuru for leading other gangsters to loot shs 720b per year on top of shs 200b.EUROBOND-2016,shs 218b COVID fund-2020 and institutionalized corruption of shs 14b. for owning political parties?RISASI TU.

You asked to be represented because you are an idiot and the only decision you can make is stealing from women and little children! Aren’t you really stupid?

Useless time wasting activity. Uhuru deserves to retire and be totally forgotten. He will be Well remembered for corruption heists in Kenya where his goons stole billions and nothing happens. There is better use of time clearly not in shrines and anything close to Kenyattas Muturi, murathes, waiguru should totally be removed in Kenyan politics. Thefts nothing else

Bunch of adults ( foolish elders) acting like toddlers coronating another fool that is clueless about what the region needs to develop! When is Kenya going to act maturely to make the right economic decisions to benefit every body?

Doing some shady stuff is what will get you locked in by Ruto, the know killer of the kikuyu community!

You all better get organized to lock Ruto out of the presidency before it is too late! Ruto is pretty bitter and freely willing to revenge the fall out with Uhuru by eliminating several kikuyus.

You all will be squaming like he-goats squalls when getting castrated with Ruto at the helm! Ruto is the enemy #1 to the central Kenya people. He is showing you some big white teeth now but that will quickly change after 2022.

You better take him seriously before he takes all of you to the slaughter house; worse than getting burned inside Kiambaa church! The devil is a true liar and he will get you after telling sweet little lies!

Didn't they have something better to do?
UJINGA tutawacha lini?
How do you make a rotten thief a spokesperson?
Kenyans are smarter than this crap .

drama drama this is an insult to mountain citizens . when will these old dogs disappear to hell