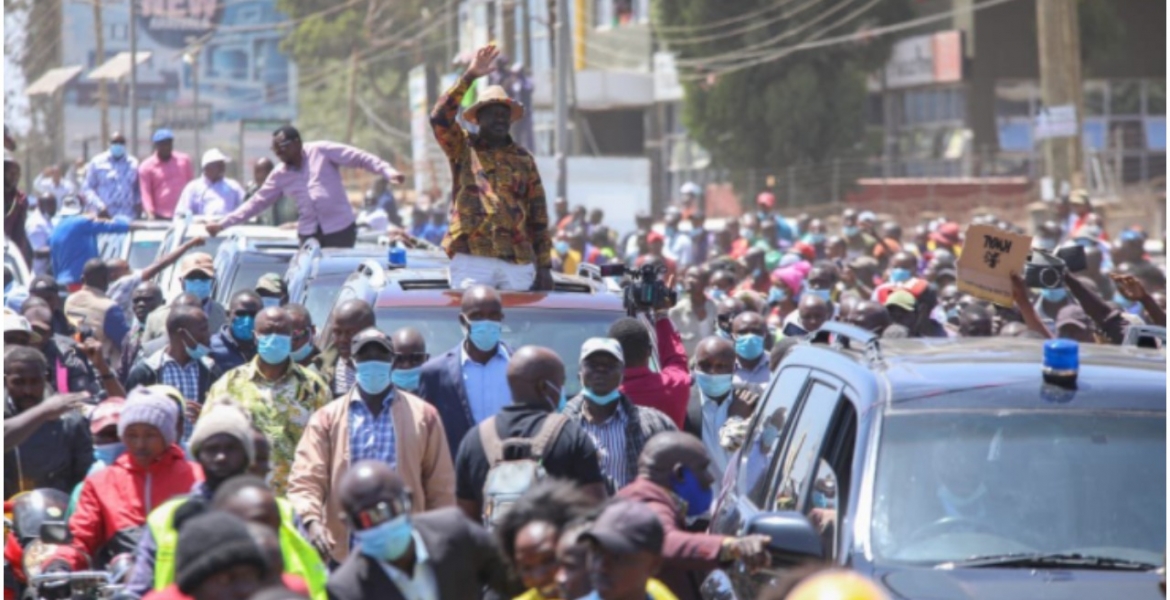 Odinga and his convoy made a stop at Githurai on Wednesday to woo residents to rally behind the Building Bridges Initiative (BBI).

An ugly confrontation between supporters of Odinga and Deputy President William Ruto ensued, with the two groups hurling stones at each other.

This forced Odinga’s motorcade to speed off from the area as police officers fired teargas to separate the warring groups.

He later addressed residents after the police’s intervention, where he urged the youth to support BBI, saying it will transform their lives through the creation of institutions such as the youth commission

Odinga was heading to Murang’a County ahead of the launch of BBI campaigns in the Mt. Kenya region and across the country after IEBC cleared the initiative, having certified that it received the support of at least one million registered voters as required by law.

He sent the Bill to all the 47 county assemblies for consideration within 90 days.

“Pursuant to Article 257 (5) of the Constitution of Kenya, 2010, the Commission hereby submits a copy of the draft BBI (Constitutional Amendment) Bill 2020, to your County Assembly for consideration within three months from the date hereof,” Chebukati said in a letter to the 47 county assembly speakers.

He added: “In conformity with Article 257(6) you are required to submit the decisions of your County Assembly to the Speakers of the National Assembly and the Senate within three months from the date of this letter.”

Secession is the way to go.
It is clear the Kenyan government has been hijacked by people with personal agendas such as
1. Raila Odinga
2. Uhuru Kenyatta
3. Gideon Moi
3. Musalia Mudavadi
4. Wentagula
5. William Ruto
6. Kalonzo Musyoka

You can add Kisii since they are already in Western.

The rest of us can form the People’s Republic of Kenya.