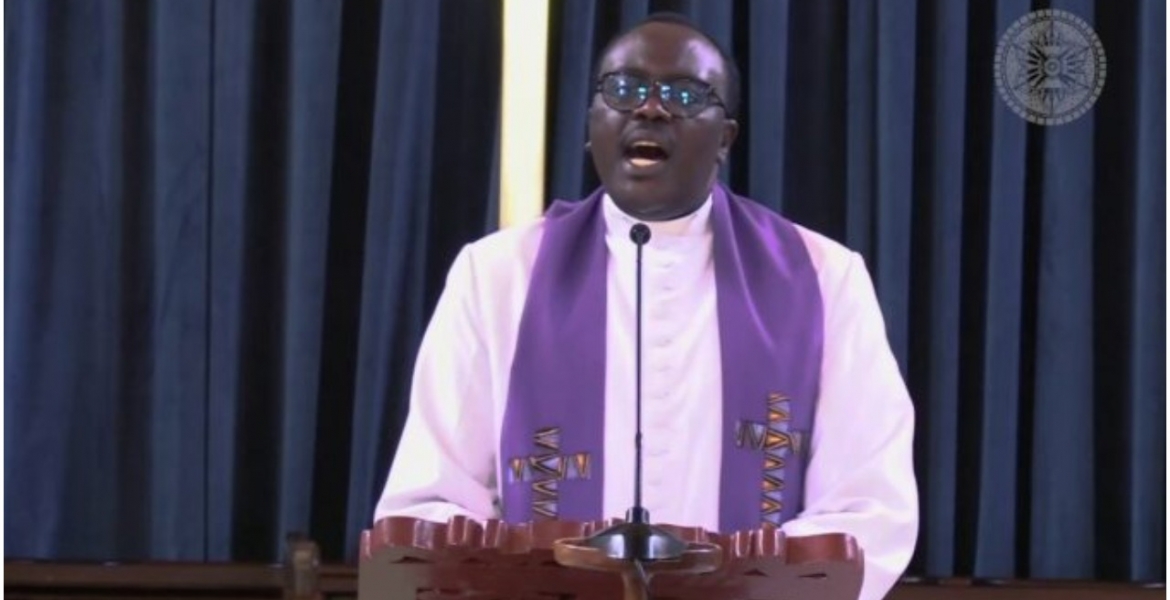 All Saints Cathedral Provost, Canon Sammy Wainaina says he has been receiving endless calls from Kenyans after he called out President Kenyatta during his sermon last Sunday.

A video of Wainaina castigating Uhuru for admitting that the country loses at least Sh2 billion daily to corruption went viral on social media.

In his sermon, the cleric questioned why the president cannot use his position and state machinery to tame the vice.

“Mr. President, are you telling Kenyans that you are defeated? Who will then save Kenya from self-destruction if the President cannot? No wonder we have become a nation of thieves where everyone wants to become a politician,” he said.

He further poked holes in some of the proposals contained in the Building Bridges Initiative (BBI) and questioned whether the initiative is a priority.

“We have money for BBI yet we don’t have the same to build schools as our children learn under trees. Counties cannot receive 15 percent of their allocations yet we are being told that they will get 35 percent if BBI is passed. If you can’t give 15 percent, how will you give 35 percent?” Wainaina posed.

In an interview on Spice FM on Tuesday, Wainaina tore into political leaders, saying they should stop acting like demigods and accept that they are servants of the people.

“I think we have overrated our politicians. They have become our bosses and that’s why when they come to church, they want me who is their servant to give them a chance [to speak],” he said.

Wainana said his phone has been ringing off the hook ever since he made the remarks, with Kenyans thanking him for speaking on their behalf.

“I found it interesting because my phone today has been extremely busy and most of those who have called me are Christians. They have said ‘thank you’ for speaking on our behalf.”

“People can brand me whatever they want to brand me but I have a divine mandate. When I did the first sermon and talked about the hustler-dynasty narrative, I was branded anti-DP, and the whole week I was bashed on that and I didn’t even respond. Yesterday, I was told that I am anti-president and BBI, and I was also bashed for that,” he added.

Mmmm, what the man of the cloth is saying is not new.I remember Uhuru himself lamenting on seeing a policeman take abribe,in the broad day light.Sadly the incident was quietly hashed.
Folks let not totally blame the politicians.We own large part of the blame onto ourselves the voters.We vote in thieves.We let the fox guard the hen house.
This corruption has more to do with sin,than politics.So the man of the cloth should find out away to make people not sin.Just like they dont listen to him,so do they not to Uhuru.Doesnt the good book say seek ye first the kingdom of God.Or is this just a tale.
Mr.preacher, instead of castigating Uhuru,why dont you tell your God to invoke the"Ananias doctrine".That would solve alot of our problems with our leaders.
We need action .We talk too much and do little.Time to reverse the order.

I guess Maxiley you are not getting the point. The man of cloth is responding to Uhurus' remarks and asking knowing how much the government is losing ,what is Uhuru doing about it? How would he make people not sin if God does not prevent them from sinning?

@ Kithoi, I got his point all right. I just chose afew bones to pick up with the preacher.Main point to me is that he is not saying anything new.Neither is Uhuru.
Preacher should spend time telling people not to sin.

@Maxipad chill. The preacher is just calling out Uhuru on his words...2 billion schillings stolen everyday is not pocket change. No one else has publicly called out Uhuru. So how do suggest the man of the cloth make people not sin? May he should bring whips and chains to church.

@ kkk grand wizard,how is calling our Uhuru on his words solving anything? You chill out,and mobilize worthy candidate whom you think can do better than Uhuru,come 2022.HOw about that?

When your bum is leaking, you need to be seeking @Maxipad.

@ kk, i bet you are very proud of your intellectual response.Thanks.

@ Maxiley, the “ Ananias doctrine “ that’s funny.
You are taking the man of clothe back to Damascus. I bet the two billion a day is getting him whacked out.

This preacher is doing what we have waited for years to see the head of the catholic church do. Be the countries moral guiding light. Save us from these thieves.

The very first person to blame is Brother WAFULA CHEBUKATI. Why? He is the only person with the power to certify anyone who wants to run for an elective public office. He is the head of IEBC. Why does he allow people with challenging past behaviors run for office?

We all know our current vice president has a questionable past, yet he is campaigning for the Kenyan presidency in 2022. Not only is his past actions questionable, he is campaigning today without demanding that his captive sheep-like blind followers to wear face masks. He is therefore exposing and spreading COVID-19 to his followers.
Why does the president allow him to spread the COVID-19 viruses in his open-air public meetings? After all, he (President Uhuru Ngina Kenyatta) has the power and the authority to bring to an end his holding his careless public meetings. During his public meetings, his sycophants are in very close proximity spreading this deadly viruses among themselves. In addition, as soon as they return back home, their immediate family members, relatives, and friends are potential victims of acquiring this deadly viruses.

Corruption in Kenya can be minimized tremendously if people were asked to conceal their cell phones and record any transaction where a bribe is part of the deal. I have suggested to Brother Matiang'i (in charge of internal security) to take advantage of this readily available technology but to no avail.

As the late first president of Tanzania (Mwalimu Borito Kambarage Nyerere) once said, "It can be done. Play your part."

@Imara Daima, Chebukati like always has his own dirty pockets. But I think you are pushing the blame too much to him. He is reading from where everyone reads that ; unless you are convinced of a crime, thou you shouldn’t run for public office. Those that are supposed to take the thieves to the guardhouse are busy themselves stealing. Aren’t you surprised no one has shouted a scandal for the past few years. This is not to say there hasn’t been any scandal (s). Everyone is busy “filling up mouths”. Don’t think Matiangi has bad ears. He is a very good listener. But at moment he is busy filling his own too
We now have country surviving to pay salaries on borrowed money! And to the extend that the president himself attests of a two billion theft daily is quite unprecedented.
While I agree with you on wearing masks, the exercise has to be across board. At the moment let’s not pretend that Ruto’s meetings’ covid is the one spreading more than Uhuru or Raila or all the other gatherings happening in Kenya. People must wear masks irrespective. I have seen so many people in Kenya wearing masks but on their necks or chins. I think it’s not that they don’t know. It begs the question : is anyone in charge?

@ Ndugu Imara.Yes it can be done if we have the will to do it.And I dont understand why we dont do it.We need mass protests each time acrook is exposed.And rest only when they are rotting in prison.
It is a great shame that pillars of our political system have found ways of circumventing the laws with impunity.Take for example that ndugu Wafulla you mentioned.Why does he get away by allowing thieves to run for public office?And worse,get elected...Yes it can be done.May be we have not reached apoint of- enough is enough.I hope not...

The Provost is one Public figure who leads by example. Those who don't know him can find his other sermons online. He also shares his horrific experience with Covid19 (stigma etc).

Thank you for your objective comments especially about the wearing of face masks.
I now challenge the President of the Republic of Kenya Ndugu Uhuru Ngina Kenyatta to declare that anyone holding public rallies or meetings and does not require the participants to wear face masks be arrested immediately and banned from holding any meetings in future for life.

Thank you Ndugu @ Maxiley for sharing with us your exceptional and unique words of wisdom.

Good job Pastor that route is real a straight way on caring for the common wanaichi who they don't comprehend the initiatives of BBI yet.
So far Uhuru is a little better than Trump.

Maxiley , is this kind of guys like to argue making cheap and baseless points .

@ doctor,i have read his posts for awhile,and he appears very objective.Give me 3 baseless points from him.

Wainaina is simply blind to the facts! Stick to preaching and let Uhuru do his job!