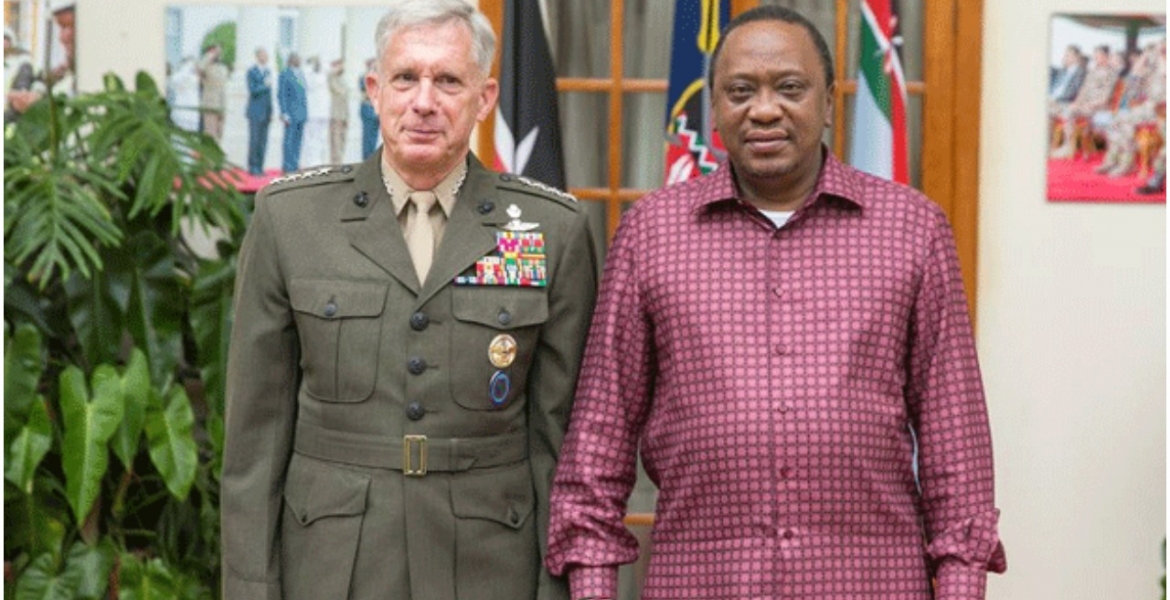 The two held a meeting at State House, Nairobi on Tuesday where they discussed how to strengthen military cooperation between Kenyan and American forces.

"President Uhuru Kenyatta today at State House, Nairobi met Gen. Stephen Townsend, Commander of the United States Africa Command (AFRICOM) during which they discussed the strengthening of military cooperation between Kenyan and American forces," State House said in a statement.

The meeting was also attended by Kenya’s Chief of Defense Forces Gen. Robert Kibochi and US Ambassador to Kenya Kyle McCarter.

The talks come a few weeks after outgoing US President Donald Trump ordered the withdrawal of nearly all American troops from Somalia.

The move is said to be part of a global pullback by Trump before he exits office in January that will also see him draw down forces in Afghanistan and Iraq.

There are about 700 American troops in Somalia focused on helping the Somali army defeat the al Qaeda-linked al-Shabaab insurgency.

AFRICOM has been pivotal in restoring peace in Somalia in partnership with the African Union Mission in Somalia (AMISOM) forces.

Uhuru Kenyatta is a thief& a murderer.

How do you entrust your security to criminals?? How?

Secession is what is needed.

Did you ask from the US army to help KDF run KMC? US army does not run slaughterhouses so they will not help.

This man sure loves these colorful shirts and he actually wears an undershirt lol. Seems like he’s given up on suits. I guess it’s business casual for him everyday. I’m adopting the same at my job and if my boss asks me I’ll let him Kenyan president does it, so can I.

KK, but you are not a president. Mr Kenyatta is the boss. Become a boss first

Last time I checked my job title was not president. I’m getting there though. Once I finish this YouTube training on how to become president, I’m going to apply for the job. My resume is good to go.

What is with Uhuru's pot belly? It does not look normal. Could be a sign of kidney problem.

Hahahaha... That a good one BUT let all be nice.... In Africa we are told to respect and if you do not, you will be cursed BUT something l have noticed, White people even in church they do not deliver curses but in African churches is the order of the day. I came to realization that why we will remain backward.. see Africa and backwardness of wachawi.... Who will agree with me on this one. We are cursed left and right, at homes from grandparent, to parent, pastors and teacher yaani "urogi" 101. But them that are covered by blood of Jesus and have come to see the light and nolonger in darkness are free and freed from this curses.... Too much been in the west has helped and Thank Godl can compare the Blessings and curses and who prosper. Amen Brothers and Sister. Wanjohi bring a preacher now.

The military chief surely looks like he does a lot of crunches.