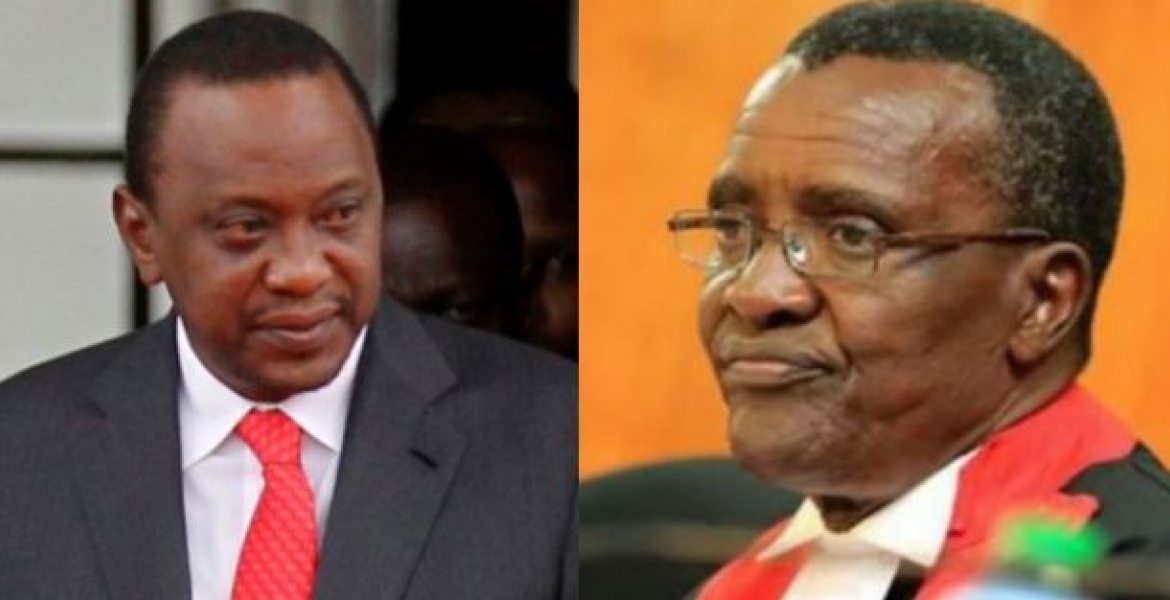 Maraga through a statement on Thursday said the order has no effect on the Judiciary and Judicial Service Commission (JSC), which are recognized as independent institutions under the 2010 constitution.

He further noted that the order titled “The reorganization of government” can only apply to the Executive arm of government, which is headed by the President.

In the new order, Uhuru listed JSC among institutions under the State Law Office and the Department of Justice.

“While the Executive Order has no legal effect as the Constitution is clear about the creation of the Judiciary and the JSC and their authority and functions, it is important that the public understands, for the sake of our constitutional democracy, that both the Judiciary and the JSC are independent organs which are neither assigned functions nor derive authority from the Executive branch of government,” said Maraga.

“It is imperative that this institutional independence be clear in all government publications and orders.”

The revised Executive Order No.1 of 2020 was issued to reorganize the national government and reassign functions and institutions among ministries and state departments.

“I want to believe that this was an inadvertent error and that the office of the President will promptly issue a correction,” noted Maraga.

Uhuru sees what Trump is doing in the US and thinks he can do the same in kenya.

It is time to let the Judas Escariot, Maraga, go!!! He is the enemy of the people and a close friend of the DP Ruto.

He shares the proceeds of corruption with Ruto! That is why he is now showing his selfish true colors.

He is a wolf in sheep’s woolen clothing! What is he gonna do!?

I hope you are not saying this defending uhurus actions on executive orders. No matter who we support, we cannot sit back and watch as the president undermines the constitution. Maraga is right and can change that.

Maraga killed the constitution of Kenya long time ago! Uhuru is returning law and order back to the people of Kenya. Maraga should resign! And you need to sit back and let Uhuru do the cleaning for Kenya to be strong again. Where were you when your Tanga Tanga was running all over the country mocking and destroying development? Shash!!

He will die like Moi and we will celebrate.

So you plan to live for ever! Give us a freaking break! Maraga is cruelest!!

Uhuru Kenyatta is the problem.
He’s a thief, a liar and a genocidal maniac who has killed a lot of Kenyans.

And I ask you again. Are you going to live forever?! The problem with folks like you is that you have failed to take responsibility for your own actions and to help Uhuru in National building! Tou are quite blind to your laziness except a big mouth! You are like a dog that vomits and then it turns around to eat it’s vomit plus the dog’s poop! I hate to say but I surely feel sorry for you! You are nothing but a fatherless kid who had no body to teach discipline and the values of hard work! No wonder you are blaming Uhuru for your absent father - dead or alive!!

Help who???
I cannot be associated with illegitimate public servants-garbage.

As for my father, your issues with him is none of my business.

The eyes of a frog can’t keep cows from drinking water in a stream; and your nasty cries are similar to those of a hungry hyena! Tell your mama to interpret what I just told you fool!!

You ain’t nothing but a barking little dog lost in the midst of your own dead imaginations!

@guest, “help who?”! I guess he meant you help yourself and your mother!! That kind of attitude you possess is what has kept Kenya behind. Pluck your head off your ass and start being productive; for once in your clueless life!!

Mr. President, now you have the most favorable opportunity to fire this Kangaroo Maraga! The Chief Justice does not understand the law! Send him home!

The person who needs to go home to him father Jomo Kenyatta is Uhuru.
Thanks.

Uhuru is taking our country back from thieves; including the useless judiciary! Give Maraga a free Mercedes 600s and send him home. That is all he cares about! It is time fir him to go!!!!

What is this foolish Maraga talking about? Stifle him with cutting the judiciary funds; that simple! He thinks his go-nuts are bigger that any body else. Neuter the fool!!

We kept quiet in 2017 after you acted idiotic! We will not keep quiet at your madness this time around!

Uhuru is illegitimate and we still want secession.

Or you think Kenya belongs to his mother.

At the right time Kenyans will be free from demonic families like the Kenyatta , Odinga and Moi families.

Here is a Devil incarnate talking crap!! What are you gonna do about big mouth!?

Secession.
And Kenyans will be free at last.
Free from demonic families and their clueless supporters.

We are in charge of Kenya! You are just an observer on the sidelines! What are you gonna do when we come for you??

😂😂😂😂
If you had control of that country you would not care what Kenyans say online.

South Sudan is looking for idiots like you. You can easily move there but I doubt they will take a low life like you! Secession my freaking dead ass! Go to hell!!

Maraga is expecting a bribe with a Mercedes 800 STZ. Maybe two or more... He is a greedy man.

I will go with Mutua Makau’s and Grand Mulla’s legal opinion on this matter in support of Uhuru! Maraga’s opinion should be treated with the contempt it deserves! He is not well versed with the law. Maraga cannot even finish a legal argument to what he is protesting! He must be campaigning for a parliamentary seat in Kisii.

Maraga - You are the “inadvertent error” to have been appointed the Chief Justice of the honorable Republic of Kenya! Your appointment should be reversed now to correct the grave error.

The judiciary is not Co-equal to the executive branch! Maraga you just told us that nonsense when you were begging for money from the treasury? Now you want to feed us with some more nonsense to make DO Ruto happy? No reversal my foot!!!.

How many arms if government do we have?

27.5 is the total number of the arms of government in Kenya. 1/2 more can be created to make you happy. You must be a dummy not to know that standard 1 civics lesson!

Maraga completely misunderstood Uhuru’s executive order! He feel aggrieved by the executive because he has benefited from the DP Ruto’s corruption and theft of resources. Can one if the well educated legal officers explain the executive order to Maraga before he step on his tongue?

Maraga and the judiciary should be put under the executive branch of government to clean that corrupt arm. Maraga and his team have been involved in too much corruption to a point an outsider is needed to clean the judiciary. The custodians of our laws have turned out to be the worst thieves of our coffers and have lost the trust of the people. LSK is also made of thieves too.

Stop creating side shows when a Uhuru is reorganizing the government to near it work effectively for us Me Chief Justice Maraga! Where were you when Tanga Tanga was all over the country politicking and stealing? We need to take back the control of our government and that is what Uhuru is doing! We don’t recognize the judiciary as the arm of the government anymore - they are all thieves and the aid and abet other thieves to destroy our beautiful country! We will fight for Kenya until our last drop of blood. The judiciary have failed us! Maraga is incapable of overseeing justice in Kenya.

This nonsense about who is Co-equal with who need to stop! You cannot have thieves being CO-equal with people of good faith who are trying to salvage the country. This idea that the judiciary was co-equal with the executive had made Kenya fail. It is what has brought us wher DP Ruto was doing things in a lawless manner because GE felt he did not have to answer to the president! Let Uhuru re-write how the government need to run. Maraga and LSK are just opportunists and thieves who are ruining Kenya.

The idea of these judicial officers telling us what is good for Kenya is a fallacy! They have stolen our country blind and have no good intentions for the ordinary Kenyans! The judiciary has turned out to be the cartel of thieves! They care less about the ordinary Kenyans! They have been destroying our country for the longest time. Maraga does not even know his job. He protects all the thieves in the judiciary including himself and his beputy! Kenyans are tired of thieves!!

Dictator in-chief; As of now, Uhuru is; President, chief justice, Nairobi Governor, Jubilee thief, Everything Kenyan is his and his Kenyatta family; and poor Kenyans are just watching hoping for a miracle. The episodes of 4th world country! This explains why I don't miss 254 and thrashed her pport. This is train wreck president! Goodluck wakenya!

You all kill at will because of money hunger and greed! No wonder Kenya has gone to the dogs; your thieving dogs! You are now bribing Maraga to protect Ruto and Echase!

Now that his wings have been clipped, nyonga yourself, and taking the earliest kite to see the Lucifer!

My observation is that Kenyans cannot engage in a sober discussion without mentioning Ruto, BBI and the president. This is myopic and is the reason Kenya cannot be a democracy.

Now I fully understand all the reason Trump deported your behind from the US!

Maraga, what is “uta do attitude from the President”? Cut down your arrogance and go talk to the president personally instead of rushing to the media to attack him! The president say “uta do” you go do. That simple!

The president said the 41 judges you presented to him to be sworn in are tainted. But now you want to force the president to swear in corrupt judges?

You say there are 16000 case waiting to be handled by 31 judges amid covid19. So you want the president to hire 41 more judges who can not even start working immediately? Where is wisdom on your part here Maraga? “Uta do”!

Does that make any sense to you? You can take up some of those cases yourself and also ask the 31 sitting judges to work overtime! “Uta do”!

Kenyans want to cut down on excess salaries in your judiciary. Also the rate of corruption in the courts is making Kenyans lose confidence in your ability to lead the judiciary. “Uta do”! Eeeehee!

Are you tainted with corruption as you seem not be concerned about the corrupt lot in the judiciary. Kenyans are saying “Uta do” to you Maraga!

Stop your high handed-ness and talk to the president with some respect! “Uta do”?

You are not equals with the president although you seem to think you are because you nullified his election in 2017. Maybe that is the root cause of your simple problems! Go figure!!! “Uta do”! or you keep whining till dooms day. “Uta do” is what Kenyans are telling you! Wake up CJ.