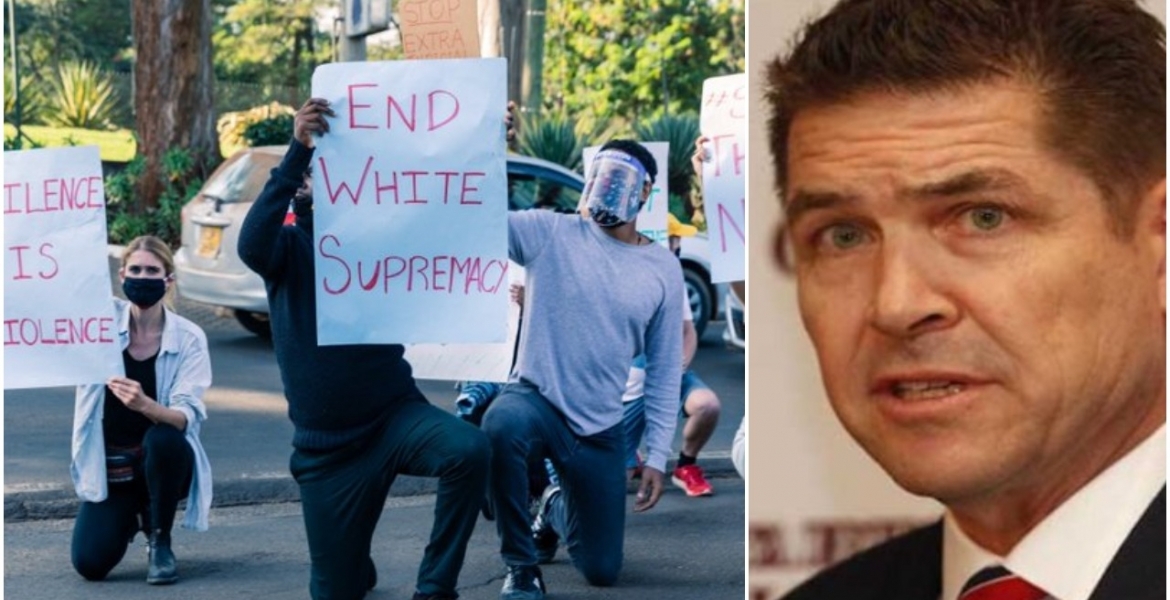 US Ambassador to Kenya Kyle McCarter has refuted claims that he snubbed protestors who marched to the US Embassy in Nairobi.

The group of demonstrators camped outside the embassy in Gigiri on Tuesday morning to demand justice for George Floyd, an unarmed African-American man who was killed by a white police officer in Minneapolis, Minnesota last week.

46-year-old Floyd died after the police officer named Derek Chauvin kneeled on his neck in an incident that was captured on camera. His death has sparked a wave of violent protests across US cities.

McCarter through Twitter on Wednesday termed as false reports that he declined to meet and address the group outside the embassy.

“Totally false. The protesters, (thankful that they were peaceful), were asked to leave by police before I could meet them & make my statement to them outside the gate, even though it was a security risk I was willing to take. So I posted the video. No contact info on letter btw,” McCarter wrote while responding to a tweet by CTGN Africa.

On Tuesday, Ambassador McCarter released a video addressing the protestors after they left the embassy.

He said: “I hear you. Whether virtually online or even standing peacefully outside our Embassy, I hear you. The actions of police officers in the killing of George Floyd are abhorrent. It must result in justice and accountability for those responsible.”

“While no action can bring back George Floyd to his family, the officers involved have been arrested and both the Minnesota State and the national justice system are in the midst of full investigations.”

An autopsy commissioned by Floyd’s family and lawyer revealed that he died of Asphyxia, a condition arising when the body is deprived of oxygen, causing unconsciousness or death.

Derek was arrested on Friday and charged with third-degree murder.

My Kenyan people before you go marching for an African American, please start with your own Country where the Police kill and disrespect Kenyans on a daily basis.we all have been victims of the Kenyan Police one way or another and its sad our President has never done anything to fix the Police problem. Poor Kenyans need a voice, our voice but when we start with Floyd it does not make sense. Wake up Kenyans.

You're sent to Quarantine to contract Covid-19 (share cuble, bathroom, tap water outside). This is what Kenyan need to demonstrate on and not about things happening in a supper power country.

Most of the people who demonstrated outside US embassy, Nairobi were US citizens. So, guys chill out. Demonstrate, too, for the Murders in Kenya by police officers