Ambassador Kyle McCarter Speaks After Protests Outside US Embassy in Nairobi 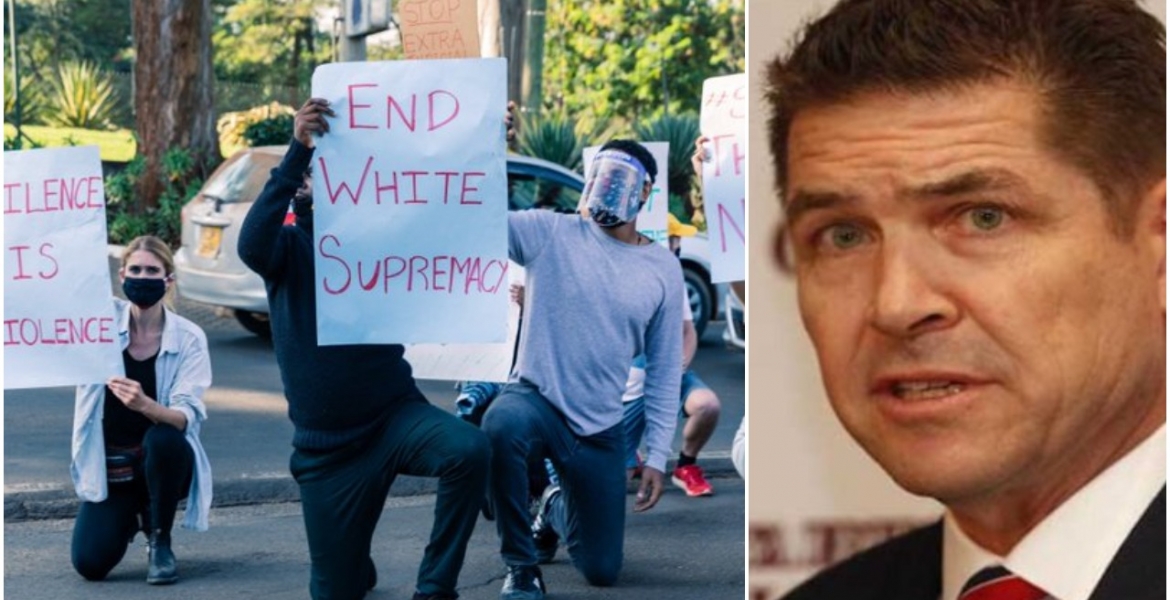 US Ambassador to Kenya Kyle McCarter has reacted to Tuesday’s protests outside the American Embassy in Nairobi.

A group of protesters camped outside the embassy in Gigiri to demand justice for George Floyd, an unarmed African-American man who was killed by a white police officer in Minneapolis, Minnesota last week.

46-year-old Floyd died after the police officer named Derek Chauvin kneeled on his neck in an incident that was captured on camera. The killing has sparked a wave of violent protests across US cities.

On Tuesday, protestors arrived outside the US embassy in Nairobi carrying placards with various messages. Ambassador McCarter addressed the crowd through a video.

He said: “I hear you. Whether virtually online or even standing peacefully outside our Embassy, I hear you. The actions of police officers in the killing of George Floyd are abhorrent. It must result in justice and accountability for those responsible.”

“While no action can bring back George Floyd to his family, the officers involved have been arrested and both the Minnesota State and the national justice system are in the midst of full investigations.”

McCarter further assured the demonstrators that justice will prevail in the end.

An autopsy commissioned by Floyd’s family and lawyer revealed that he died of Asphyxia, a condition arising when the body is deprived of oxygen, causing unconsciousness or death.

Derek was arrested on Friday and charged with third-degree murder.

Ambassador McCarter response is well calculated not to offend Mr. trump and the host country - just to save his job.

Kenyans, stay away from domestic issues of foreign countries!! Let us keep our brothers & sisters and all black people on the four corners of the earth in our prayers!!

You sound like a slave. How many times do these racists lecture us,even tell us who to be out leader(s) ? Do you understand that people have died, been falsely imprisoned....because of people who think like you ? You are a sellout ! No wonder you are hiding your identity ....

The riots/protests are the necessary evil needed to bring change to the United States Blacks. It is not only about Police brutality. Look at COVID-19 -- who are dying? Look at employment--who holds all the menial jobs? look at layoffs--who hits the door first? It is a multitude of issues. George Floyd was only the catalyst. Bittersweet...we need change now.

Mr. ambassador you can ignore these people. These are what are called Instagram and facebook protests. They are photo op protesters. We are fighting the virus here and I don't see them demonstrating against it.

Just go tell Me Ambassador that you want to lick his behind....Do you know how many Kenyans have been murdered just from last year in unexplained circumstances ? Do you know SALOME MORAA OMBATI was murdered in Ocean county jail NJ on Feb.2017 ? Do you know that I was IMPRISONED and TORTURED in NJ for being Kenyan and they even attempted to murder my late dad when he came to the U.S.wanting answers ?

I agree. Let's 1st fight our Inter-tribal murders here in Kenya: The Log (in our eyes) first; the Speck (in other's eyes) later.

Thought the response by ambassador is an echo of what has and is being done, the response of leaders to this issue should recommend strategies for correcting systemic racial injustices. It is unwise of the legislators to solve the current issue without paying a visit to the institutions system that serve to oppress the black. Corrective measures should go beyond this case. Showing a blind eye to the real state of racism with the US serves to anger the world. The world questions the leadership of the US