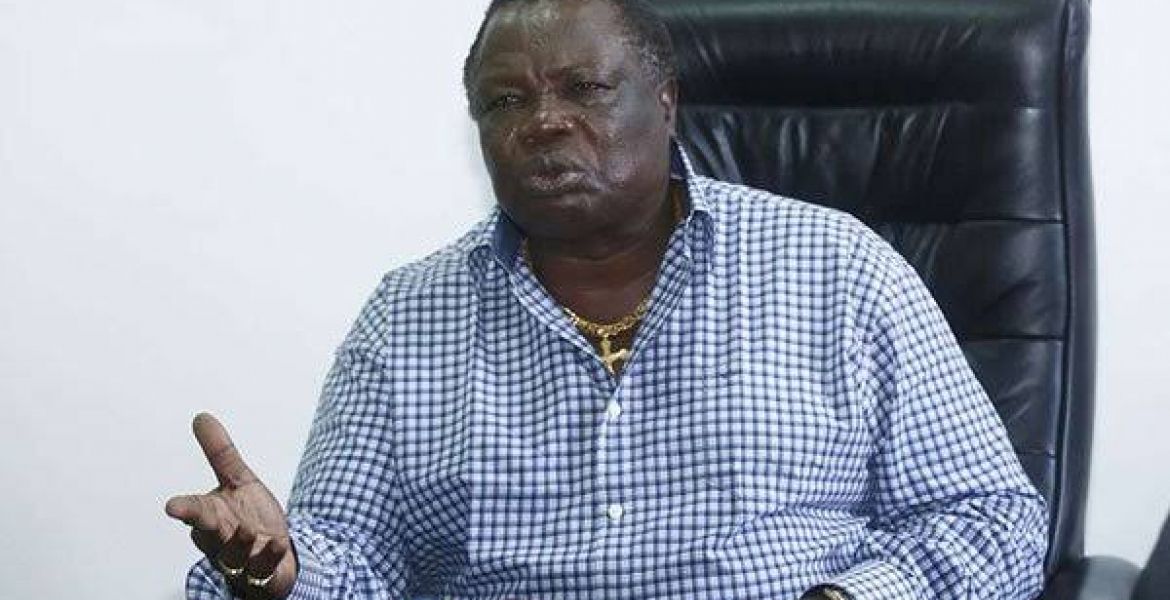 Central Organization of Trade Unions (COTU) secretary-general Francis Atwoli caused a drama during a press briefing in Nairobi on Monday after he angrily smashed his mobile phone on the floor. Atwoli was speaking about the access of Deputy President William Ruto's Harambee Annex office by suspects in the alleged Sh39 billion fake military equipment tender led by former Sports Cabinet Secretary Rashid Echesa. He accused DP Ruto of blatantly lying to Kenyans that he did not know that Echesa and his accomplices had organized a meeting with two foreigners at his office. "The Deputy President wants to tell us that when Echesa and the white men were at his office for one hour and twenty minutes and no one called to inform him?" a visibly irritated Atwoli posed. "... that is the second highest office on the land... hiyo ni mambo ya wajinga hiyo! shenzi!" he added before throwing his smartphone on the floor. He further claimed that DP Ruto was not telling the truth about the killing of Sergeant Kipyegon Kenei, who was the head of security at his officer. Kenei, 33, was found dead at his house in Imara Daima, Nairobi on the day he was supposed to appear before the Directorate of Criminal Investigations (DCI) for grilling over the military equipment tender scam. "Anaenda kudanganya Mzee amefiwa, familia yake kwa matanga," Atwoli said. Here is the video of Atwoli smashing his cellphone on the floor: https://twitter.com/dailynation/status/1236919432196349957

Please come down Mr COTU Secretary General, Atwoli! Kenei’s gruesome killing have driven the whole country over the edge! People are very frustrated and angry. Kenyans are still trying to see Ruto as a man they can call their DP again.

I did not know how much Kenei’s murder got me so angry until I drove my new Range Rover over the cliff.

Atwoli, it is ok to break your phone as you feel quite offended by the many lies DP Ruto is pending around to deflect Kenei’s murder crime from himself! Let’s wait for the DCI to do the investigations without any interference, hopefully!

Nasikia huyu jamaa has incontinence issue?? Useless ugly big mouth and fat asshole Atwoli! I bet he peed on himself after he broke the phone! Dp is elected and valued over 3million Kaleo votes! Try fighting that useless minyo tumbocrat!!

We dont need this kind of drama from our leaders. Why dont you calmly and collected ,tell us the same thing.We are not fool, we'll understand,that is unless you make yourself unintelligiable .Quit acting like an irate neanderthal.Dont act like you have more at stake in the outcome of what Ruto does,or does not do.It time for you to retire anyway. How long have you held that post? 50 years?

This stingy pig is stage managing throwing his phone so as to eventually get rid of it and erase it’s contents. That phone has the data leading to the conmen at the Dps office and the killing of Kenei.

@transista - can you kindly put your ranting in a sworn statement to be used as evidence in the murder investigations of Kenei? Put out or shut your silly mouth!

The ranting is your idiot! He pretends as if he the one who is most bereaved. What interests does he have to an extent of setting a show to break things? Ostensibly to conceal evidence.

Atwoli and his gang is about to get surprised soon . Game plan for uhuru Ruto is to check there base . And the jubilee base sounds ruto damu which is good so Atwoli and rao keep BBI tune down because it seems dead on arrival

Ruto should be arrested or atleast impeached.We are done with the Moi era of political enemies disappearing others being tortured in Nyayo house.The problem this judiciary is also just as corrupt if not worse.Who will save Kenya only us.If Ruto survives this and gets elected President we are back to the dark days of Moi and broken phones will be the least of our problems