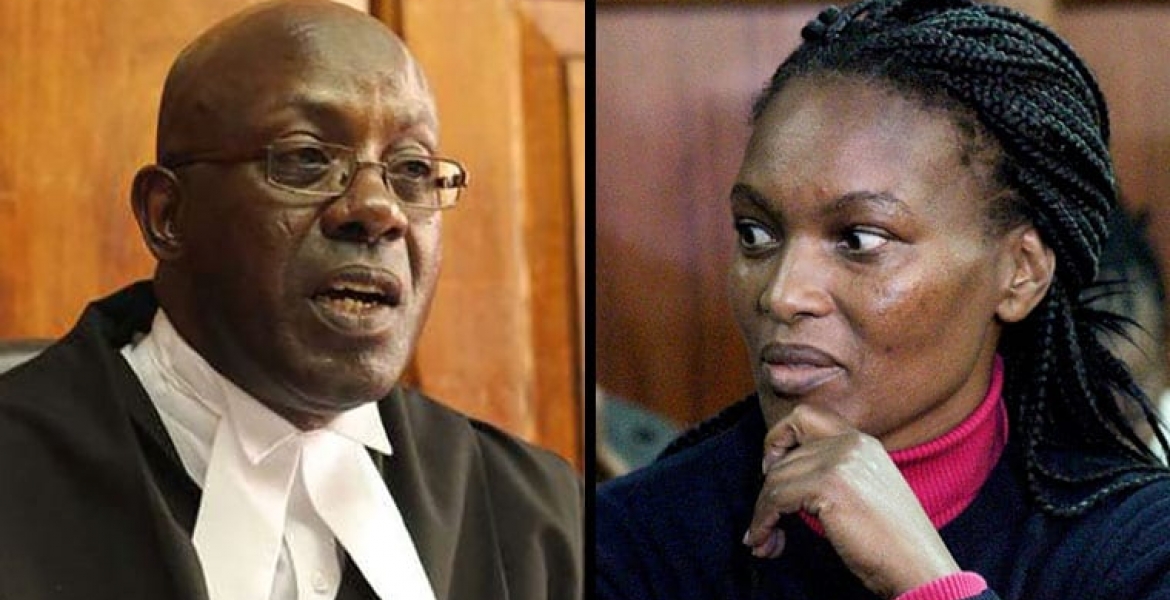 Justice Sankale was arrested in Mombasa on Friday and was taken to the Directorate of Criminal Investigations (DCI) headquarters in Nairobi for questioning over the murder of Dutch tycoon Tob Cohen.

He spent Friday night at Muthaiga Police Station and was released on police bond on Saturday pending arraignment in court on Tuesday, February 25th.

Sankale is said to be close to Tob Cohen’s widow Sarah Wairimu, who is the prime suspect in the murder of her husband.

Detectives said the two were in constant communication and the judge allegedly coached Wairimu on what to say as investigations into the killing of the businessman were underway.  Their communication allegedly began way before Cohen disappeared and later found dead.

“We are definitely charging him with murder. We have established a prima facie case and we are sure it can stand in court,” said Kinoti.

“It is self-telling. What we are tracing is involvement as far as 1999. For a murder charge, what to look for is whether there is a motive. In this one, there was a motive by the judge.”

A recent report by Daily Nation suggested that Justice Sankale and Wairimu may have been in a romantic relationship if short messages they sent to each other through the phone were anything to go by.

Cohen, who had lived in Kenya for over 30 years, was found dead on September 13th, 2019, nearly two months after he went missing. His lifeless body was discovered inside an underground water tank at his home in Nairobi’s Kitisuru estate.

Deal with him Execution style if found Guilty of copying Mulembe people (and Nyemelearing other people's wives). No wonder he is KiparaNgoto (like Samson) and Kibogoyo (like WaigaMmbwa).

@Guest 1,Mulembe men are either irresistible to women or those women cannot think on their own.Which is which...see idid not mention consenting adults...

You're one who Advocates for Consenting adults; not me. But watch (without Consent) the HIV/AIDS😈ravage your Consenting clients.

@ Guest 1, I will never encourage,anybody to go after anyone's spouse,or girlfriend for that matter.But if I find you getting it on with your neighbor(christian brother James),that's your business with that neighbor- so long as he is not raping you.Sounds like consent right...?
If you decide to cheat on your spouse,christian or not, I dont see why any one should be involved.Time to be involved is before that...
By the way I have heard that cheating can strengthen some marriages. Would you go for that if your marriage was faltering...?Or pray?

@ Settled Nomad, you will not get an answer from Guest1, she only answers to questions that do not challenge her beliefs-Or make her question her position,which might be wrong...
I have asked her," If Adam and Eve are our first parents, how did we get from 2 to 4,to 6 to 50,to 100,000... She knows that her true response would make her very uncomfortable.And probably shatter her faith...

... have you ever considered it a possibility that the Woman may actually be the one who initiated the relationship? It takes two to tango... why do you always only blame the man?

There is more than meets the eye between these two murderers; the main reason why they are both working hard to beat the course of justice for the deceased!

Oh! Now our Kenyan judges and lawyers are becoming murderers. God forbid. Don't we have another guy "Lawyer Nyakundi" who shot dead his own 29-year old son Joseph? And these are the same people Kenyans are banking on to apply the law? God forbid! Criminals ... It is time to clean house.

So sad for Wanjiku especially. The helper eating the subjects..

It's like RIGGING a Presidential Election. But thank🙏God that Raila is still Alive (unlike Cohen). To you Wairimu aka Karua! And how about to you too Kibski/Uhuru aka Kantai?😬

let the lady free like migori Governor, babu, Msando killers and many others who are walking scot free

Criminal justice system all over Kenya. Evey official is getting away with murder, literally. Killer governors, judges, that horrible Babu are all walking free. What kind of justice is this?

Nihii mguu ya tatu ya wanaume having a mind of it's own...or is it God... even men of high IQ seem to lose it where the 'cookie' (or is it wealth) is given. A whole judge, he knows very well that text msgs are not secure...yet he goes ahead to plot with this harlot... Mugathe wakuona oteaga wamwene.

She thought by screwing the judge she had won the jury.Not a young woman but her actions reflect the thinking of a teenager.As for the judge wisdom clearly does not come with age what greed not too bright the body was found within the compound no effort or thought was given to disposal of the body after the murder.

Are these the same judges that are supposed to hear our cases justifully....How can they even pass a judgement fairly if they are the same corrupt murderers judges colluding with clients??how corrupt is the law...smh