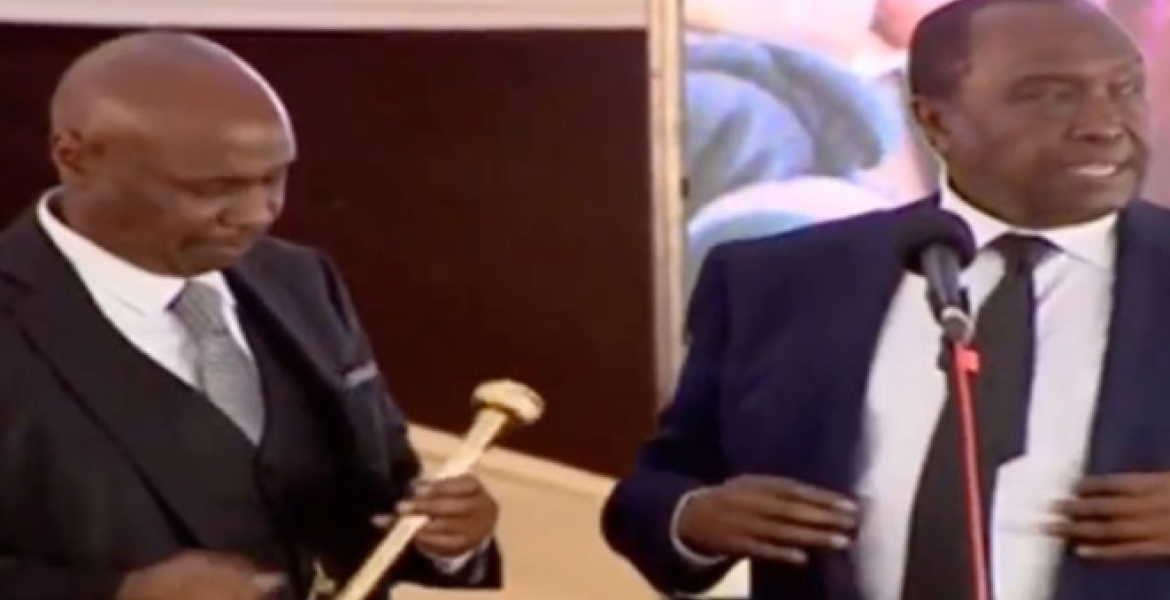 This was after his elder brother Raymond Moi, who is the MP for Rongai Constituency, handed him the baton, popularly known as ‘Fimbo ya Nyayo’, that was given to him by Tugen elders during the funeral service of the former president at Kabarak, Nakuru County.

“You have our blessings to go for it,” Raymond told his brother Gideon after handing him the baton in a short ceremony presided over by Tugen elders.

Tugen elders handed the ‘rungu’ to Raymond by the virtue of being Mzee Moi’s eldest son alive but Raymond called Senator Gideon to the dais and gave him the baton while declaring that “as a family we have given you this mandate, take over from where Mzee left.”

Senator Gideon accepted the role, saying: “I will take up the challenge.”

‘Fimbo ya Nyayo’ was a symbol of power and authority and never left the late president’s side during his 24-year reign as Kenya’s President. At one time, a replacement had to be flown from Nairobi to Australia when the first one broke in New York.

Lee Njiru, Moi’s long-serving press secretary during an interview said the former president was never comfortable in public without the knobkerrie.

The knobkerrie handed to Senator Gideon on Wednesday is similar to that used by his father. It is made of ivory and gold.

This is what happens when you have uncultured children! In Kale culture; One doesn't NOT handout or inherit the property of the deceased until a cleansing ceremony is performed(usually 6-1yr). My 18 yr old nephew knows shit like this BUT Moi's kids don't know! Kwani hawa walilelewa na maid ama wamama? Hakuna mzee mkale to advise them? Seriously! wow!

this is bullshit traditions. That being said, these people are dreaming. their dad stole for 24 years, no more. who is next? Uhuru's kids that can't even speak Swahili? pumbavu has.

yo, hold on, did they say made of ivory? they are wrong for that....they should be arrested!

It's Not Yet Uhuru, that's all.

I don't know much of Kalenjin traditions. What I do know is that Gideon grew up in Nairobi, went to private schools in Nairobi and like all but one of his siblings, had very little contact with Kalenjins for the 1st three decades of his life. It's not his fault that he wouldn't know his traditions. The elders bestowing him with the honor are the ones at fault since they are well aware of that as well as the traditions. That said this is some dumb s**t.