William Ruto: Raila is Not My Enemy, We Are Competitors 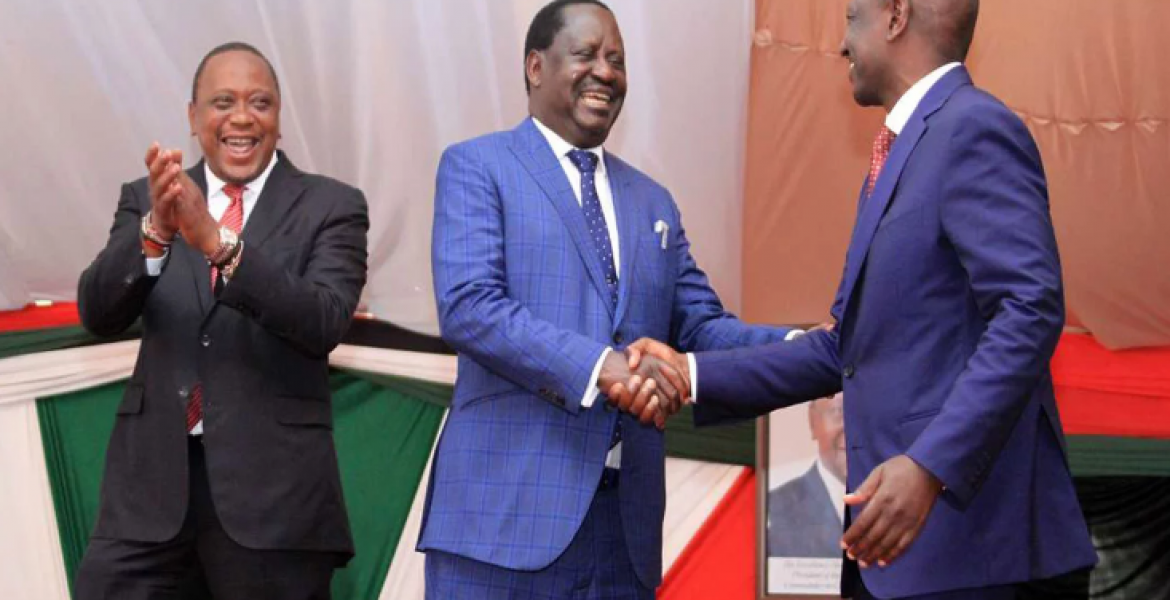 Deputy President William Ruto says ODM leader Raila Odinga is not his enemy and that the two are only political competitors.

DP Ruto said this on Twitter while reacting to The Standard’s front-page story titled: “When Old Friends become Enemies.”

“Enemy NOWAY? Good people I have no enemies because there is no need for baggage. Competitors yes !! That’s the richness of democracy we should celebrate,” Ruto tweeted. 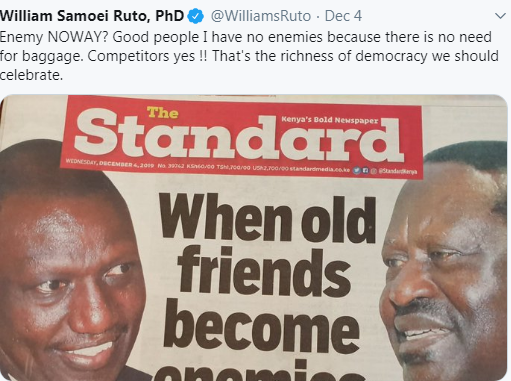 His tweet elicited mixed reactions from Kenyans on Twitter with some disagreeing with his statement.
@FrankMtetezi tweeted: “😂😂😂 why are you against handshake "Wakora" as you call Baba ??”

@The_Senator045 stated: “You only differ and disagree on some ideologies.”

@Arapkemeikimu said: “Ruto, you are stronger and better  with Raila than with Uhuru.”

@PhannieAK wrote: “We know you!!! We know you. And we know you and democracy is like maji na mafuta.”

Odinga and Ruto, who are expected to go head-to-head in the 2022 presidential contest, have in recent years traded insults with Odinga branding Ruto a corrupt leader while Ruto has constantly labeled the ODM leader a ‘witchdoctor.’

Which competition? looting the country. I see three looters right there.

I think that I know exactly how things are going. Uhuru, just like Kibaki before him, just wants to complete his term in peace. To do this, he needs Raila on his side, hence the 'handshake'. And like Kibaki, he knows that he has no control over how Mt Kenya will go, when he exits, so he avoids making any promises. Ruto will have to campaign for himself, when the time comes. He should not expect 'freebies', like Kalonzo, and Musalia, who expected to be given leadership on a silver spoon, because they felt that they were entitled to it. My advice to Ruto, as of now, is that it is still a marathon. Stop campaigning too early, otherwise you will spend all your energy and Goodwill. Wait for the final sprint, when the goal is in sight, and use your energy to cross the finish line.

Come on Ruto - who do you think you are kidding?? The problem with Ruto is his level of immaturity and childishness! He uses his immature “frens” such as Sudi, Nyoro, Murkomen, Kihara, etc to insult those with whom he deeply hates. Ruto can’t stand those who perform better than him, such as the super CS Matian’gi. A person who demeans and regularly attacks subordinates should not qualify to leader a nation. His constant attacks on Raila, Matian’gi and others ( directly or indirectly through his sycophants) leaves a bitter taste in the mouths of many. Leveling insults on his opponents is in many ways an indirect method of attacking Uhuru. Nothing Ruto does is in good faith or health to any sort of completion. Ruto insults those who tell the truth about his love for corruption and theft of public resources. Ruto, stop lying and tell the truth!

Spot on sir. This thief got to go come 2022. His very basic trick of using proxies to attack others and thievery maybe the only thing he learned from his fake doctorate.

Ruto/Raila
Kenyans let Democracy work on the two guys who are really Smart. Let us stay out of each other but we will vote and see one vote rule Democracy.

Let Kenyans decide on the ballot box when the election time and day comes. As they say in Luhya land, “ vitu vichenjanga”!

Sometimes it s not wise to be the subject of abusing others. Ruto try to grow up. Raila has one vote but ahuge following that can bring any leadership down. If u dont behave ua intetion to rule kenya will be twarted by Raila the man kenyans can not ignore.

Ruto is cheating on us, he hates Raila to the core

Ruto hates opposition,real or perceived, with all his hear. As we talk,Raila $ Matiang'i are his worst enemies.The 2007 politically motivated violence,killings and displacements of perceived opponents to Ruto's party of choice then is evidence of what would befall any person who would lay obstacles on his path to power.