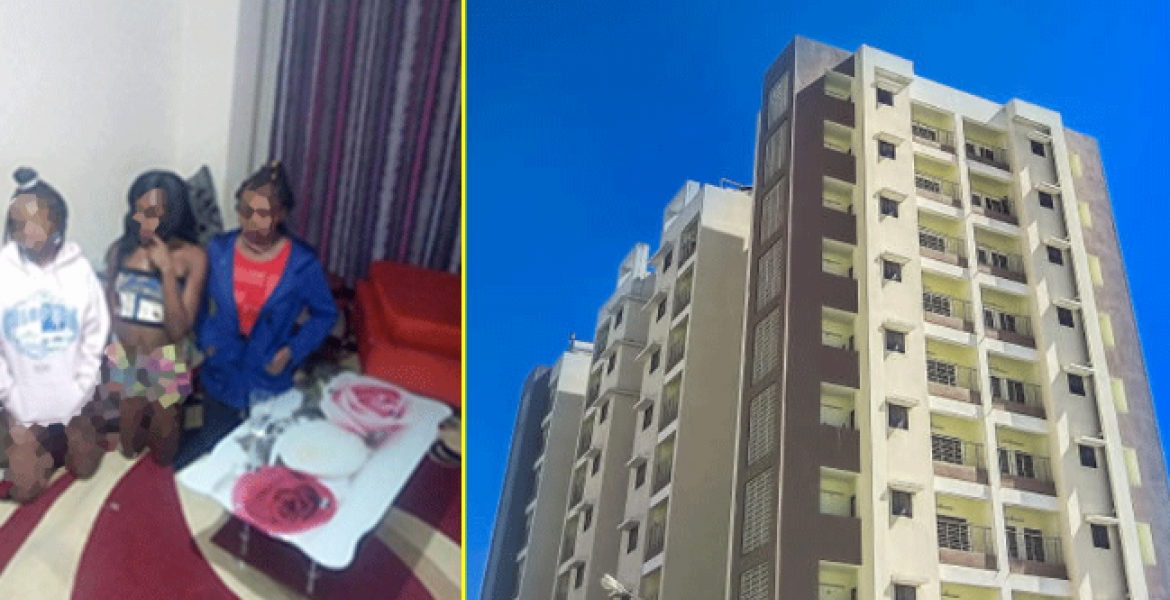 An underage Kenyan girl who had been missing for several weeks was among 10 girls rescued by police from a brothel in Nairobi’s Ruaka estate this week.

The Form Two student at a school in Kiambu County disappeared two months ago and was recruited to the trade by a friend who lured her with the promise of making good money, according to The Standard.

Investigations revealed that the brothel, which has been in operation for the past one year, was owned by a group of prominent personalities, among them a former Cabinet Secretary.

The minor was initially promised she would be earning Sh10,000 every day and her official job title was a masseuse. But her recruiter took her to the apartment in Ruaka where she was introduced to prostitution, initially receiving between Sh5,000 and Sh10,000 a day for her services before the contract was revised and she would earn 25 percent of the payment while 75 percent was pocketed by the operators.

The girl told investigators that during her stay in the brothel, she would entertain about 10 men a day and would sometimes visit her clients’ home for a night of pleasure. The employer would provide transport using a personal car to the client’s place of choice and back to the house located on the seventh floor of the nine-storey building.

Detectives who raided the house recovered sex toys imported illegally into the country and for use in sex parties by minors as well as unused condoms. Officers also found 10 skimpily dressed girls locked in the house with some in bed with clients.

Investigators established that another group of 20 girls had been relocated from the house to a brothel in Mombasa.

Three suspects including a 44-year-old man believed to be the brothel manager were arrested during the operation. They were charged before the Kiambu magistrate’s court, where they denied seven counts of sexual offenses and were released on an Sh1 million cash bail each.

The court was told that on diverse dates between October 19th and November 18th, the three allowed a minor to remain in their house and be abused sexually.

Tell us the name of that former CS.

Exploitation of grand propositions.Would these men recruit their own daughters in this"shameful" business?Especially daughters who are minors?
They say prostitution is the oldest profession,I say its the oldest exploitation. These business is purely based on mens' pleasure.It is a pay for play with only one player-the man.The woman is an object-the ball.
I believe that Sweden punishes men who patronize prostitutes,and set free the women.I agree with that "formula".Even though prostitution is perpetuated mainly by men,women also benefit.So of course women have their own role to play in this sex business.But when you lure young underage girls in the business you are crossing the line.
How much poverty plays arole in this"industry"I will let the social experts respond to this.But surely,a form two girl as vulnerable as she could be, knows what she is getting into when she is promised 10,000 shilling aday.Certainly there are many girls,and women who would politely decline the offer.And of course there are those who will openly jump at the offer.So what do we do? Do we legalize it and control it? That would certainly makes sure that under age girls are not exploited,or recruited
I strongly believe that prostitution would not exist if men used their "Big heads",to reason.I say this because we as asociety pretend to condemn prostitution,and on the other hand let it thrive.I dont understand the dichotomy.If its indeed asocial vice/menace,we cannot be ambivalent about it. We should make a stand to either legalize it,or make it illegal.I understand that its illegal in Kenya,but from what we observe,it might as well be legal.
And you parents and teachers, please teach your children not to accept money for sex.As much as it is tempting to get 10,000 shilling aday,your dignity is worth more than that.
And for you men who engage in this business shame on you.If its about sex, society has designed proper ways to engage in it This straying causes alot of social problems...My2 cents.

crimes and crimes all over the place and the president is MIA! This is serious! The economy is in free fall and such young girls have been reduced to this!

Pinnacle of evil. So much evil happening in Kenya. Culprits no longer pay for their evil deeds.

Rashid Echesa should be castrated. He is the owner

@Sura mbaya, Rashid Echesa should be behind bars. This is not his first time the other time he was importing young Indian/Napal girls for his prostitution business.

This is so sickening. So the perverts are out on a 1 million cash bail (kes 100k if they post 10%)? They should be rotting in prison. These girls are eternally damaged. I cry for them and their parents.