I Don’t Understand Why Kenyans are Broke, Uhuru Says 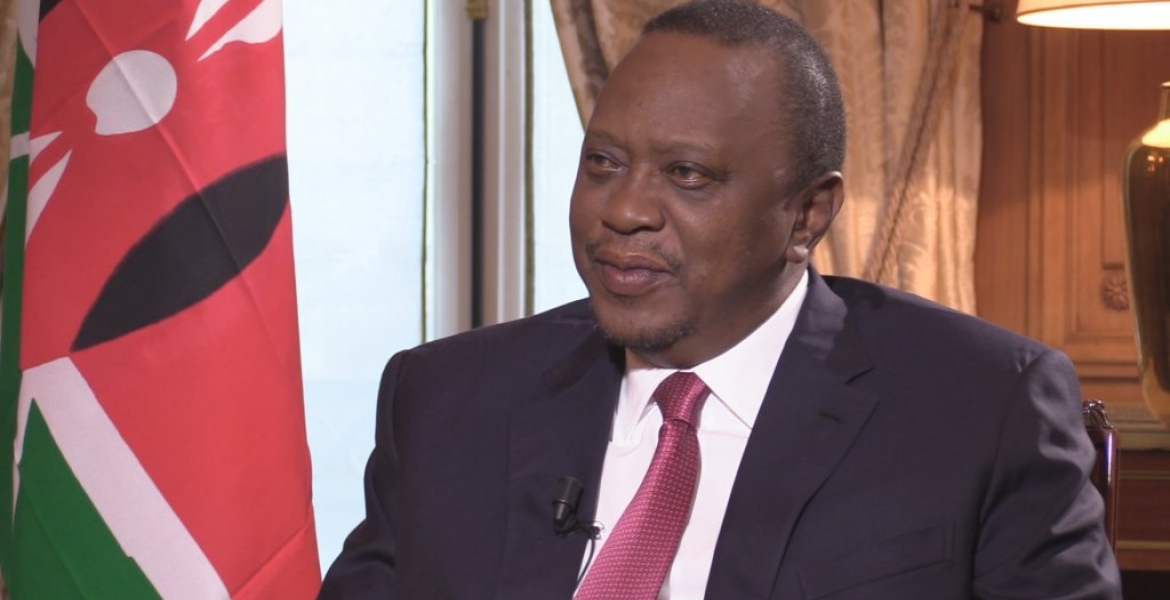 President Kenyatta is reported to have put his advisors to task to explain why Kenyans are experiencing hard economic times.

During a recent meeting at State House, Kenyatta said he could not understand why Kenyans are broke, according to People Daily.

Quoting a senior government official who attended the said meeting whose agenda was to address the current crisis of low cash circulation in the economy, Uhuru indicated the economy ought to be doing better owing to the many infrastructure projects his administration is undertaking.

“The President wondered where all the money being used to construct government projects is going. In fact, he specifically asked us the question: Why are people broke; why is it that there is no money in their pockets?” the official reported to be a parastatal head was quoted by the publication.

An order for parastatal heads to immediately release Sh34 billion in outstanding bills owed to suppliers were among resolutions passed in the meeting. They hope the money will help revamp the economy and create more cash flows in the country.

Kenyatta also banned government corporations from investing in Treasury bills where at least Sh100 billion of public funds are said to have been pumped.

Treasury Bills (T-Bill) are a form of investment where an investor gives a short term loan to the government, usually with a maturity date of fewer than 12 months.

Because most Kenyans have never Inherited lots of Money and Large tracts of Land from their fathers. And should I mention Hefty paying presidency in midst of very poor Kenyans taxpayers (Kiambu's Gatundu in particular)?

He is just wondering where the money he did not steal go?

The problem of circulation of government funds is that the keys have for a long term been corruption.Uhuru removed the keys from the players and they got stuck! How do they pay without getting a kickback?

part of the money is in the hands of Al shabab and criminal gangs all over kenya.

Or where do you think Al shabab gets its money?

Al shabaab made the bulk of their money through piracy. That piracy money ended up in Kenya. Kenyan politicians deep state mutha*****s welcomed them with open arms. Squandered their money then now are trying to kick them out in the name of terrorism. On this one, we cannot dare point a finger outwards. The rot is in Kenya. Hapo hapo kati kati, karibu na Nairobi.

Let them eat cake. So said Marie-Antoinette to the starving masses that could not afford bread. This is for real and that is our president.

DUH! How would he know given his family ties to stolen lands, money and alcoholism??? No surprise Kenyans; Suck up to it, he is your President!!

It’s the international community that needs to accept the man is not the brightest bulb in the room.

Mr. President,I don't know whether you watch world news & wondered what is triggering revolutions? The Sudan, among other things held a revolution after the price of bread was hiked! In Lebanon, they couldn't stand corruption any more! Do you now see where we're headed to?

In conclusion, the Americans and their allies finally won the fight against terrorism using basic stupidity as their weapon.

Mr. President,I don't know whether you watch world news & wondered what is triggering revolutions? The Sudan, among other things held a revolution after the price of bread was hiked! In Lebanon, they couldn't stand corruption any more! Do you now see where we're headed to?

The man does not even understand the job of a president.

You want him to understand a revolution??

He is just a local thief and a killer.

When he says “Mnataka nifanye nini” , he really does not understand what everyone wants him to do.

He’s not pretending. He’s an idiot.

The biggest REDFLAG Kenyans failed to see is when Uhuruto were in ICC. They managed to run a country while on trial for war crimes who does that???? They should be with the likes of Charles Taylor in prison. Uhurutos attitude after the Hague was loot everything, suck it dry. Uhuru can say anything after all what will Kenyans do Absolutely NOTHING!! Kenyans just love the idea of corruption free but will quickly endorse the super corrupt election time.

In anutshell,Mr. President,Kenyans are broke because they import pretty much every thing they consume.And those with money take it out of the country... starting with your overpaid Mpigs.

Hon.President there are a number of indicators in macro economics that show the extent of the reach of money to the general population. Big projects is not one of them unless the materials and labor are obtained from the locals.But when substantial labor is imported from the China there will be no impact on the economy.ufukara utaendelea kuongezeka.Job creation projects especially on the long term will keep money in peoples pockets.

1. We are getting THIRD HAND INFORMATION
because the reporter wasn't even in the room. So in essence, you're responding to ghosts in the air because Uhuru wa Muigai doesn't Give two shits!

2. Kenyans are idiots, (for electing an idiot) the earlier we accept this fact, the better it is to mobe forward in a road to recovery.

3. Kenyans are soft (aka pussies, aka kanyau nyau) we make it so easy for looters and murderers to live large in our society. The same people who suck out people's blood and sweat and rob from Kenyans future, we put them on a pedestal and literally worship them. How about having laws that make it SO EFFING DIFFICULT FOR A RICH MAN ( CORRUPT RICH) TO STAY IN A POOR COUNTRY. How about we DO NOT accept their business, how about we name and shame them, how about we do not elect him/her and his children to public office. Revolution is far fetched! The looters have made sure that all that stolen money is distributed even to the supposedly squeaky clean. It's like poop and the looters have smeared it all over the place on everyone so you can't even tell where the smell originally emanates from. You can't even have a concise discussion about corruption with a voter in Kenya without fearing for your life. You will never see any protests because those who can speak are good. Their bank accounts are fat and they think their future is secured. So who cares about the common mwananchi? Well, soft Kenyans will tell you - not them!

At this rate tuweke Waiguru akuwe president. At least money will appear from nowhere atuambie ni ya chama.

We are just tired of Uhuru

How aloof can the president be? Infrastructure projects get inputs from China tax free and the payouts are repatriated to China and yet we are left with debt. I know Kenyans who supplied govt but 3 years without payment for legitimate work done, they are at the mercy of auctioneers. Tea farmers are not breaking even. Coffee farmers, sugar farmers, maize farmers etc are on death bed

DEAR Uhuru Kenyatta, HERE ARE 7 REASONS WHY KENYANS ARE “Broke”

1. Numerous Corruption Cases within the Government

Since President Uhuru took over, there have been numerous corruption cases within the government, with public funds being looted.
As of March 2019, corruption scandals within the government had amounted to a total of 6,652,459,800,000 shillings since 2013 under President Uhuru’s governance.
None of the accused persons involved in these cases has ever been prosecuted and most cases, however highly publicized, have not resulted in prosecution.

The government has on numerous occasions been accused of trying to kill SMEs in Kenya due to harsh operating conditions, especially when it comes to taxation on these businesses.
Taxes that SMEs are currently paying in Kenya include Value Added Tax (VAT), Presumptive tax, Income tax, all these from the mere earnings that SMEs get from operating.

3. No jobs for the youth

Health care in Kenya has failed Kenyans. The government offers poor services and facilities in most hospitals are not up to par with standards.
Earlier this year, Kenya’s healthcare industry recorded a total Net Promoter Score (NPS) of -5 the first three months of 2019 marking a consistent trend with three months to December 2018.
With this, most patients prefer to seek medical care from private institutions and from overseas hospitals.
Read Also: Healthcare Industry Failing Kenyans, Customer Experience Score Still at -5

The current Parliament we have has failed all of us Kenyans since it seems that MPs are only after their own interests and not those of the people.
For one they failed to overturn Uhuru’s memo on repealing the interest rate cap, leaving Kenyans at the mercy of banks in setting interest on loans.
Another reason why the current parliament has failed Kenyans is that they are only concerned about increasing their salaries and allowances, knowing very well that this will burden Kenyans with more taxes.

Most of the Cabinet Secretaries and Principal Secretaries in Kenya have proven time after time that they are incompetent and have no clue of what they are doing in office.
Our food is contaminated, water full of poison, schools are hazards waiting to happen, insecurity on the rise, all these under the watch of Uhuru’s government.

The country is in huge debt due to the reckless borrowing that has been going on within the government.
The government has been overborrowing on non-revenue projects such as the SGR, leaving Kenyans with a debt of over 300 billion shillings owed to the Chinese Government.
If you have more reasons to give the president as to why we, as Kenyans, are broke, please leave them in the comments section below.

What were people thinking of voting for this guy. There you go. There's your tano tena. This guy will be the president till he's 70 years old. Kenya is doomed!!!