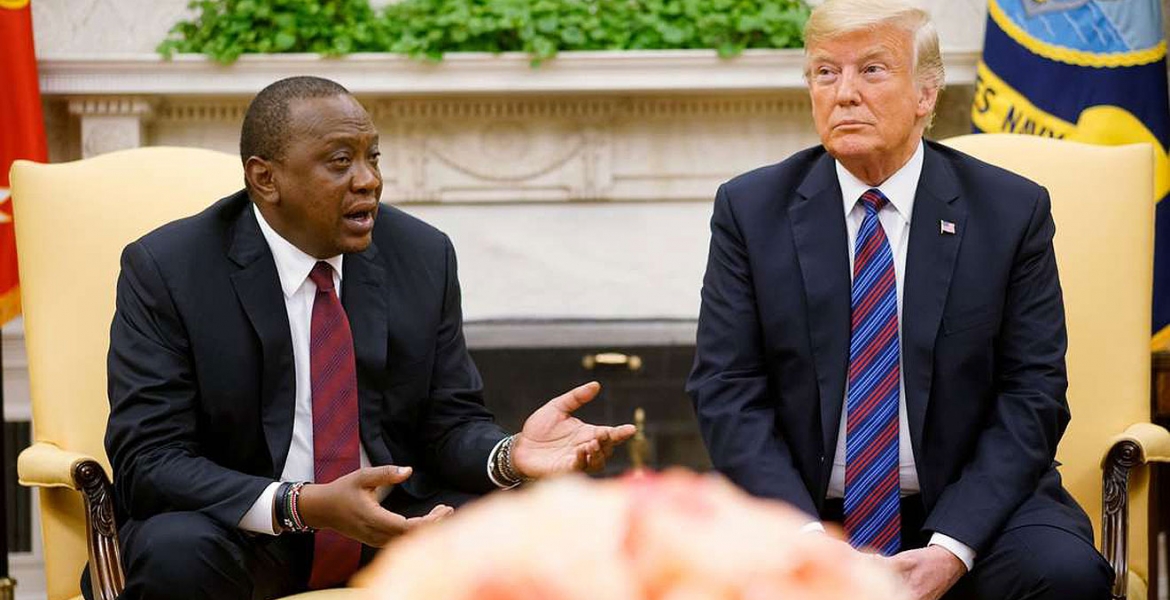 The United States has backed President Kenyatta’s push for an out of court settlement in Kenya’s maritime border dispute with Somalia.

On Tuesday, US Ambassador to Kenya Kyle McCarter said Washington has urged Somalia to drop its case at the International Court of Justice (ICJ) to give room for negotiations between the two countries.

"I’ve been to Mogadishu to speak to the Somalia president [Mohamed Abdullahi Farmajo]. I told him to pull off the court case," McCarter said in an interview with Daily Nation.

He added: "I’ve told them [Farmajo and Kenyatta] that the biggest hurdle is defeating al-Shabaab and that is the only way we can tap the gains on the blue economy."

In his speech during the UN General Assembly in New York last month, Kenyatta called for dialogue over the matter but his Somali counterpart Farmajo insisted on proceeding with the court process.

The case at the Hague-based ICJ was set to commence this November before the court granted Kenya’s request to postpone the hearing. The hearing is now set to begin on June 2020.

At the center of the dispute between Kenya and Somalia is 100,000km2 area in the Indian Ocean reported to be rich in gas and oil deposits.

Hey this area of dispute is in the water,Nobody can farm or leave there.How about saying ,lets go 50/50 on profits,and expenses,plus employment?
Does either of the two countries have evidence of ownership?
The last option that I dont recommend is for the country that strongly believes that it owns that area, to take its military there and protect the area.

KDF does not have stomach for a fight. They spend their time preparing for parades. That is what Museveni said before he siezed Migingo and he was proved correct.

Kenyans support the people of Somali.

Hey @ siad barre lay off what you are smoking.Iam sure its not miraa.Sober up and tell your somali brothers and sisters to haul all their wealth from Eastleigh and trasnplant it in Mogadishu,and see if Kikuyus will die from hunger.I might add that on the way out,please make a camel caravan with your refugees holed up at Dadaab camp,and head to your great republic of somaliland.

@ Guest#13, did M7 say that? Wow talk of hitting below the belt.No wonder Migingo is still in dispute despite many believing that it belongs to Kenya.

He said that in a cabinet meeting.

@Maxiley, I saw a map of the disputed area. Both Countries have a legitimate claim, depending on the compass that you are using. We have already discovered Oil in Kenya, and there may be Oil in Somalia, but nobody cares to go there to explore for it. If there is Oil in this disputed area, it is worth much more than farming. The dispute should be amicably resolved, but it is always the Kenyans who don't turn up at meetings, or in negotiations. They regard themselves as too 'Superior' to negotiate with a 'Failed State', the result being Somalia going to the ICJ. It does not matter who the ICJ, or the US sides with. If the issue is not resolved between Kenya and Somalia, it will be like sore, wound, which can begin festering at any moment.

Maxiley, i may not know you but I highly regard your perspective on many issues. But on this one umenoa kabisa - your neighbor doesn’t wake up one day yo decide that 20% of your property is theirs
I really don’t know what Uhuru is talking about - there’s no question, there should be any question about the Kenya border with Somalia. Somalia should go to The Hague alone and Kenya SHOULD never, ever respond or even appear to respond to any claim about this territory by Somalia. And if this war-like tribe y’a Wasomali ikisumbua too much, sheer military force be used all the way to Mogadishu, period!
Positively ZERO NEGOTIATIONS!

Kenya is a member of the UN court and can even withdraw from the court at any time. But judgment will still be delivered with or without it's presence.

Rule in absentia will only give Somalia's case moral authority in the eyes of the world as one side of the case is only heard and Court's precedence favour Somalia. Than what? Kenya can fume like China when it lost its ICJ case against phillipines, build military base, etc. or start negotiation after judgement.

Somalia can then say no, warn foreign oil firms in the area and quietly build itself militarily, making the area Al shabaab playground.

If the Kenyan government does not finance Alshabab then they should account for Eurobond 1,2,3 , NYS 1 &2, SGR looted billions, Afya house looted money, Arron & Kimwerere dam among others.

The Kenya government has been financing Al shabab ,Al qeada and insecurity in Kenya.

The American government should not take everyone for fools.

Where is Al shabab getting its financing and weapons??

I will tell you::
>>>>>It’s getting it from the illegitimate Kenyan government. <<<<That’s why Uhuru Kenyatta ignored the intelligence report he was given about Garissa university and more than 147 students were killed.

The Somali government should know its being used to tame a rogue organization that is being funded by the people in the Kenyan government.

There is no legal grounds for Keynia to claim Somali Marotame by drawing fake line.

Kenya is the only country that looks at Somalia in a brotherly manner. Somalia may never appreciate anything about Kenya but the truth is no other country in the world would do as Kenya does..anyhow.. May God continually keep Kenya and its boundaries!

Dear Eglow. Although you are right when you say no other country in the world would do as Kenya does for Somalians. You my not known but we do appreciate for Kenyan people. For example we invest our money in Kenya more than any other country in the world included our own. Kenya people are great people and we love them very much, but let’s face it. Kenyan government is very corrupt and it harasses our people every day. This corrupt government is what started the dispute. Both Kenyans and Somalians know that there were no dispute til
recently claim by Kenya portion of somalian’s sea. The season is obese Somalian government is weak and corrupt.

Agree with dividing it 50/50 then the Kenyan government closes all the refugee camps that hosts Somalians and chase all of them out of our 254. Enough of these shit of babysitting killers who turn against us once settled. Remember to add big mouthed shiftaa Duale!!!!

Uhuru Kenyatta is a thief.

He is just on his usual stealing spree.

The US government is clearly not making America great. Only a fool supports thieves.

Adolf Hitler loving Trump hates Somalis and Somalia. That alone is enough to rubbish this hand picked mouthpiece. As Trump's watchdog, this ambassador to Kenya has no locus standi commenting on Kenya Somalia disputes. It is USA ambassador to Somalia's job.

Secondly, Somalia is fragile at the moment, though not as very weak when Kenya forced the MOU down the throat of a transitional government that it had set up in Nairobi, as a no block controlling imaginary government. So it is not weak, can fight back with resources from Al shabaab and Arab pals like Turkey, etc.

And Kenya has already refused to negotiate forcing Somalia to go to the UN court, which judges without fear or favour, a non binding humane judgment from where both countries can either negotiate or negate.

Finally, Kenya-Somalia border is very clearly demarcated. We follow straight lines everywhere at the border and at sea the map says it is a straight line, like that with Tanzania. But Kenya wants to have it's cake and eat it differently with both Somalia and Tanzania.

No Somali wants to have Kenya landlocked because vof all the help Kenya gave, even if it is obscured by the cruelty and abuse of Somali refugees. So we need a give take solution. MeI think that it is prudent for Kenya to start treating Somalia and ethnic Somalis with respect, streamroll Somalia's membership in EA Community and request the maritime area to be shared resources.