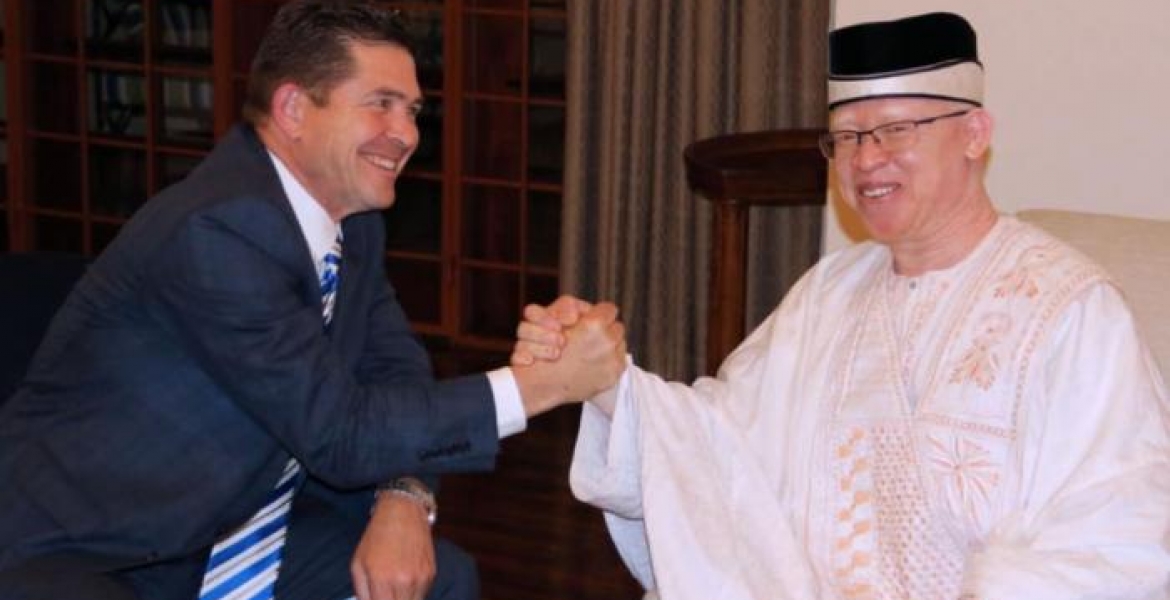 Senator Mwaura delivered a formal complaint against the Secret Service agents in charge of presidential protection to the US Ambassador to Kenya Kyle McCarter on Thursday.

“Delivering a formal protest letter concerning my profiling by the US secret service at the UN General Assembly, to the US ambassador to Kenya Kyle McCarter at his residence yesterday. This is a follow up to a meeting with US congressmen and women on the same,” Mwaura announced on Facebook.

He added: “We must create awareness by standing up to discrimination, no matter who commits this and from which country. We must stand in solidarity to resolve what divides us, for discrimination against anyone is discrimination to each and every one of us. We are one humanity masked by appearances and presentations. When we learn to work together, we can achieve a lot.”

Last month, Senator Mwaura claimed he was profiled by the officers in three separate incidences ‘for being an albino.’ He was part of the Kenyan delegation attending the 74th session of the UN General Assembly in NY.

“I am rushing to attend a Kenyan side event on peace and I am told to step aside and kept waiting for over 30 minutes.

The secret service agents ask for my ID after taking my entry card. I give them my national ID and NHIF cards as proof of identity.

They go like, “The photo is for the same person but the names don’t match”. By now, I had to ask them why they are questioning me. They say there is someone who fits my description walking around with a screwdriver. I am like seriously?!

In the US, people are allowed to own and carry guns, and here we are talking about a screwdriver? I feel profiled and discriminated against on the basis of albinism, racial and regional origin. This cannot be happening at the UN headquarters, the home of the universal bill of rights?

They are embarrassed. I offer to leave but they refuse to let me go. The White men now call a Black guy who helps calm the situation. He takes me to his office in some basement and introduces himself as Eric Bramwell, the lieutenant officer in charge of the Investigative Unit. He offers to escort me to the GA hall but I opt to first get into the Kenyan side event.

I bump into Nairobi Senator Johnson Sakaja, something that seems to give Bramwell validity about my identity. In the side event, I impress upon Foreign Affairs CS Monica Juma on the need for Kenya to take up the role of the AU Special Envoy on albinism, a position that I helped push in Addis Ababa in March.

As I get into the General Assembly Hall, Bramwell, who now refers to me as Senator Dr, pulls me aside. He is with Kevin O Hanlon, the head of security at the UN and who has come to apologize in person.

I leave the matter to rest.  President Uhuru Kenyatta delivers a compelling speech that receives rare applause in comparison to other presidents. He, later on, invites us to a private meeting. Kenya’s Permanent Representative to the UN Lazarus Amayo informs me that he has received an apology from the UN about what had happened.  Later on, at the entrance of the President’s meeting venue, my colleague legislators are ushered in while I get questioned.

The Secret Service takes my card again as others take my photos secretly. As if that is not enough, a Secret Service agent follows us up to the lift looking at me suspiciously. When Uhuru finally comes in, he wonders loudly if I am an al Shabaab mujahedeen or the chairman of the National Riffles Association. I tell him, “Those people really harassed me”.

We let the matter lie.   The following day, as I try to access my hotel, I give my UN card at the checkpoint. I am again told to step aside. Calls are made once again and the whole process begins all over for the third time. I can’t take it anymore.  I remind the secret agent he is a person of color and that I am a senator from Kenya. He rudely asks me if I am a US senator.  I tell him that he isn’t the most important security agent and he should step aside.

I am allowed in after a State House official finds me at the entrance. On my way out, I meet Mutahi Ngunyi and we have a chat. Again, this seems to give the Secret Service my validity. I there thinking, am I not good enough to be believable right? To the Secret Service, I am just ‘an albino with a screwdriver’ and who is a threat to some king.

I tell them that by now, they should have circulated my image for their system to differentiate between their supposed target and me.  At this point, one of them takes a photo of my entry card. I later got an apology from the US ambassador to Kenya Kyle McCarter, but I notice it had been sent before the third incident. Western movies cast us as pale white-skinned villains with red eyes, endowed with potent supernatural powers. In the sub-conscience of the secret agents, I am a caricature of such a villain!”

That letter will be shredded along with other junk mail at the US Embassy. Quit wasting your time and effort.

acha utoto.. make kenya great and you will be respected

@maumauagain, TOTALLY AGREE! nobody respects corruption, no matter how much you steal you will always be a thief. Im glad it happened to show these fools corruption doesn't buy any favors outside there country they have messed up. pumbavu yeye.

This joy-rider should not be given visa in the first place. They are wasting tax-payers money with useless joyrides. How did Kenya benefit from Mwaura going to UN meeting. 2nd when did Kenya kitamburisho & NHIF card became a form of identification in USA? Wacha ujinga Mwaura.

A black white man is suspicious in U.S eyes.lol

I have read all his complaints here. I don't think that he was mistreated by anyone. By his own admission, he did not have the required documents. If he doesn't have proper documentation, he should not expect special treatment. It is the law in the US, and no one is above it here. This is not Kenya.

Dude needs to get over himself. However on behalf of all those who don't give a s**t, I would like to extend my sincerely insincere apologies that Senator Mwaura's delusions of grandeur were so badly out of sync with reality. I won't, but as I said, I'd like to. In time he might understand that in Kenya he might be the windshield but here, he is the bug.

Mr.Mwaura, blacks in America have been complaining and sending those letters for 400 years. Nothing changed. Change will come from within not without.
Kenyans and Africans need to ignore everything and use their energy to build their families, societies and countries. Not copying or worrying about who is who. The only way someone is superior, is only if they make you feel inferior. The so called "whites" use alot of energy and resources to make the black man feel inferior. If we ignore their world and build ours, we will be all equal or we will build a better world. They are only superior as far as their gift- the sword (gun) is concerned.
Let us build families,communities and countries.