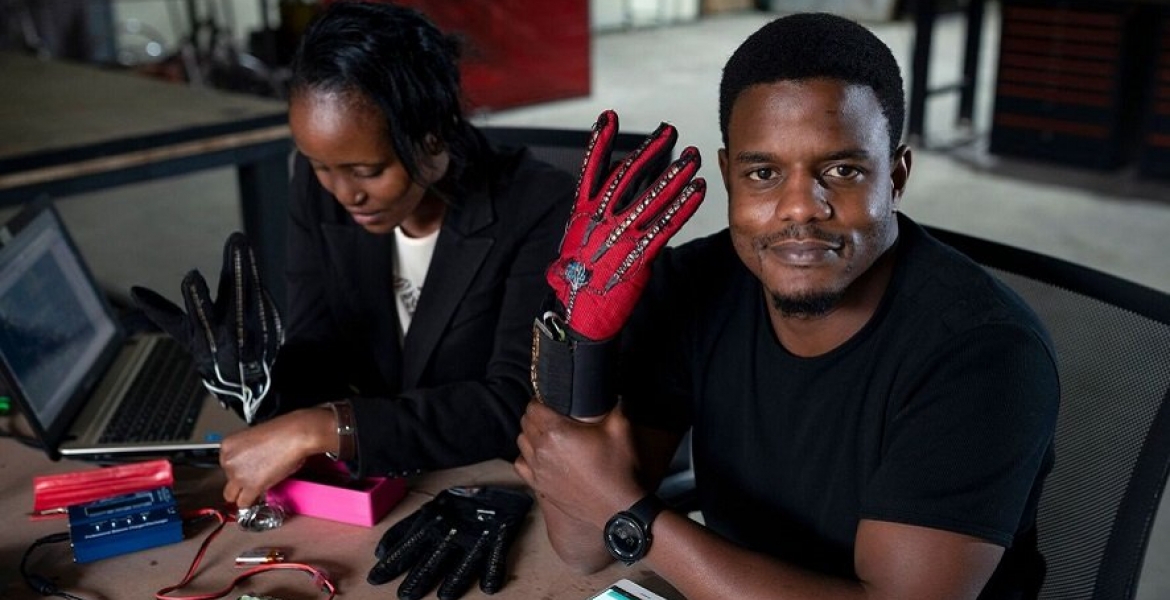 A 25-year-old Kenyan man has earned global recognition after he invented smart hand gloves that are able to convert sign language movements into audio speech.

Roy Allela, a technology evangelist, says the need to communicate with his 6-year-old niece, who was born deaf, inspired him to build the technology.

The smart gloves – dubbed Sign-IO – have flex sensors that are placed on each finger and have the capacity to quantify the bend of a finger and process the letter being signed.

Using Bluetooth, the gloves are connected to a mobile application, that Allela also developed, which then converts the sign into audio speech.

“My niece wears the gloves, pairs them to her phone or mine, then starts signing and I’m able to understand what she’s saying,” says Allela.

Allela says the speed in which the signs are vocalized is one of the most important aspects of the smart gloves.

“People speak at different speeds and it’s the same with people who sign: some are really fast, others are slow, so we integrated that into the mobile application so that it’s comfortable for anyone to use it,” he notes.

Through the app, users are able to set the language, gender, and pitch of the audio voice, with accuracy results averaging 93 percent. The gloves are packaged in different styles depending on the users' preference including a princess glove or a Spider-Man one.

“It fights the stigma associated with being deaf and having a speech impediment. If the gloves look cool, every kid will want to know why you have them on,” says Allela.

Allela says he is using the prize money from the award to make more accurate vocal predictions.

congratulations to you Mr. Allela. This is the kind of innovations that will erase the stigma attached to being black or african. And that is we are just brauns and no brains. When we start to innovate,and get international/global recognition,and our black faces are behind the innovations, the world will start looking at watu weusi differently.Much like we excel in sports.
Yes we show the world we are equals by matching same standards,and that is competing on the same level with equally impressive results.
Some of you may have heard that students of Asian descent excel in standardized tests,and that has created a stigma which they resent.Especially those who dont match this excellence.
Would it not be nice if we go that kind of stigma.
Keep up the good work Mr. Allela. I hope our own government recognizes your achievement,and do something to encourage the likes of you.

@Maxiley, black people have been inventors for centuries. The following is just an example and bear in mind most of the inventions have not been documented and a lot were falsely claimed or stolen by the white people. During slavery for example, inventions by slaves went to the slave owners credit.We know who the biggest thieves in this world is. Black people have nothing to prove but to claim what has been stolen and still being stolen from them and it runs into gazillions or jillions of dollars not KES.
https://youtu.be/gQo1cZtEpgY

@ Mugikuyu, thanks for your incite. Yes Iam aware of some of the inventions black people have invented.Unfortunately,they have been overshadowed.
Fast foward to today,and you will find out that black people do not appear much in scientific magazines,or win nobel prizes, in maths, economics, medicine,(sciences) Even in scholastic tests like SAT,blacks are hardly on top. What do you attribute this dismal results,or out come to?
If their achievements are being covered up, then lets uncover them.
All in all, my point is that,if people who deem blacks as"Not smart" start seeing black faces on inventions,their perspective might start to change, if they are open minded.

When we stop looking towards the West for awards and accorlades and start embracing our own talent, I believe we will be amazed. Yes we have talent and we need to support it soon as we recognize it. We can not waste our energy trying to proof to others how smart we are. One has to be dumb to assume a whole race is dumb and we have no time for that. Now this guy below is simply amazing and has done impressive work.
https://youtu.be/PKD_YRJylXk

# Mugikuyu, I respectfully disagree that we look towards West for accorlades.This is a global issue,or human issues Iam talking about.The world has become a global village.Within ashort time we can know what is happening 10000 miles a way.
In athletics, Kenya does very well,and receives praises from all over the world. It is with this that I have in mind that if we do well in innovations, we shall enjoy the same world respect...

Nice. But not "invented by" him, this has been done numerous times, and the ASL community apparently does not think much of them.
https://www.theatlantic.com/technology/archive/2017/11/why-sign-languag…

@ Steven Roussos, I believe Mr. Allela is a ware of the history behind this technology. My take here if true, is amazing that it has a 93% accuracy.That should impress those in the field.
True, the article you presented offers dismal success.But I am Impressed by this young man's drive to help his relative,strongly confirming the proverb " necessity is the mother of invention"

Hongera sana ndugu. Patent your glove so that a crook from the west will not steal your innovation.

Way to go Allela! do us proud in that front using science and technology to solve real-world problems.

A big step forward. Until now, we had only managed to invent mkokoteni. Looks like the days when we were only known for dancing, singing, drumming and running are finally coming to an end. It's very sad that while the rest of the world have gone to the moon and back, we are still waiting to go to heaven.

It would be a mile stone,in Kenyan inventions,if we now put an engine on that mkokoteni,in stead of man using githeri, uji and ugali to power it.

you are one of the fools that believe in moon landing, those books were written by wacolony and u took the biggest bite of fools knowledge!