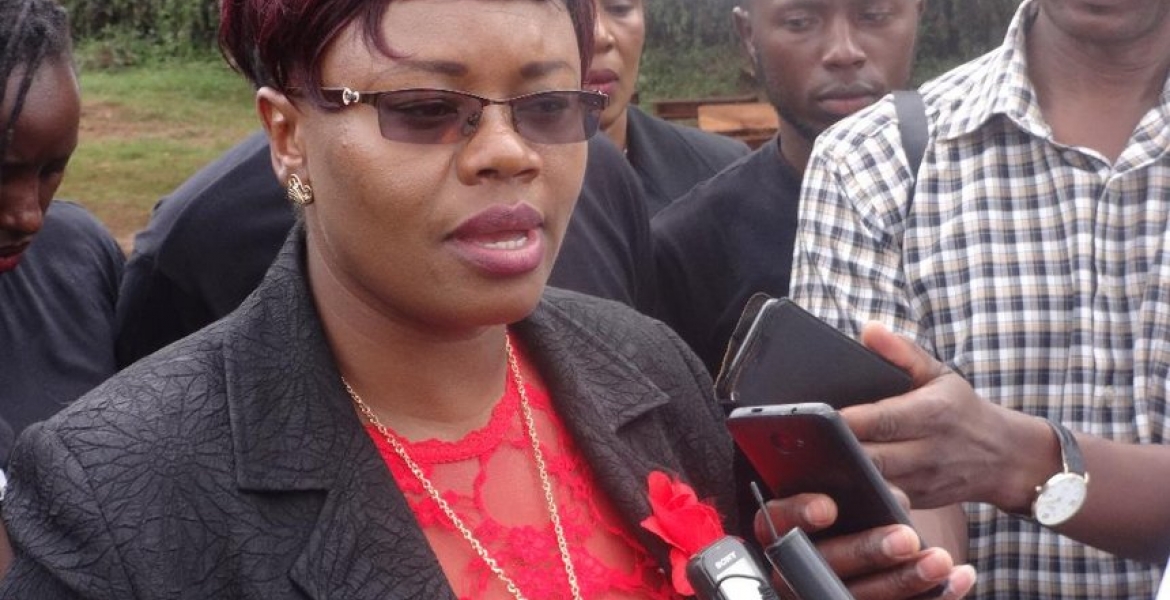 Wamuchomba, who was reacting to Kuria's claims that President Kenyatta has neglected Kiambu and turned residents into voting machines, says Kuria should be taken to an alcohol rehabilitation facility.

While dismissing Kuria's claims, Wamuchomba says the MP disrespected the President by addressing him while under the influence of alcohol.

"Am helping drunkards in Kiambu and am calling upon Hon Moses Kuria who recently addressed the President of the Republic of Kenya while visibly drunk to apologize to the nation. I also call upon him to come to our center where our doctors will treat him for seven days so that he can regain his senses," says Gathoni.

Speaking on New Year's Eve at Thika Stadium, a seemingly tipsy Kuria criticized President Uhuru accusing him of going to Kiambu to issue certificates to rehabilitated addicts instead of launching projects as he does in other regions.

“How could Kuria say that Uhuru should wacha ujinga, he should feel ashamed, if you feel that the president has failed in one way, at least use decorum and protocol to pass the message,” Kabogo says.

Another Jubilee drunkard at the top.

I used to have some respect for this Wamuchomba lady but that has eroded fast. The first day she got to parliament she called for increased MP salaries. The other day she told women to consider being second or third wives. Now she is attacking Kuria in the media. From Kuria since he does not shut up, we will learn the truth about her. Let the drama continue. women rep seats should be done away with. These women should be empowering other women and protecting children. Wamuchomba, Uhuru can protect himself, go protect the helpless.

@ Wamuchomba. Why are you telling us what we already know? Why is it your concern that Kuria gets sloshed? Is it because his sentiments were directed at the president, and because you didn’t like them, you deliver a blow below his (Kuria’s) belt? Can’t the president defend himself, or is it that he needs “dogs of war” to do his dirty bidding? You were elected on a promise to deliver for the youth and women, not splash your political disagreements on media with the equally brash Kuria. Style up; I presume you probably have a slightly better head on your neck than Kuria, so I give you benefit of doubt. But your antics since you got elected don’t leave me with much hope or confidence…

What kind of Mpig's and representatives did we elect? From every corner all Kenyans deal with is gossip. MP this, MP that. When are these MP's ever going to discuss real issues affecting their constituencies. It's all about their salaries, travel allowances, their health insurance, not the public's and their gossips. It's time the common mwananchi start holding MP's accountable for how they use time that the public is paying for. How much time is spent doing what they were voted to do compared to how much time is wasted gossiping. God give Kenya leaders not politicians. God help Kenya!!

Opportunists! we all know what Kuria said is what your constituents are saying behind the facade that central leaders have put up around the presidency. Only a few including Moses who has the guts or the moral innocence to tell off the emperor's invisible clothes. “But he has nothing on at all,” said a little child at last in the Emperor's new clothes tale. This is not the time to tow the line behind your man, this is the time to build bridges beyond your man. This is time to build strategies not to patch-up weaknesses.
A quick example, before the handshake it was only Kuria who could face off with Baba and still seat with him over a meal! Go figure. Its better a honest drunkard than a multitude of sober Pharisees. Drunk or not the message is home.

Kuria is using uncouth language because he knows that the president will brush it off as nonsense.He also knows that nothing will happen to him;not that it should.But I hardly doubt that he could have addressed our first president Kenyatta the same way for fear of languishing ,and eating half cooked food at kamiti.
Iwould like to know how Mr.Kuria believes that his people have been turned into voting machines.Knowing what machines are controlled by people,and cannnot think by themselves,I would be insulted by that reference,if I were in his constituency.There is aprocess to constructing these projects he talks of.Uhuru cannot just arbitrary,and unilaterally decide to direct earth movers to kiambu to clear ground for construction.Unless ofcourse he is coughing the cash from his pocket.
Since devolution, governors have the mandate to what projects should be laid out in their county.Kuria should start from there.

But it is true....kiambu Certificates for rehabilitated people...Tell me where in entire kiambu county we have good roads.
Mr. president you are president to all Kenyans!!

I said long time ago that boy in statehouse has no balls. He is always depending on women to rescue him. His mother, his wife the MCA ...

I am in love with this lady and am willing to make her my number 2 and not mpango wa kando. I understand if her current man is kikuyu he must be an amateur drunkard with some sort of erection dysfunction , Gathoni, my user name is Wamjomba please , please be my valentine - Amen

I am in love with this lady and am willing to make her my number 2 and not mpango wa kando. I understand if her current man is kikuyu he must be an amateur drunkard with some sort of erection dysfunction , Gathoni, my user name is Wamjomba please , please be my valentine - Amen

What does she get in return for being your # two wife? Other than being ranked better than number 4