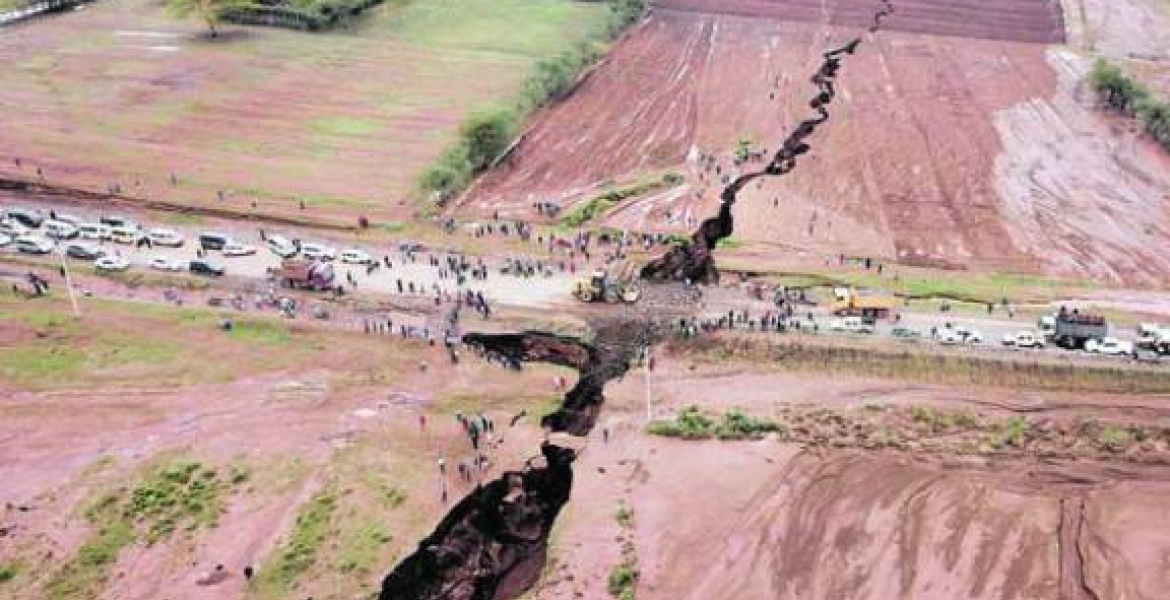 A section of Rift Valley is slowly splitting in what geologists say is as a result of massive earth movements, coming after deep fissures occurred in Narok County.

Over the past two weeks, a tear of up to 50 meters deep and 20 meters wide occurred along the Mai-Mahiu-Narok highway, rendering the road impassable.

Geologists say that Kenya, Somali, Tanzania and half of Ethiopia could separate from the African continent to form a new continent dubbed the Somali Plate in the next 50 million years.

The Great Rift Valley runs from the Horn of Africa-Somalia all the way to south of the continent in Mozambique.

Speaking to Daily Nation, Geologist David Adede said: “The valley has a history of tectonic and volcanic activities."

“Whereas the rift has remained tectonically inactive in the recent past, there could be movements deep within the Earth’s crust that have resulted in zones of weakness extending all the way to the surface,” he said.

Adede added: “You cannot stop a geological process because it occurs from deep within the crust of the Earth.”

The fissure in Suswa area has so far displaced several families after it ran through their compounds.

One of the victim, 72-year-old Mary Wambui said “staying here is like courting death”. She said her family was taking dinner last Monday when the earth suddenly cracked beneath their feet, splitting their home into two.

Iam curios as to whether geologists saw it coming.Does mankind have such detector?
In 50 million years we should all have moved to other friendly planets,or made the unfriendly ones friendly. Look forward to with great anticipation...

50 years maybe.. stop scaring us that was a sign People president ajukue pande moja and Uhuru ingine..Kenya one and Nairobi..states..I guess Maombi ya Wakenya imesikika

Mother nature has created a tourist attraction and fake news of how 500 millions years to come there will be two Africa continents.

Anyone who had the previlege of loitering & doing some growing up in the streets of Nakuru as a young'n knows there is a bigly fault line that passes thru London estate, down thru the Total roundabout on Nku-Kisumu highway.. One day in the late 80s or early 90's there was heavy rains and the githeri & thufu canteen on the roundabout got swallowed by mother earth. The fault line goes thru Shabeh /kwaronda/kaptembwa border and to those sides of Mau Narok.
We've always knew this could happen just by loitering and having good knowledge of our backyard.

Sheit!!! This story's making me feel as old as prostitution!! From today My old a$$ is gonna need metamusial to go no.2.

A blessing in disguise.

Finally David Ndii's dream to secede is coming true!!Mungu halali. Be careful what you wish for. @Joho, Mombasa might sink like the famous Atlantis ngojeni tu.

50 million years?
Puleeeese.. You scared me to hell. Thought it was gonna happen tomorrow.

But hey, SOMALI PLATE? What a funny name.
And you've named it already,,, then wait for 50 million years, ama?

We have to rethink that PLATE name.

See, I have always warned Kenyans about these unending political wrangles ....see where they’ve brought us. This is Raila’s fault, plus the entire opposition. Plus a Kichwa Ngumu Jubilee government. Haya basi, ndo sisi haao, tumeisha!

we need to revist that name.. lol

I cannot deny such allegations... Tectonic plates and motions in the earth crust occur. I also have a thought I can result to further formation of rift or other vertical cliffs

Geologists you guys can scare the hell out of us.You say it will take place 50 million years ago?Yet you did not warned us or the government for a preliminary measure. Ata nyinyi hamkujua!!!!