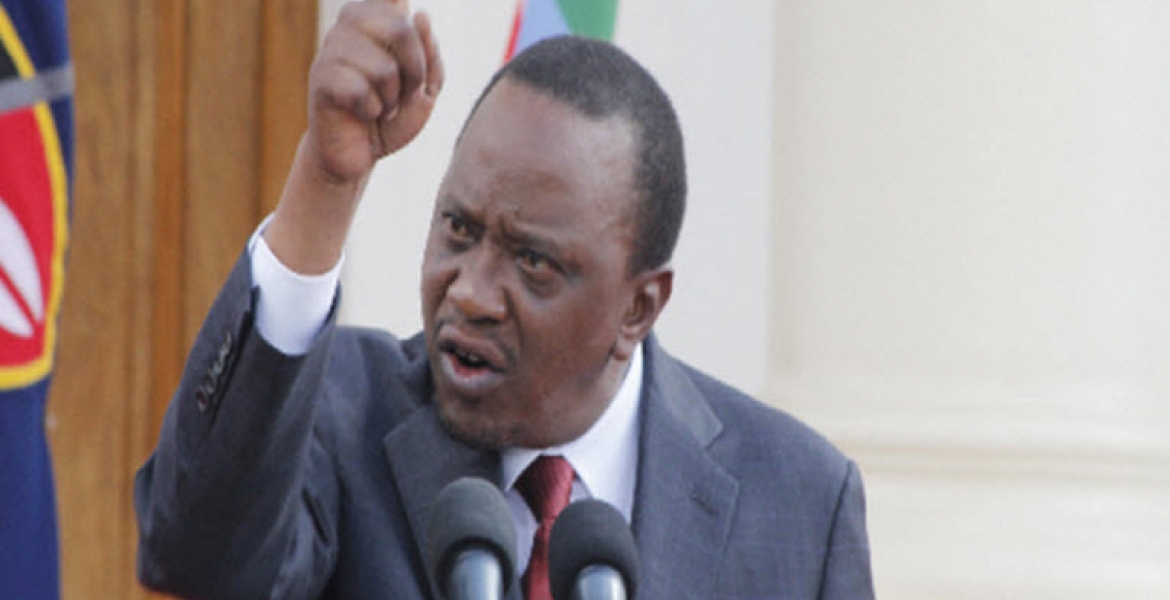 President Kenyatta on Thursday issued a stern warning to those calling for secession of some parts of the country, noting that his administration will jealously guard Kenya's territorial integrity.

Speaking at the Diani Reef Hotel in Kwale County when he officially opened an induction meeting for governors and deputy governors, the head of state stated that all leaders must endeavor to unite the country regardless of their political inclination.

“We will and shall not entertain any language or any action that either threatens the territorial integrity of our nation or that threatens life and property,” warned Kenyatta.

He continued: “Those who wish to operate outside that order can expect nothing else than to be dealt with firmly.”

The President, who was flanked by former Ghanaian President John Mahama, said he was ready to work with all governors irrespective of their political affiliation.

"I extend hand of friendship and partnership to all."

Way to go Prezo! Undivided attention to development and the welfare of all kenyans. Also be quick to embrace people of Kisumu, Bondo,Siaya,Homabay,Migoli and all those NASA supporters who feel slighted. Remind them that they're our brothers and sisters too. Visit all those areas and continue with substantial development for all.

Uhuru and his warnings!!!! Spare us this mediocre BS. Most kenyans chose peace so we can move forward as a country. We all know what to expect over the next 4 years. This nyangau I swear!!!

You need to get tough Mr. President. We cannot have foreigners dictating our destiny. Joho, for instance, is an illegal immigrant from South Yemen. He should keep his mouth shut up

He is also a crook. Iam surprised that he is still running around yapping his gums.Is this intended to deflect attention from his forged certificates...

He is probably Al- Shabab. More Needs to be done to establish his roots and DNA.

A Blatant THIEF Warning his Victims. Let them "Move On" as you said Earlier. Let them Move On!!!

I have advised you many times to seek counsel from the only wise and capable president Kenya has ever had (Mwai Kibaki), but you seem to be getting advice from the wrong sources. The people of Kenya can see what you are doing on a daily basis. Don't take us for granted! This is not 1963 when more than half of the people of Kenya were illiterate. This is 2017!

What are you going to do when the people demand fair representation.They want to secede because they feel left out.Forcing talks of secession to quiet down is a mute point.The country is divided because certain communities were cheated mistreated and even killed during the élections. To date their issues have not been addressed therefore do not expect them to roll over and play dead simply because you said so.Resistance movement continues

@imara, in 1963 Kenyans were more enlightened than today. Those days we never used to worship some self-made godman. We only worshiped one God. Those good old days, when you lost an election, you conceaded graciously. You did not vow to dismantle or go down with the whole country. I think we were more learned then than now.

@ Imara, get a hold of yourself, are this the so called enlightened Kenyans you are talking about. https://www.youtube.com/watch?v=etbq2qxAEt0

I believe Mama Idah has sopen on this issue, she is clear she does not want to be a Fake 1st Lady...

I believe Mama Idah has spoken on this issue, she does not want to be a Fake 1st Lady...

This guy is noteven ashamed of being in power by stealing election from Raila Odinga,Ngai how can he chest thumb yet the whole world knows that he is an Illigimate president.Uhuru needs to be quite knowing that he was only voted in by only aquater of Kenyans Kikuyus his tribesmen and the kalenjin.He needs to stop threatening Kenyans, he is athief.He needs to start prosecuting people who looted public funds like his mistress Ann Waiguru who stole NYS money.He is only ruling a small section of Kenya.What happened in kasarami on jamuhuri day proves his illegitimacy.He needs to go to Stephan for his alcoholism and drag abuse.Ngai Ngai how can you sleep over stolen election how?

@Njai, agree we have gone backward. Could you imagine your guka speaking like this?
watch: https://www.youtube.com/watch?v=YBaRiRCMPMk

Uhuru Kenyatta go tell your Boss, secession is always an option and if he doesn't like it he can go hang.

Its clear, Uhuru Kenyatta is a puppet.

For sure NOT MY PRESIDENT.