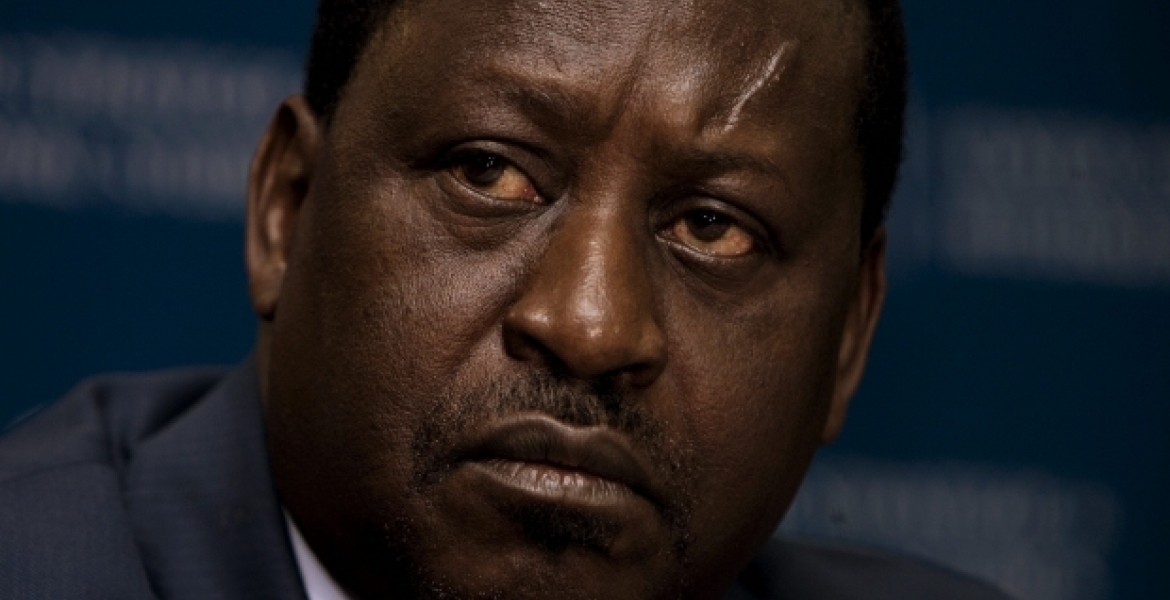 National Super Alliance (NASA) leader Raila Odinga has spoken about the secession debate that has been suggested by a number of Kenyans led by Nasa chief strategist, economist David Ndii.

The former Prime Minister said that he personally does not support the idea of splitting Kenya into two, but, however, noted that those raising the idea have justified concerns as a result of what he described as “successive ethnic discrimination” since independence.

Speaking in an interview with The Financial Times, the Orange Democratic Movement (ODM) party leader said that he was of the idea of working to ensure Kenya remains united.

“We believe in a united Kenya. We do not support secession, but you have seen the disintegration of countries in eastern Europe. This debate about self-determination is gaining currency as a result of mis-governance,” Raila told FT.

“The debate about self-determination is gaining currency. When people become desperate they resort to desperate measures,” He added.

The separation debate was started by Ndii, a key aide of Raila following the nullification of August 8th vote by the Supreme Court, where President Uhuru had been declared the winner.

“People feel they have been completely disenfranchised. But we’re clearly in a political environment that could start hurtling downhill and it could go in any direction,” Mr Ndii said.

“It is a subject of intense debate. You have demonstrators walking around with flags saying ‘People’s Republic of Kenya’,” Githongo said.

“As a debate, I can categorically say this has legs.”

Those who expect to get everything, including leadership, on a golden-platter are weak, lazy and spoilt brats who have grown up with a silver spoon in their mouths. That is not how life goes... Tantrums when one does not get what they want is only juvenile! Watch out for self-seekers!

Its too much tribal hate in Current Kenya.For example:
Kikuyu's hate Luo's.
So, its better to get a divorce than to force a marriage that is abusive.
No need of giving all this trauma to the rest of us.

I am in with love Nyako Doreen.I wish she was my wife.

Lets say secession was successful and Raila becomes the president of people's republic.A culture is created where for the next 50 yrs the president will always comes from western,then the coast will be like this relationship is abusive lets divorce.The Peoples's republic slpits again.I feel we need equality in kenya but secession ain't the solution.From the faces looks okay but have sit and think about.To start with,it will not be peace and people will die..I could die or you could die for no reason

We know it is your idea. People are dicriminated only because one greedy fellow Raila cannot win enough votes to become president. Kenya must be dismantled just because of one fool. We shall see how far you can go. We have devolution now but when resources are distributed you collect your cut from the governors in your areas. Just go round the country and see how other areas are developing. No gov. can win u our areas hnless the bribe you. Luckily y ou lead a bunch of fools who can't see what is going on.

It should not be dismantled because of one fool. Did you add yourself to the list of fools. When you say WE, who is we? You are naive to post that there is one greedy person in Kenya. Which Kenya do you live in? Let me ask you a question: Do you know what SGR stands for? Do you know all these big projects are loaded with fake numbers, billions of shillings because of greed? Do you think that that SGR project cost that much in billions? Old cars that were painted or just refurbished. Don't assume all people are fools, talk for yourself

How marginalized are Luo's when they are all over the Kenyan Judiciary? The only Luo I know for sure is 'marginalized' is Raila because he cannot get what he wants. As for Githongo and Ndii, they are among some Kikuyus with the best education money can buy... How marginalized are they again? Finally, will they be adopted by Raila's Republic of Kenya. This election business has seen so much drama, but it is good that Raila has finally put his final card on the table and Kenyans (Central Kenyans, Lake Kenyans etc) can deal with it. But I say a man in his twilight years should not ruin the country for younger generations. My two cents.

VIVA PEOLE'S REPUBLIC OF KENYA..SELF DETERMINATION! WE WILL NOT BE RULED BY TWO TRIBES FOR EVER THROUGH RIGGING

Juvenile talk. He sounds like my seven years old boy when he does not get his way. I have been warning folks about the end game of Raila and company. Make Kenya ungovernable. He is half way there. Make endless demands everyday until the country can not take any more and thereby give you the presidency in desperation." I will be the president by any means necessary" This is Raila's motto!!! He has already declared that no election will be held on October 26th. Raila's decree. Are you kidding. I thought Uhuru was the president. Are there two parallel governments in Kenya as we speak??????????????? What a divisive little old man.

Fake Joshua knows if he become the president of Stone Hurling Federation they will not be able to pay him. Their economy will depend of fishing and stone throwing. He will have all the stone throwers with him and poverty on the front line

When you push people too far they have a right to react.How long will Kenya be ruled by two tribes.This cessation talk is not going away any time soon.

Why split into two?Just because we have two major parties?
My ngubaru teacher taught me that a choice from two political outfits is not a choice-it is a selection characterized by irrelevant factors such us names, tribes and the better of the two evils. A proper election involves more than two parties that is why for me Third Way Alliance may hold the key for future Kenya. Imitating the splitting why not into 8 parts ( # of presidential candidates)? Take the logic further, if you split into two now, then after 5 years the halves will split into twos and so on. In 25 years (half the 50 years independence) we may have 2^5=32, thirty two micronations. And absurdly, in 50 years (by this nasa logic) we will have a president for each clan-nations. We will have worked back into pre-colonial history faster than we civilized from the same.

This is a mad man in making. Period. First, they say the protesters are being killed, but blot out the fact the these protesters are infringing on the rights of others when they threaten and destroy property/businesses. I heard Miguna Miguna express how outraged he was that a 2 year old was brutalized/killed by the Police. That's just a lie as it's clear the child was caught in cross fire. His caregivers should be brought into book and charged with child neglect as they subjected the child into something beyond their control. The child did not choose to be there. The Police are deployed to uphold order.

Peaceful protest is done without violence, verbal or otherwise. Look at this mad man calling for division, who does that when they have children, elderly, disabled the poor and a country on it's knee?