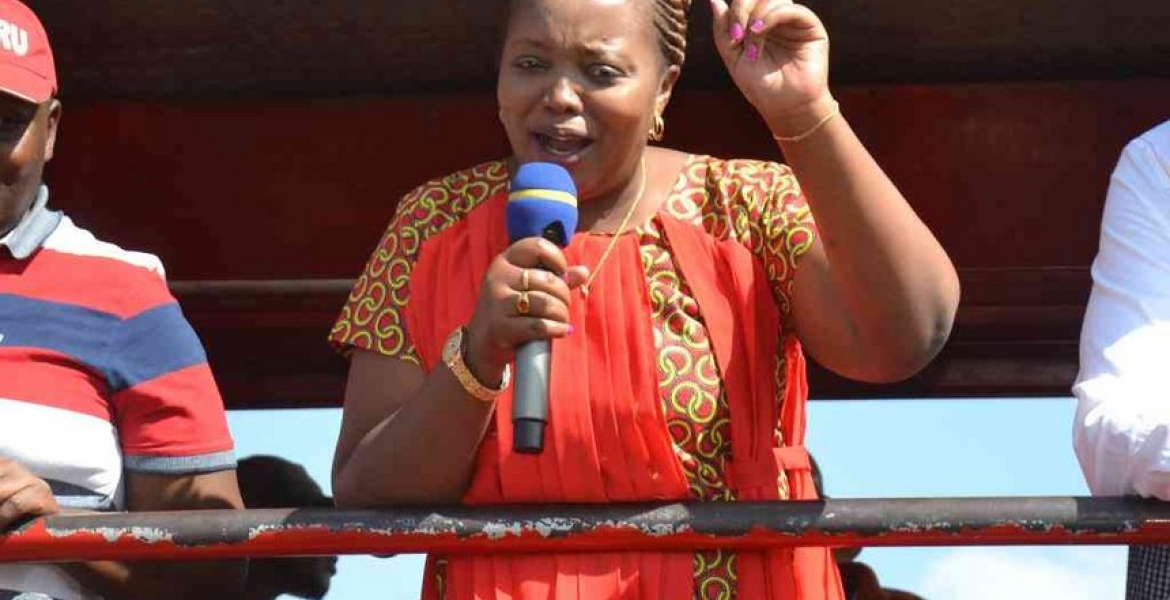 A section of women from Nyeri County have vowed to deny their sex to their spouses until they make sure they have voted for President Uhuru in the repeat presidential election set for October 26th.

In a meeting held at a hotel in Nyeri town on Wednesday, the women agreed to 'starve' their husbands on the eve of the Thursday's election so that President Uhuru would get the maximum number of votes from the region.

Led by Nyeri Women Representative Rahab Mukami, the women said the move will guarantee a big win for President Uhuru against his rival Raila Odinga of National Super Alliance (NASA).

In the run for August 8th election, former Prime Minister Raila Odinga was on the record asking his married supporters to refrain from sex on the eve of election.

At a rally in Homa Bay County, the Nasa leader called on residents to refrain from sex until he was declared the winner. He said; "August 8 will be a historic day and no vote will be left without being cast. Men will sleep outside. When the day comes, no man should sleep with a woman." The Orange Democratic Movement (ODM) leader had earlier told supporters that, "when you are going for war, sex is a bad omen".

If it was Raila saying What this Women are Demanding, SOKORA AngemSOKORA kweli kweli. ANYWAY: So long as Our Nyeri Women do NOT Cut Off Disable Our TRANSFORMERS, we NYERI Men are Voting for RAILA as a Gift and APPRECIATION for Him Saying "Kibaki Tosha" (to the Downfall of KANU and the Oppressive NYAYO Era). Kwa hivyo "Andu a Nyeri TUMUHURIRE Raila". Ni gwo ANDURUME a NYERI? Ni Wega! Thengiu Muno!! Ameni!!!

Please have some class. That is such crude language!

Ano. MOST Chang'aa Addicts Wake Up on Charm; not Suusu.

How can Kenya go so low! Where in the world would you hear women openly talking about using sex as a weapon for voting! Sex is a private matter between the husband and the wife.

This directive is a disgrace to men.Sex is not all that important ,except for creation.And for creation of a man or a woman, both sexes are equally important And if men are seeking sex for please only,.there are other ways to quench that thirst without a wife. So Nyeri men should tell their wives "thanks to prostitution".And then vote their conscience.
For all Iknow, some of these man may not even behaving sex with their wives so that directive may be mute for quite afew men...

I thought that was Raila's line? Honestly we are doomed if these are the people preaching to our young! Rot!!

Omera, please don't abuse my native language Kiswahili. Please write in your native language "Gikuyu" and google will tell me what you meant. In Kiswahili we don't say, "Njina," it's spelling is "jina."

Please Ndugu Omera, your language is not appropriate in Mwakilishi. Please, remember that Mwakilishi is read all over the world! You are embarrassing all the descent Kenyans globally!

and who told you your language or input is appropriate for mwakilishi - sasa wewe umekua judge mkuu to decide what is appropriate here or not - kwanini unaonanga kama watu hapa ni ihii who are not educated who live kwa nyumba za mbao na ndoro. you think your comments here or anywhere else are any special - mara ni holocuast, sijui muuaji toroitich na mzee jomo - meni we nduri kiongo kiega

Who are you to guide me on what to do?Mind your own business.

Your men are known to have difficulty saluting the flag on normal days so stop lying over here .You rarely get it so the eve of the 26th will be no exception.Your men would rather changaa than your behinds or is it front.

How many Nyeri men still have the ivory with them? They were cut long ago. Hakuna cha kunyimwa. Before you marry a Nyeri man make sure he has the ivory

After the true icon and leader Wangare Mathai, things seems to have taken a turn for the worst. She was for the environment, hawa ni pollute yote. She was for planting trees, hawa ni kata yote! Kuharibu sana ongeza Wamuchomba's presence "what I am worth"-what do you expect. Whatever happens in Nyeri must stay in Nyeri.

this is much a do about nothing!!!

@guest1, I don't camouflage and chameleon on this forum as you do. So, don't insult your friend Imara's intelligence by discrediting his ID. Tunaelewana?

Imara, mwelezee huyu mwenzio, lako ni lako, na langu ni langu. I am who I am and I make no bones about it!