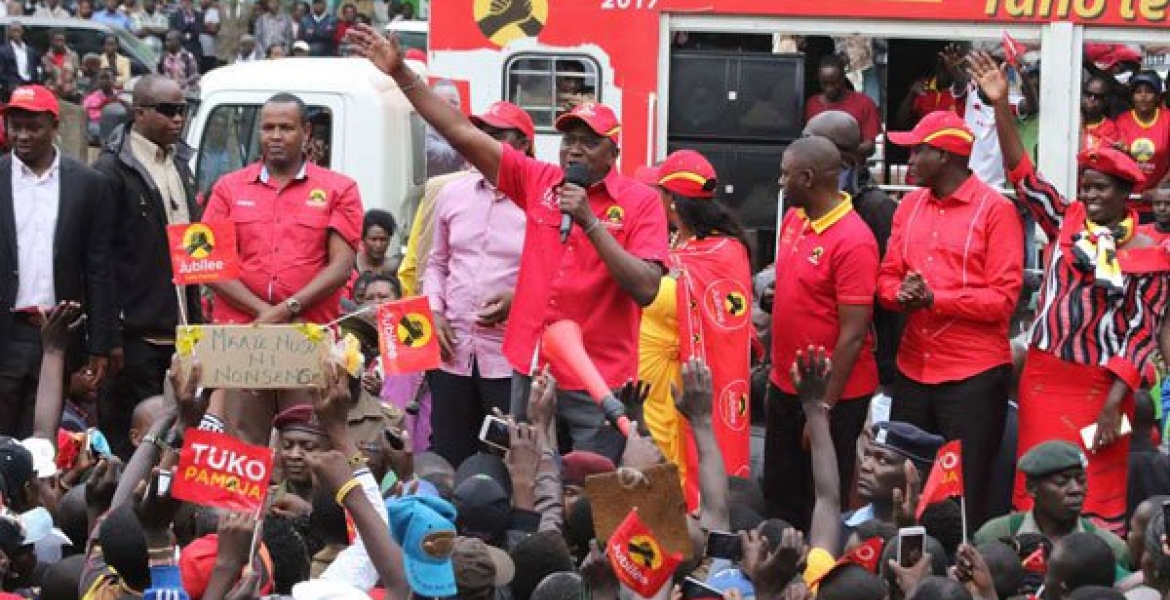 President Uhuru Kenyatta says that Jubilee is ready for next week's repeat presidential election and ruled out possibilities of entering in dialogue with National Super Alliance (NASA) leader Raila Odinga.

Speaking during campaign rallies in Trans Nzoia, Baringo and Laikipia counties on Wednesday, the head of state dismissed Raila's calls to discuss changes in the electoral commission.

Uhuru said the former Prime Minister should stop giving demands since he has withdrawn from the presidential race.

“We are ready for the election set for October 26 and I will not hold talks with anyone,” President Uhuru said.

“The only talks I will hold are with the people of Kenya, going to the voters to ask for votes. The IEBC (Independent Electoral and Boundaries Commission) has been supported by taxpayers with Sh12 billion and their job is to organise elections and not to hold dialogue with anyone,” he said.

The President added: “I heard that they (opposition) want to have talks with me. I have no time for such talks. If Raila is not ready to vote on October 26, then he can go and sleep in his house and leave alone Kenyans who are ready to exercise their democratic rights.”

President Uhuru further warned the opposition that attempts to disrupt Thursday's vote will be met with full force of law.

“Anyone who will attempt to disrupt the election or beat election officials will be dealt with regardless of their position. You cannot stop a democratic process.”

He added: “We cannot allow a few individuals to destroy our country.”

This comes after IEBC officials were attacked in Nyanza while attending a training session, with President Uhuru accusing Raila of instigating the attacks.

“Mr Odinga, we have respected your decision to keep off the election. Why do you think you have a right to deny Kenyans a chance to vote?” he asked.

As the 26th Election draw close our Military spokesperson should take a stand and draw
red lines which must not be crossed at Election date because never before have been before have we been in a state of Emergency. He should state clearly that security matters are non-negotiable .Under no circumstances can we become a failed state where nobody is in charge otherwise there will be chaos everybody wanting to ascend to the top. In the process of everybody wanting to go to the top there wars which cannot easily end. We all witness where there is no proper leadership there is chaos and everybody is fighting to become one. All Kenyans should look around what is happening around the world and learn from others miscalculations .We are on positive trend of development and changes do not come overnight they take time , we have to be patient. Patience is a virtue.

onkoba. Kenya has been a FAILED State Since 2007; when Karua (at the KICC Nairobi) Presided over the RIGGING in of Mwai Kibaki. And some Idiots Have Been Planning to RIG or Swear in Uhunye by Force. But the Majority of Kenyans are NOT taking this 2007 Repeat (Night Swearing in) NONSENSE Lying Down again. Not again!

Uhuru, you aren't indispensable. If you can't meet Raila, please resign. Before you resign, tell the people of Kenya the people responsible for deaths of Jacob Juma and Chris Msando. Toroitich betrayed the people of Kenya when he politically rescued you and assigned a political job that you were ill suited after the wise people of Gatundu turned you down.