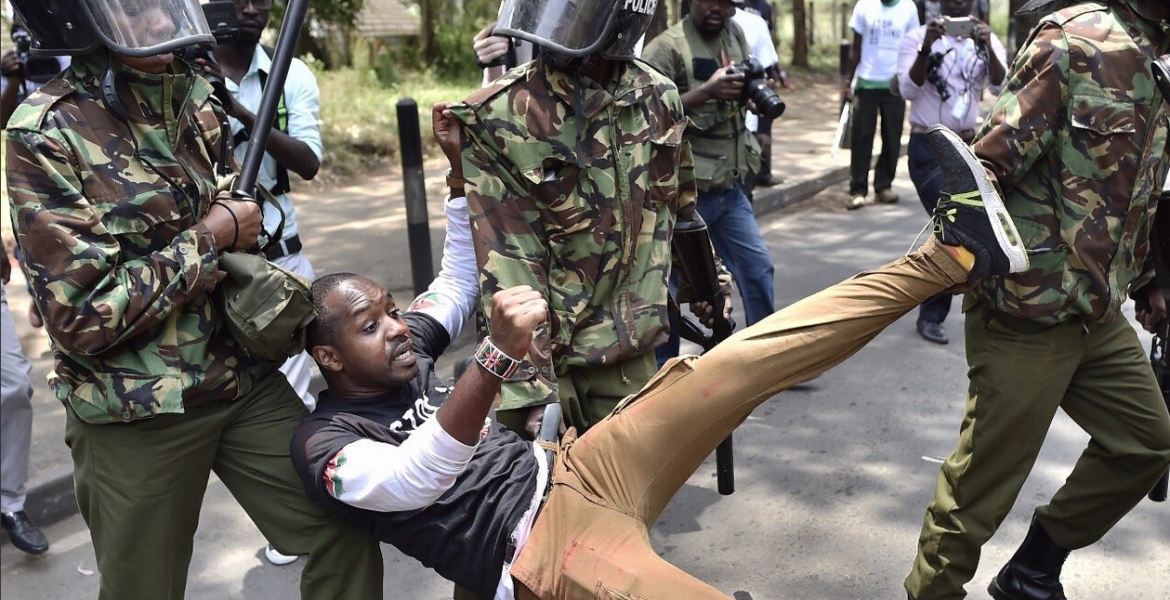 Kenyan activist Boniface Mwangi was treated for injuries at Kenyatta National Hospital and released following injuries he sustained while protesting in Nairobi.

Mwangi, who contested the Starehe parliamentary seat in the August 8th general election and lost to Charles Njagua Kanyi, says he and a group of demonstrators were marching towards Police Headquarters to deliver a petition to Inspector General of Police Joseph Boinnet against killings of protestors by police when they were stopped by police officers, tear-gassed, and clobbered.

“I have been treated at Kenyatta Hospital. X-ray done,nothing broken. Just a hematoma (a solid swelling of clotted blood within the tissues),” Mwangi wrote on his Twitter account after he was released from the hospital.

Kenya now looks like NAZI Germany! This is the kind of regressive leadership that Ruto and Uhuru have given the people of Kenya. Toroitich, please take your two incompetent projects back to where you got them! We the people will not allow Nyayo Days to come back to our beautiful land of Kenya again!

Long live the Republic of Kenya without Raila or Uhuru in our state house as the president of Kenya.

You obviously have not seen riot police handling hecklers and abusers of demonstrations in the US , Spain, Venezuela and even that Germany you are citing here. Lack of Objectivity blinded by hate and finding fault has consumed a segment of Kenyan population and why we can never compromise on anything !

Oh please, we know Boniface style of protesting is never peaceful , he is very aggressive and abusive to the police. If he wants to protest , go take pictures ( his former career as a photographer) and provide proof of the killings, that would be more credible !

I listened to the boy give an interview about his life etc and I can confirm that just like the NASA noisemakers, the boy has demons and needs deliverance. They are deceived by demons to think they are protesting for the right cause but it's just the work of violent demons they are manifesting. Be delivered, Boniface!

Ati you are protesting police killings the 26th Bado.All right thinking Kenyans who know that Uhuru does not deserve a second term just stay home.Do not even demonstrate let this Jubilee people vote for themselves the Judiciary will whip sense into them .This sham election will not end well.No more Kikuyu kalenjin supremacy.