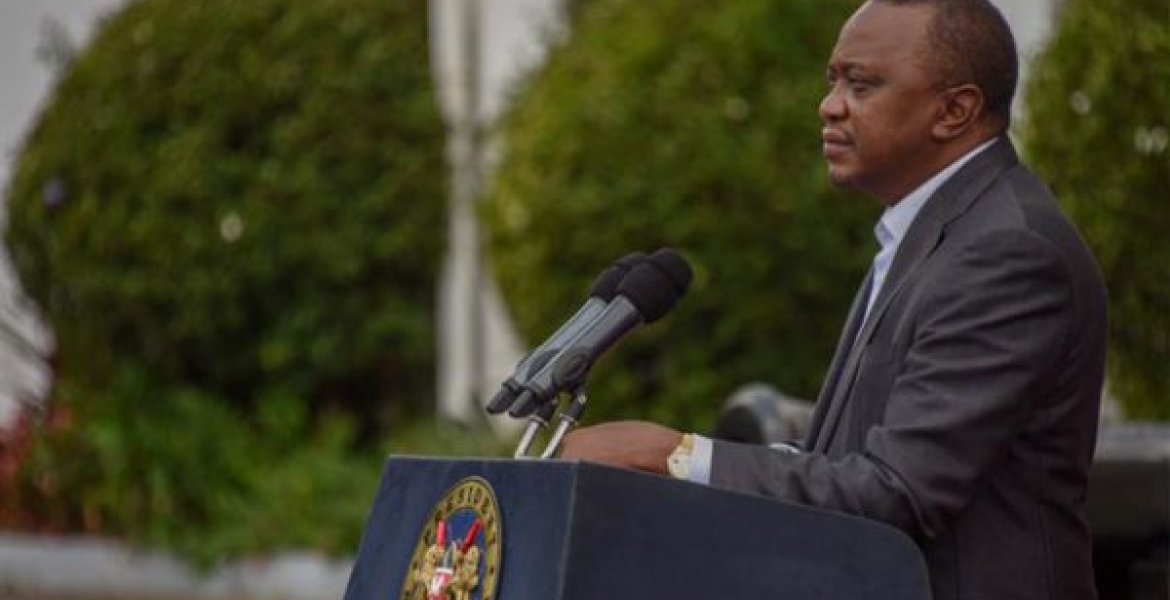 President Uhuru Kenyatta has called for a national prayer day on Sunday and urged Kenyans to pray for the country.

In a press briefing at State House in Nairobi on Wednesday, the head of state admitted the country was going through a tough time ever since the Supreme Court judgement that overturned his August 8th victory.

The President called on Kenyans to seek the ‘face of God’ as the repeat presidential election scheduled for October 26th fast approach.

"Scripture says that if the people who are called by my name will humble themselves, and pray, and seek my face, and turn from their wicked ways, then I will hear from heaven, and forgive their sin, and will heal their land,” the President said.

He added: "On that day we will be asking for God’s blessing for our nation: we will also ask God to abide with us, and to guide us, both in this period, and in time to come. We will pray for our leaders: that they may be granted wisdom, humility, and that they may love peace and justice. We will also pray for each other: for if your brother or sister asks you forgiveness, do not withhold it. For the truth is that the politics of the day is fleeting, but this nation, under God’s care, endures. We cannot let what is fleeting sully what is permanent.”

Uhuru said that the fresh presidential election will go on as planned despite the resignation of Commissioner Roselyn Akombe from the electoral commission.

The President also called for reconciliation amid high political temperatures in the country.

Uhuru, prayers are based on superstition. In case you have forgotten, Our freedom fighters did not pray, they acted!

If you want to pray, please pray alone with your family members, relatives, and friends. When you pray, please ask your god to reveal to you the people who killed Chris Msando and Jacob Juma. Please tell the nation their names on Monday. If you cannot, it shows very clearly that prayers are based on superstition!

Imara. Uhuru Goes to Church and Therefore: I Would the He Should 1st READ the BIBLE Book of ISAIAH Chapter 59 and then Get His Priorities RIGHT(eous) (before Going Before God). Amen!!!

Imara I agree, prayers may be useful to some, but it is not the solution. I would say, pray if you (plural) like but act you (plural) must. What will determine the result is the action we take. If we put Country first, then we will be guided to those actions that lead to that goal. If we choose inflammation, bigotry, etc, then our we will choose acts that lead to that path. Free will is not given. It is inate in us. Use it wisely.

I am soooooo sick and tired of this praying nonsense - everywhere you go in kenya today - pray pray pray - if we are soo prayerful, why are we also sooo evil, greedy, corrupt etc ? hii ni upuzi ya aina gani

If God says "Thou Shall NOT Kill"; and some people kill and the Next Day they want to Pray or Ask for Prayer. What Happened to REPENTANCE before Prayer? Ama Uhuru ANAFIKIRIA WaLuo na WaNASA syo BinADAMU?

ANYWAY: ISAIAH 59 says it all about the UhuRuto and the Kenyan Government. AMEN!!!

I believe prayers, meditation, the higher power as some may prefer to say has it's place and time. As a leader, I don't think Uhuru should be so vocal on this as he should, in my opinion be neutral in this lest he alienates people from other religions.

Majority of Kenyans are voting by ethnicity but there is a minority who are driven by religion. Anyway, it's all in good faith.