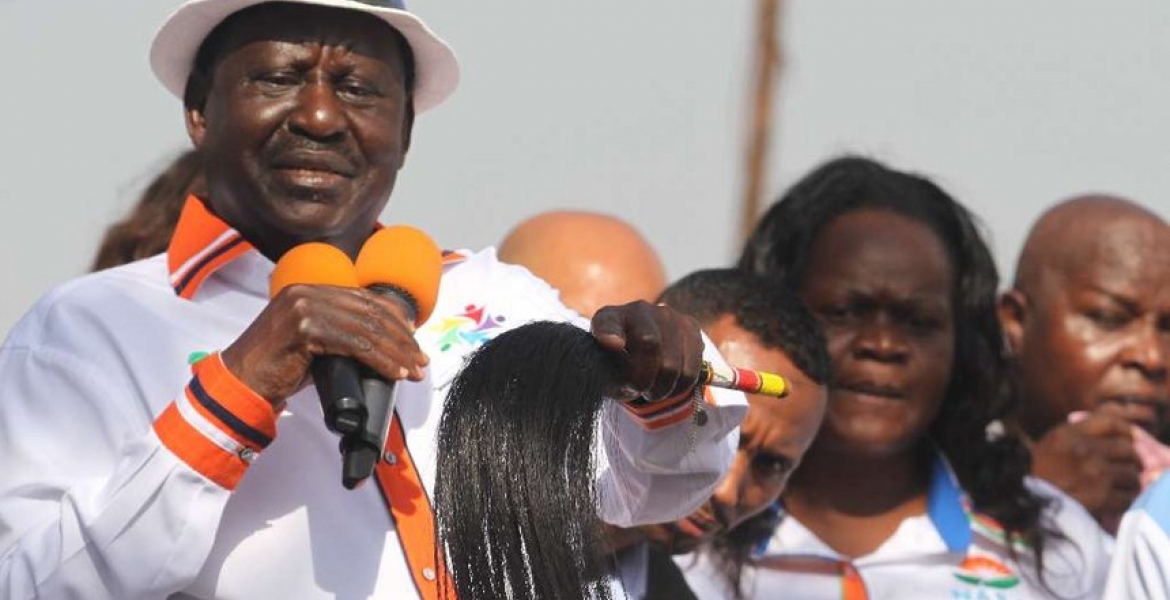 National Super Alliance (NASA) leader Raila Odinga has taken a jab at the five fringe presidential candidates whose names have been added on the ballot for the October 26th repeat election.

The former Prime Minister particularly appeared to have directed his rage at Thirdway Alliance presidential candidate Dr Ekuru Aukot accusing him of being a betrayer, and called on his spouse to divorce him.

Speaking at a rally at Mama Ngina Drive in Mombasa on Sunday, the Orange Democratic Movement (ODM) leader questioned Aukot's quick change of stance, despite an earlier pledge not to participate in the fresh election devoid of reforms in the Independent Electoral and Boundaries Commission (IEBC).

He told the cheering crowd that the man should be abandoned by his wife.

Odinga further said that he is disinterested with a coalition government and accused Deputy President William Ruto of being the mastermind of 2007/08 shared government between him and retired President Mwai Kibaki.

“Ruto was among the people who convinced me to accept the coalition government back in 2008. He even told me to accept and make him Minister for Agriculture… we are not interested in a nusu mkate government,” said Odinga.

We know it; you want Dr. Ekuru to divorce his wife so that you can marry her. NASA politics is now traversing people's homes. Wow!

This idiot is a true moron

Vitendawili Ojinga. Rubbish!!! Where were you When Raila was Fighting for Multiparty and the New 2010 Constitution? Watch your Idiot and Moron Statements that Mean and Make a Fool of yourself Vitendawili Ojinga.

When Eukot said It was NOT a Must for the Oct.26.17 to Continue with Raila: He had BEYRAYED the man (Raila) who had a Few Days Earlier ADVOCATED for Eukot to be on the Ballot. Eukot BITING the Hand (Raila) that was Upholding him is the Beef and Betrayal here.

We (of the Love of God and Unshuckled from Tribalism) Love Raila. He is ANOINTED of God and Covered by the Blood of Jesus. Amen!!!

Oh! great. The cost of betrayal is the wife? huh, Would you Guest1 divorce your hubby if Raila says so? I want to think not, but given your response above....maybe. Perhaps you have been working this hard on social media to get noticed by him psst psst...

MaragaA. You're a DOG Barking at a WRONG Tree (Guest1). And FYI: Raila is my Mentor; not my God. Just like THIEVING Uhuru is your Mentor; Wife SLAPPING Ruto your Mentor too.

Sorry Guest1. You are welcome to call me or anyone you like, any noun or adjective you like, if you think it will further your cause. Doesn't hurt my feelings! You will get all the attention you want, but baba loses one more every time they read you.

Ekuru is the man. Raila should be the one who should be left by the wife. He is full of nonsense.

Ougi. Do you why Luo Men have been Marrying Kikuyu Women (especially from Nyeri) Day and Night? Because Luo Men know How to LOVE Women and Kikuyu Men know how to Love MONEY; circumcised for NOTHING; Zero.

Luo men get dumped all the time by Kikuyu women.Their ability to make and multiply money is non existent.When a women gets children, her priorities shifts from kisses and roses here and there to the bottom line; FEEDING HER CHILDREN and making sure their future is secure and protected, ALL of which KIKUYU men do with utmost ease. Sorry if it stings a little.

Ekuru was fighting for inclusion on the ballot and not interested in demos.

Cirmcumcision is very relevant in ones self both under n in ones brain too but we can see who lacks both!!!The christians who follows the Bible knows what am talking about!Rao is truly a Pharisee.Elections will happen thanx to uhuru who have said military will man all western polling stations n if they decide not to come out to vote the 34b will b filled n signed as simple 0.Its not a must u vote in Kenya

Mkenya HALISI. Don't forget that Uhuru STOLE the 8/8/17 Election; Big Mistake in the Eyes of GOD. And FYI: God JEHOVAH is NOT Stupid and His Word and Name should NOT be used in Vain. NEVER! Amen!!!

My fellow Kenyans. We all have built in "forces of evil" and "forces of goodness."

The late Martin Luther King of the USA once said, "We must live together as brothers and sisters or perish together ad fools."

The moment has now come as Kenyans, when we must have the courage to work together as brothers and sisters.

The late Mwalimu Borito Kambarage Nyerere, the first president of the Republic of Tanzania once said, "It can be done, play your part." We must all play our part together as brothers and sisters and jointly rescue our beautiful land of Kenya.

Mara ,he tells wives not to have sex with their husbands unless they met certain conditions,now he is telling a wife to divorce her husband. Is he really Joshua...
Let's hear some response from Ekuru's wife or wives...

Maxiley. I thought you KNEW very well Raila was a Man of Parables, Riddles, and Metaphors. And there is NOTHING Wrong with that (compared to the ADVERSE Things Moses Kuria, Kabogo, and Sonko have said).

Raila needs help, he has gone completely crazy and those who follow blindly don't know it except his wife who has completely kept away this time sround as she is aware of the idiots condition.

Lordofpoverty. Poor people like you NEED Help and Counselling for Thieves of Everything including DAYLIGHT Stealing of a Presidential Election. And I think your INCESTRY Ancestry from Gikuyu (your Matriach) who Sired Children (Kikuyus) with His Nine Daughters is the MENTAL Problem source of you people. Your think Upside Down and Very Abnormal.

@Mkenya Halisi. "...Thanx to Uhuru who have said military will man all western polling stations..." And that will be the end of Jubilee as party devoid of conscience and humanity.
You seriously cannot follow or quote the Bible unless you are a Jew! This book was written by the Jews and for the Jews only. The same thing applies to the Koran. You must be of the Arab descent to be a Muslim. This book (Koran) was written by the Arabs and for the Arabs only!

Imara, never thought I'd agree with you but I do on that particular point regarding the bible and Koran. Now I only need to convince you to stop supporting Raila because you do even though you claim to be neutral, and start to to see something good in Uhuruto. Would you please try to be rational.

if IEBC officials are threatened what can anyone in that position do? Protect them just as it is important to protect any human being . Raila is misleading people who have little understanding of what rights they must stand for. This is Raila's war he wants others to fight to the last breath for him . He cannot be a president by the ballot but by revolution in the name of freeing Kenyans from Tranny. we know Raila is a political Prostitute otherwise he should not have joined Moi or Kibaki . He could have stood for the presidency on his OWN but he knows without leaning on others he will never win. He chose the wrong Partner Kalonzo who too cannot get him needed votes . This is his last chance hence

The Prince of Darkness cannot stand a man like Ekuru who is not worshipping.

maggie. Rubbish! How many votes did Ekuru get on 8/8/17. Comparatively Ekuru is a DROP of water and Raila an OCEAN! Come on!!!

Then why is he scared of him that he wants to take away his wife?

Imara I quoted those who follow the bible.I personally follow my gikuyu God who leaves up high on the top of mount kirinyaga.I don't worship white god,pope or Koran??Black Africans it's time for us to wake up n go back to our roots n stop copying other believes??Thaiii thathaiga ngaiii Thai

I never knew how Jews hated africans,till I watched EMPIRE FILES on you tube.Those who double me can check,and see how africans are treated in Israel.Disgusted friends asked me."what can africans do to get respect?".I said, they should stop imitation wazungu,they should start being proud of their culture,and social life, they should start leading the would in academics, technology,and discoveries,and they should stop being beggers of the west.
Yes Mkenya Halisi, Its time for mwafrika to write his own BIBLE.

On this one I agree with you, Imara, Mkenya Halisi and Ougi. Forget white Jesus and promote our own.

Mkenya halisi. I believe in God the Creator of Heaven and Earth: PSALM 121. Amen!!!

@Mkenya Halisi. I am very proud of you. Thank you very much for sharing your belief with us as readers of Mwakilishi.

This guy is nuts, very poor role model, mara he advice women to remove clothes and underpants in public, now he wants Eukot to divorce his wife akili kama ya mtoto.

I always wondered how Raila's wife Ida put up with him. Selfish and a moron who only want to have the title 'president' at the cost of lives of Kenyans. Why did he not protest ask us to protest the last say 4 years why wait until the ballot day. raila for president of ? even our wild animals will not vote for him