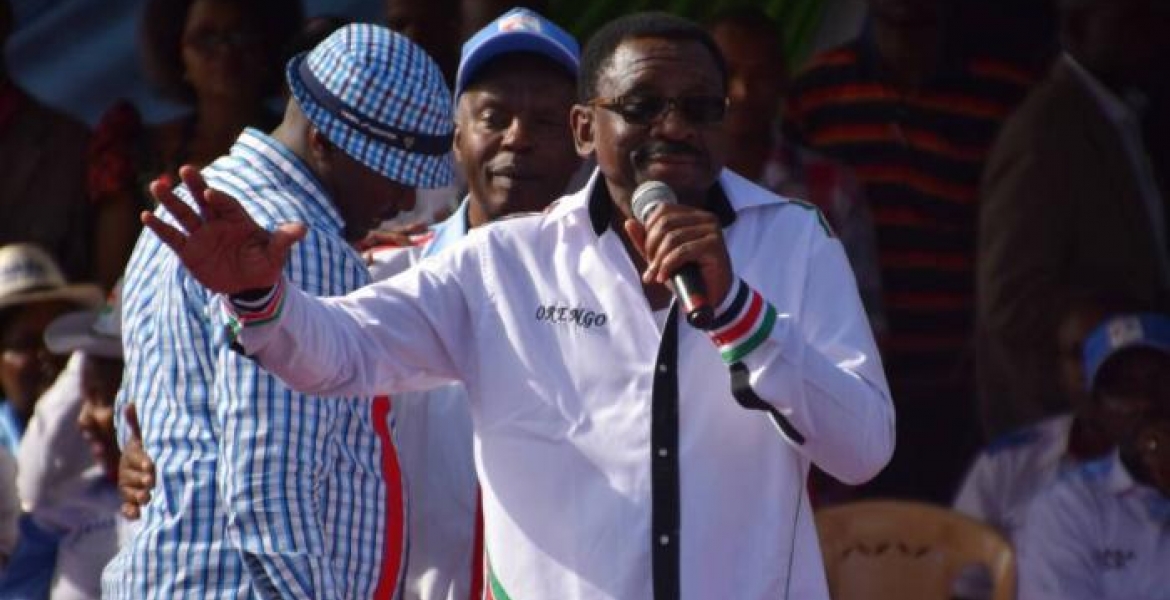 The National Super Alliance (NASA) has threatened to hold a parallel presidential election on October 26th.

Speaking during a rally attended by Raila Odinga at Mama Ngina drive in Mombasa on Sunday, Siaya Senator James Orengo said the opposition outfit would hold a parallel election to that by Independent Electoral and Boundaries Commission (IEBC) on October 26th.

"If President Uhuru Kenyatta and IEBC Chairman Wafula Chebukati go ahead with the elections, we will conduct our own election," remarked Orengo.

Orengo's remarks were echoed by several NASA leaders. NASA has vowed that there would be no election on October 26th and their candidate has already withdrawn from the race, citing lack of commitment by electoral commission to hold a free, fair and credible poll.

However, IEBC said it would not strike out Raila's name from the ballot because he had not officially withdrawn from the race by signing form 24A as required by election regulations.

Nasa said it will rally supporters in their strongholds to boycott the October 26th election.

“From Monday we will continue with street demonstrations, we are against the October 26 elections and we will boycott elections in Ukambani, coast, Western, upper and lower North Eastern, all parts of Homan Bay, Kisumu, Nyamira among other regions,” said former Machakos Senator Johnstone Muthama.

I thought #noelections, so now the new # is #parallellelections.. Desperation!

My head is spinning with all the yarn these guys are spinning! No elections, parallel elections, boycott elections...nothing is sticking. Even mandamano Mon were light. Chickens coming home to roost.

I dare them to do that. Raila, Kalonzo and Mudavadi you claim to be men contrary to the conventional wisdom. Now prove yourself to be one. I DARE YOU to hold a parallel election. If you don't then you are boys and you need to hold your breath forever.

This is total madness bwana Orengo.

Once appeared to b a smart lawyer mr orengo is now a stinking brainwashed stupid idiot??How can a senior lawyer talk shit like this instead of him following the law.Mr orengo don't u know u can disappear like many n forgotten in 2 wks.Relax military will b used in yr areas whether u like it or not.Aslong as materials r brot to yr polling stations which will b guarded by military if u chose not to vote the 34b will b filled 0 n signed by the clerk n sent to chebukati??Its that simple u take yr case to Supreme Court mkora maraga will easily quote materials were brot as the law states n pple refused to vote so don't think the SC will say something else unless they have bin bribed again

Mkenya halisi, there is something that cannot be taught in law school,or found in law books,and its called wisdom,and its "cousin" integrity. Orengo lacks both.

How will NASA hold parallel elections on the 26th. I think I call this day-dreaming. NASA has no money even to campaign and it’s main financier Wanjigi is under the wraps. Who will be on the ballot I wonder? NASA is caving in and pretty soon, NASA will be a party without legitimacy. It will be an illegitimate child but mind you, someone will have to pay the price of the more than 40 lives lost during the uprising. Hague is waiting for Raila, Kalonzo and -----you guess it.

You can bet in NASA's parallel election Raila will have no opponent and will be elected unopposed! That is the only election Raila can win. But unfortunately, even Maraga would find it hard to uphold THAT election! Orengo has become a rogue lawyer...

NASA will not dissolve or dissappear . You can only push people so far before they decide to take the law into their own hands.NASA will not hold parallel élections however their voice will not be suppressed and will get louder even after the sham élections.IEBC has refused to remove Baba's name from the ballot box so as to legitimise the election.It is a sham and Uhuru and his muscleman Matiangi will be held responsible for the loss of lives and destruction of propery that occurs prior during and after these sham elections

They say that "A Mind Is a Terrible Thing to Waste" particularly on perpetuating such fickle dreams. How do supporters navigate through this cacophony, ambiguity and sham-unless they are largely hypnotized.