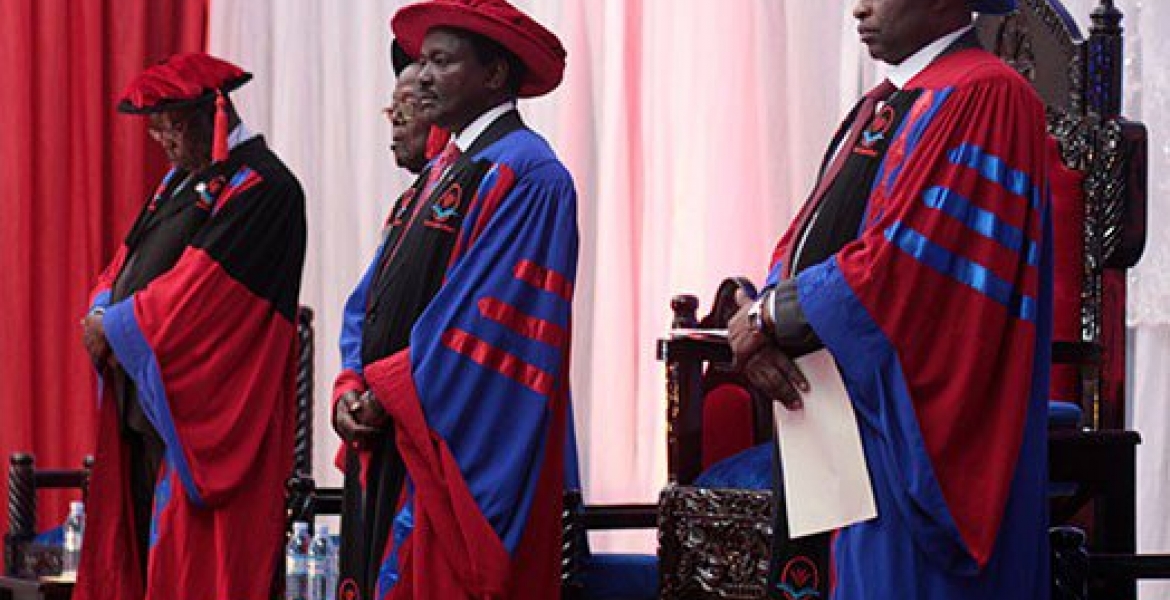 New Vision , a Ugandan government-owned media outlet, said that Musyoka had called on Ugandans to treat President Museveni with respect, because he deserves to rule East Africa.

“I have always thought that Ugandans should not start torturing Mzee (President Yoweri Museveni). He should be the first President of East Africa,” he said.

Kalonzo was speaking on Friday at the Uganda Technology and Management University (Utamu) during a graduation ceremony.

“He (Museveni) has passion and a strong spirit for the East Africa region.”

The National Super Alliance presidential running mate is the Chancellor of the Ugandan varsity and recently had his chancellorship extended by four years after serving since 2013.

In his speech to the graduands, the former Vice President said; “As you delve deep into the world, you will find that there are sharks in the world. If a shark circles your position, stand your ground, if you want to change the world, do not back away from the sharks. Punch them in the snout and they will turn and swim away.”

Yeah, Museveni as first president of East Africa and Kalonzo and his NASA team will be toast. Museveni does not entertain nonsense. So, now you want Museveni to run Kenya?

Raila will not be very happy... Anyway, Kalonzo refers to Uhuru as a dictator. Is it just spitefulness that makes hims reject his home-grown dictator for a foreign dictator?

Museveni has been in power for how long? He has changed the constitution to stay in power and jails his opponents. What kind of leader is he? A dictator. Shame that Kalonzo would endorse a dictator. Pole sana,

When will Kalonzo stop being an idiot, an embarrassment to the Ukambani people? Bure kabisa.

WHY WOULD KALONZO MUSYOKA ENDORSE DICTATOR YOWERI MUSEVENI FOR ANY OFFICE LEAVE ALONE THE PRESIDENT OF EAST AFRICA? HAVE YOU LOST YOUR MIND or do you one?

Museveni is like Mugabe old hags who cling on to power because they have nothing else to do. Kalonzo is just lucky that Raila made him relevant again otherwise he knows he is finished politically and will not stand a chance in 2022