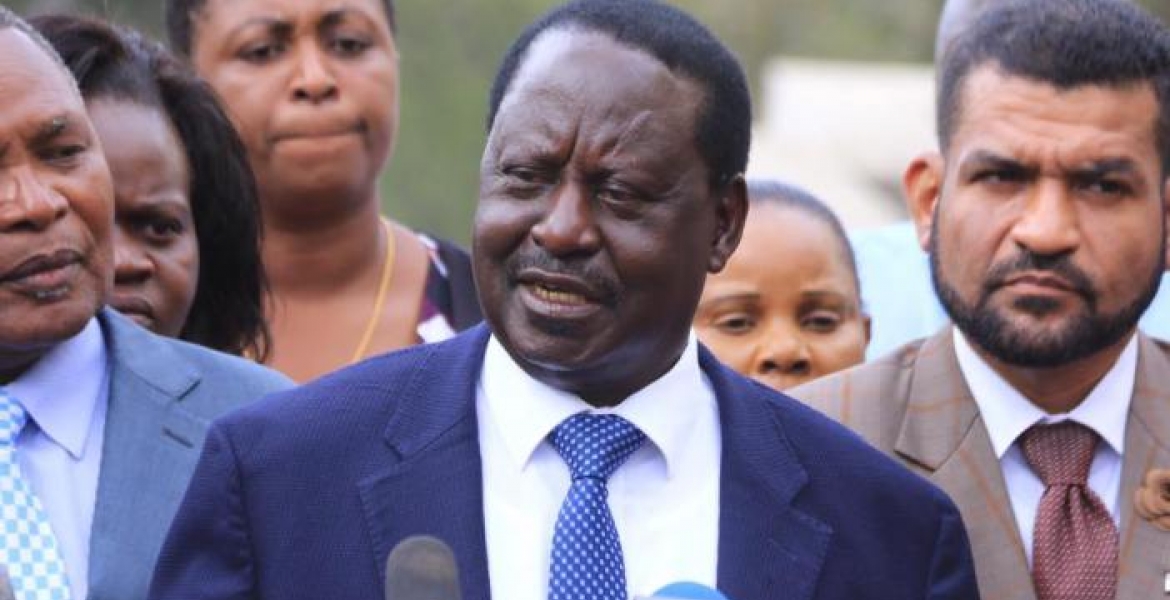 Opposition leader Raila Odinga has made fresh claims on how the August 8th election was bungled to the advantage of President Uhuru Kenyatta.

Speaking to the press after a meeting with Anglican Church of Kenya Bishop Ole Sapit on Friday evening, Raila alleged that perpetrators of last month's rigging scheme operated from a military installation in Karen area in Nairobi.

The former Prime Minister alleged that the algorithm that tilted the election results to favor President Uhuru was beamed from the Karen base.

"The cartels involved in rigging polls put an equipment at the military installation in Karen meant for conducting border surveillance," Raila said.

"The data was not coming from any polling station. This was a fraud of the highest order," Raila said after a meeting with ACK bishops in Nairobi.

The National Super Alliance Presidential candidate reiterated that he will only participate in repeat poll if the irreducible minimums issued to Independent Electoral and Boundaries Commission are met.

Raila has demanded that electoral commission's severs contracts with French IT firm, OT-Morpho that provided the technology deployed in the August 8th vote be terminated.

He also wants Dubai-based Al Ghurair firm be barred from printing the ballots to be used in the repeat vote planned for October 26th.

"The results sent to Servers in France did not return to the country. All the information from polling stations which were transmitted by Safaricom, Airtel, and Telekom did not come back from France." Raila said.

The opposition leader also said that the confirmation by Safaricom, through an advert that election results were transmitted to the IEBC server in the cloud which is based in France, vindicates NASA claims that the results declared by the electoral commission were fake.

"They have said it was the responsibility of the IEBC to transmit that information from there [France] to the tallying centres in the constituencies and Bomas," Raila said.

"The question that we now ask is: If that is the case, what were they tallying at the Bomas of Kenya and at the constituency tallying centres? It is a fraud of extreme gravity."

Raila also termed the proposed amendments of Election Law by Jubilee as extreme provocations to NASA and assured that he is ready for the election, but only if Jubilee will drop the amendments.

"You don't level the playground by placing obstacles on the way like the Jubilee is doing. The Bill is completely unacceptable," Raila said.

"We are saying that we are ready if the IEBC will be ready and if Jubilee will stop this kind of nonsense that they are trying to introduce through the parliament.," he said.

"Under those conditions are met, there will be no elections," the ODM leader said.

"They know if we go for an election they will lose. We have a large support base and that is why we don't have to be running around jumping from place to place."

"Unless the election is rigged, I can tell you for sure that we will beat Jubilee by a very large margin," the Opposition chief said.

I wish the Supreme Court had asked more questions about that 'kifaranga ya computer' formula (Y=1.2045x+c) and its implications. They would have spared Kenyans the fate of living with man's hallucinations. SCoK really let Kenyans down, and lowered its own stature.

haibu tuu. net make claims there was no power, claim EABL also had something to do with voters being drunk and forgot to come and vote for you. When can we resume sex? our wives are missing us its about time this order from you gets lifted including you. Just disappera from public arena. Unaji haibisha

Guys, our country is doomed. Just watched a clip on you tube show casing Sonko and that dirty guy who called Uhuru mtoto wa..... Shocking. These two guys are going at each other both calling the other shoga, umbwa, unanitamani, kama wataka kudungwa ni ta tuma....aki the insults in public are beyond this world and violate every fiber of my inherited culture. If interested watch the clip at https://www.youtube.com/watch?v=pvQ9G7LN8c4. Alternative cut and paste: FULL VIDEO OF BABU OWINO VS MIKE SONKO || SHOCKING INSULTS THAT LEFT THE COUNTRY WONDERING.